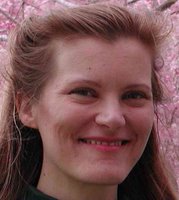 So — what are some of your favorite Regencies? I’m not asking for a definitive list, just list any that occur to you. Are they particularly risky ones, or classic Regencies, or does it vary?

I love many many Regencies, but included on my favorites list would be:

— “Sweet and Twenty” by Joan Smith. I suppose it’s risky in a way, in that there’s a lot of politics involved, and perhaps less romance than in a “classic” Regency. But for an older Regency, I wouldn’t exactly call it unusual (except that I like it so much!)

— “Poetic Justice” by Alicia Rasley. Again, this isn’t a book with just a romance plot — there are a lot of other things going on. But again, I’m not sure it screams “different!” (And if it did, wouldn’t that be odd? My other books would be so annoyed when they were trying to sleep.)

— “An Ideal Bride” by Nonnie St. George. Stylistically this is somewhat risky, I think — it’s delightfully weird in some ways, almost farcical at times, and occasionally just a tiny bit surreal. I think she made a big splash with this book partly because it was a bit unusual — but it’s so very funny (and sexy too) that that alone could have made the book so popular!

Well, there are three from me. How about you?

You know, this is a horrible confession, but I don’t read that many regencies. I get very annoyed if I find things wrong with them (like servants wearing late Victorian uniforms), and I’m always afraid I’m going to start one, like it, and then discover the heroine doesn’t want to get married, and opens a Hallmark storeto save the family from ruin (another pet peeve). Or I’m afraid someone is going to steal my plot, or have such a brilliant one I can’t resist it and will have to steal it myself.
So I have rather a short shortlist.
“Slightly Wicked” by Mary Balogh. I think that’s its title–it’s the one where Wulfric falls in love. It’s a tribute to “Pride and Prejudice,” or at least that’s the way I read it, and so far (I’m catching up here) the best of the lot.
“No Man’s Mistress,” ditto. Has a heroine who actually trades her virtue instead of starving. Go, girl.
“Almost a Gentleman,” by Pam Rosenthal, whose heroine cross-dresses as a dandy. Oh, anything by Pam, she’s brilliant. Also her novella, “A House East of Regent St” in the anthology “Strangers in the Night,” and “The Bookseller’s Daughter,” which isn’t actually a regency, but it’s only about three decades off, and set in France–close enough, right?
And similarly, I loved Jo Beverley’s “A Most Unsuitable Man,”–what a great hero. Great clothes, too. But not a regency.

I’ve been thinking about this all day. I have lots of favorite regencies, but only a few I’d call “risky”. Two of my favorites have heroes who are virgins. I hesitate to name them because it would be a spoiler. Sometimes I get tired of the amazingly experienced man and ignorant woman. How about both partners figuring it out as they go along, just like lots of us had to do? Inexperience does not make sex less tender or loving.

One book I will name is Adele Ashworth’s “My Darling Caroline”. I agree with Janet that it’s annoying to read about heroines who think they can be independent and start a business and save their families. In reality, a regency-era woman who had to save her family did it through marriage. In MDC, the heroine is a brilliant woman with dreams of running of to America to pursue her studies, but gives up her dreams to marry the man her father has promised her to. I think this book is risky because the heroine is *true to her era* while many authors try to impose 21st century values on 19th century women.

You make some excellent points, Phyl! When thinking of what makes a Regency risky, the first thing that pops into one’s head might be something like a high sensuality level, or an unusual setting. And while those are quite valid, it could well be argued that being really true to the period is even more risky! Now that you point that out, several such books have occurred to me. Well, authors, really — pretty much any Regency by Sheila Simonson or Carla Kelly could be considered daring in how they didn’t cater to modern tastes in some ways, but tried to be a real reflection of how things were in the period. Of course, both of those authors did quite well, so who knows? Maybe risky is all in the mind . . . 🙂 Or maybe authors as good as Sheila Simonson and Carla Kelly can make that work, but perhaps not everyone . . . I haven’t read Ashworth’s book, but I’ll keep my eye out for it! It definitely sounds interesting.

Hi Phyl, I think I know at least one of the books you are talking about! And since it is revealed that the hero is a virgin in chapter 1, I don’t think it’s much of a spoiler to name it: “Snowdrops and Scandalbroth,” by Barbara Metzger. Extremely funny, and one of my favorites of hers, along with “An Early Engagement.”

Sheila Simonson’s book “Lady Elizabeth’s Comet” was one of the first Regencies I read, and remains one of my favorites. One thing I particularly admire about it is that the romance develops between the hero and heroine over the course of a year, in a way that I found particularly convincing. I don’t know if that’s risky, but it is quite different from many romances, where hero and heroine go from loathing to love in a matter of days.

Of Heyer’s books, I’ve always greatly liked “Faro’s Daughter” (which has one of the most combative relationships of any romance that I’ve read, but still works) and “The Unknown Ajax” (where the hero is basically putting everyone else on for almost the entire book).

In the risky category, I would probably include “Libby’s London Merchant” by Carla Kelly, though to say why it’s risky would give too much away; I guess anyone who hasn’t read it will have to go and do so! It’s not an altogether comfortable book, but very good.

I’m not good at narrowing down lists, but these are a few that leapt to mind.

One of my favorites is The Notorious Rake by Mary Balogh–risky because of the very first scene, no less. I also love The Abandoned Bride by Edith Layton, which is risky because of the relationship between its hero and heroine, and the secondary character’s personality. I too love Carla Kelly, esp. Reforming Lord Ragsdale, the hero of which is very unheroic, at least in the beginning. Like Janet, I get annoyed with the heroines behaving like twenty-first century ninnies rather than the nineteenth-century ninnies they are, but I don’t usually notice inaccurate historical details (which is why I know I’ve made mistakes in my own book).

Todd,
I forgot about Metzger’s S&S! That makes 3 virgin heroes.

I’ve never read Lady Elizabeth’s Comet, so I’ll have to look for it. I have to say that I read romances for the *romance*. To see one develop over time sounds risky to me! Because it does seem sometimes that the h/h fall in love and the reader has no idea why other than the fact that the author tells us so. What do they see in one another that makes them love each other? Certainly love comes to people in all kinds of ways, but sometimes it just creeps up on you. I realize you have to have a plot that throws the h/h together, but sometimes the mystery/conspiracy/theme du jour takes over and the romance is lost. So is it risky to concentrate on the relationship?

I do like the romance to be believable, and to go beyond love (or lust) at first sight; but with some books, I fear that the demands of the plot don’t leave as much time for the development of the romance as one might like. “Lady Elizabeth’s Comet” has a fairly subtle arc, that leaves plenty of time for the hero and heroine to get to know each other.

I agree with Megan that all ninnies should be true to their times. 🙂 I must admit, though, that historical inaccuracies do bug me a bit, though not usually enough to make me dislike the book (except in extreme cases). The technobabble on Star Trek makes me wince, too, but I still watch the show(s)…

One of my favorite trad Regencies ever is “Christmas Bride” by Mary Balogh, which I think I would consider “risky”–the heroine, a widow, has sex with the hero in (I think) Chapter One and gets pregnant. The hero is some kind of rich merchant, not an earl or duke. The heroine is the “tormented” character, who is redeemed by her love for the hero, who is a very good man. I LOVE tormented heroines, and there are never enough of them, LOL!
The very first trad Regency I ever read, when I was about 9 or 10, was a Marian Chesney, “At the Sign of the Golden Pineapple”, where the heroine ran a Gunter’s-style pastry shop. It’s been a long, long time since I read it (I don’t think I even have a copy now), but I was enchanted. Chesney seems to be an author a reader either loves or hates–must be risky. 🙂 Her characters and settings are very “real”, sometimes flawed or messy, and I enjoy that very much. I’m not much for the “teacups and ballrooms” stories, though heaven knows some of my characters have gone to ballrooms enough!