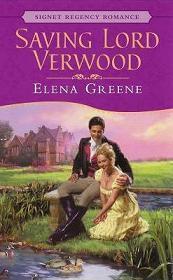 Here’s the cover I was talking about earlier. Is it any wonder Verwood has such a big smile on his face? Or maybe he’s telling her to lean over just a little further????

And watch his hand! Cleverly positioned, if you ask me… 🙂

Elena, just curious — when you submitted suggestions for your cover, was this your number one suggestion? (Two? Three?)

Did they pretty much follow your suggestions for clothing and such? (Obviously, they changed your heroine’s hair color!)

LOL! I was inspired to take a look at my shelf of “keeper” Regencies to check out the covers. On the older covers, the main problem appears to be too much blue eyeshadow, but there is quite the trend for cleavage in the newer images. Lots of young Regency ladies unable to stay in their tiny bodices. 🙂 I wonder why?

To answer Cara’s question, I actually didn’t (gasp!) specify clothing. I think I just said something suitable for outdoors. Was I foolhardy, or did I just ditz out?

As for scenes, I gave only 2 suggestions and made sure they were both out doors. Much of this book is in Cornwall and I hoped to get some feel of the setting. I sent in a picture of Trerice House, a real place in Cornwall that I used as inspiration for Verwood’s home (there’s a pic of Trerice House on my website). The house on this cover isn’t exactly what I sent, but at it is very similar architecturally–not a Palladian mansion or something like that, which would have been completely wrong for the story.

Anyway, maybe they were right. It’s a nice cover. He looks hot, she’s cute and not everyone associates that shade of purple with Barney the Dinosaur!

I still would have liked a beach scene. Maybe I should have suggested the skinny-dipping scene instead…

To answer Amanda’s question… Maybe the bodacious bodices are intended to convey a heightened level of sensuality?

I really like the light in that picture, Elena. Though I agree, I don’t see how seal pups would be more cutesy than ducks. 🙂 I do like the manor house a lot. Interesting to know they clearly looked at the photo you sent in! (I suspect they don’t do that with characters so much, though — after all, they’re using models, so the characters look like the models most of the time. If they didn’t, I’ve have sent in a picture of Russell Crowe for my hero!) 🙂

About your sensuality theory — we should check it out, Elena! My book is very, um, restrained as far as sensuality goes, and my heroine’s got her little chest all covered up — so that’s two out of two so far . . . 🙂