Another place–Genesee Country Village and Museum 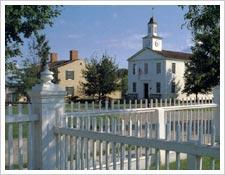 In reading the last post about favorite places, I thought of how long it has been since I have gone to a magical spot just for me. I love historic places, and they are great food for the muse.

I’ve been to a few places in the past that I loved. Here is one: The Genesee Country Village and Museum. It is a living history museum in Mumford, N.Y., just 20 miles from Rochester, and its focus is the 19th century.

More than a historic village, it has activities, classes, scheduled events, gardens, a nature center, an art gallery, and a carriage museum. But in my particular experience, the stand-out event was the day I attended a reenactment of the Battle of Gettysburg.

The Union troops mustered in the town square. It was a hot July weekend, and I remember with a little of the thrill I felt then when the sky rumbled overhead. The men cheered–and soon we were standing in a pouring torrent.

I took shelter on the front porch of one of the houses with other visitors and waited for the event to start. We heard the approach of the confederate troops from the edge of town and the distant sount of musket fire…the battle grew closer, and then the union troops were retreating through the town in front of us, in the pouring rain and the fog of black powder smoke, the soldiers nothing but hazy figures, running, reloading, firing, calling out, falling–and of course as they do in reinactments, getting up and running again–but I ignored that part. It felt eerily as though I were really there in Gettysburg.

It did not pour on any of the days of battle (July 1-4, 1863) but it was overcast with some thunder and light rain. But something about the scene that day seemed so utterly real to me. It is something the hazy photographs I took do not quite bring back, but the memory of the feeling I had is more than enough.

Has anyone else had such a transporting moment? I wonder how many of us are historical site buffs who read and write Regencies? I’d be willing to bet most of us are…

When I lived in New Jersey, I used to love to go to the battle reenactments. We also saw reenactments of Washington crossing the Delaware — very cold, for this native Californian! 🙂 I recall one living history person showing me close-up every step of just how an 18th century soldier would fire and reload his musket — and the Regency muskets were much the same. Very useful!

I’ve never seen a reenactment, but I did visit the Bounty (yes, that one, and some nearby Pirate reenactors demonstrated the firearms. That was cool.
But since nobody shoots anybody in my books thus far, it hasn’t helped my muse get her butt in gear and help me write.

Ah, well, Megan, my hero in GAMESTER is ex-military, so I needed to know something about firearms! 🙂 And sabers, and artillery, and . . .

Now keep in mind, all of this was serious research — I didn’t learn it for fun — by no means! — nor did I learn it so I could better understand the Sharpe movies — or so I could better understand my husband when he starts going on about squares, and lines, and formations, and flanks — which is not to say ANYTHING negative about my husband’s flanks — oh dear, I think I’d better stop before I saying something I shouldn’t. 😉

Actually, in a British Infantry battalion of the time, the “flank companies”–that is, the companies that would stand at the two ends of the line when the battalion was drawn up for battle–were the elite companies of the unit: the light company, and the grenadier company. They generally had the best soldiers and officers, and were sometimes separated out to fight when extra-special troops were needed.

The moral of which is: you should always be proud of your flanks.

Hey, you’re FLIRTING! It’s nice you guys still have that spark, even after marriage. And Todd? If you ever find yourself in one of those marital discussions with Cara, remember she knows all about firearms.

ALGERNON: I know perfectly well whom she will place me next to, to-night. She will place me next to Mary Farquhar, who always flirts with her own husband across the dinner-table. That is not very pleasant. Indeed, it is not even decent . . . and that sort of thing is enormously on the increase. The amount of women in London who flirt with their own husbands is perfectly scandalous. It looks so bad. It in simply washing one’s clean linen in public.

— Oscar Wilde, The Importance of Being Earnest

Hmph!! I am shocked, I repeat, shocked, by the scandalous behavior in this once gracious literary salon. Quick, my vinaigrette, please, I think I am feeling quite faint…