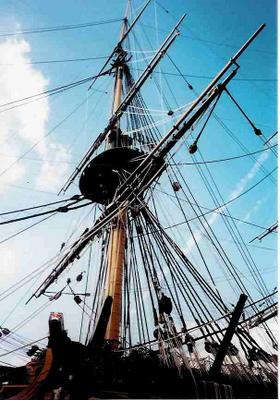 This is Horatio Nelson’s flagship, Victory. If you have a chance to visit Portsmouth, you can even tour it! It’s fantastic. (Though very popular — the first time I took a daytrip to Portsmouth we arrived by noon, and all the tours were already full for the day! And this was a Wednesday. Though for all I know one can now book a place ahead of time…) 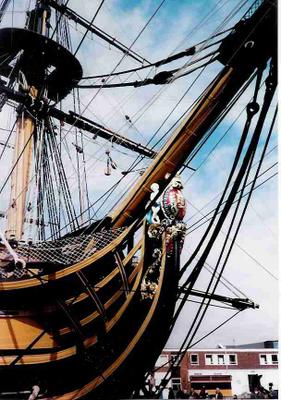 I don’t know why Regency warships are so beautiful! They were highly functional, yet somehow their lines are just gorgeous. That’s one reason I love the recent Horatio Hornblower television productions (starring the oh-so-nice Ioan Gruffudd, who also makes a hunky superhero) and the film “Master and Commander: the Far Side of the World” (starring the also very delicious Russell Crowe.) 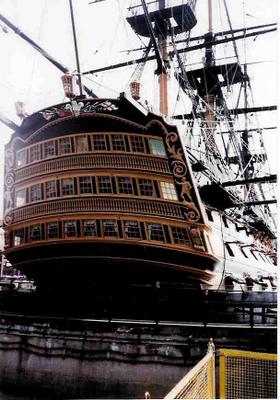 Are there any other fans of Hornblower or Aubrey here? Of the films, or the books by C.S. Forester and Patrick O’Brian? What do you like or dislike about the books or the cinematic productions? Or have you buy any chance toured the Victory? What did you think? 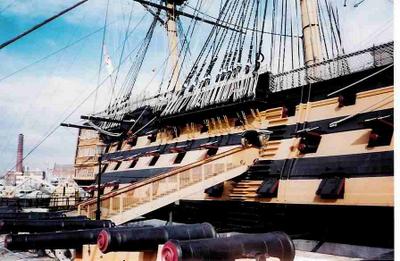 Oh, me, me!
I loved Master & Commander, the movie. I tried to read the books, but just got a headache–I don’t feel bad, though, because my dad, the owner of the ocean-going dory, couldn’t get it through it either.
I have Hornblower on my bookshelf, and I just requested the first four episodes of the series from the library.
I toured the Bounty, and the only thing that struck me was how small the ships were–our 6′ heroes would’ve been constantly banging their heads, not to mention being unable to stretch out to sleep anywhere.

I enjoyed Master & Commander, too, some strong drama and what seemed accurate details (though I haven’t studied naval history much). And afterwards I wondered if I could ever write shipboard romance. I knew about the weevils, on an intellectual level, but seeing them on the big screen…

And I blush to admit I haven’t seen any of the Hornblower series. My excuse is I got “the call” while in the family way with my second daughter. Between the kids and meeting deadlines I just don’t seem to find time for all the books and movies I want to enjoy. I’ve only read 1 book and seen 2 movies in the Sharpe series (loved them all).

So many books, movies and hunky men, so little time…

Oh, I love the Sharpe series! 🙂

One thing I thought was really interesting about the film “Master and Commander” was that, for the most part, it was totally nonjudgmental. There were class issues, the movie showed children in the military (getting wounded and/or killed), there was superstition, there was drunkenness, etc etc — it seemed a real slice of life, without a lot of that modern-movie “interpret it for modern people and acknowledge that the wrong parts were wrong” thing. It just showed it, and didn’t say whether it was right or wrong. (I fear what I just said is as clear as mud! Well, it makes sense in my head.)

I’m a big fan of the O’Brian books (which, in addition to being marvelous tales, are full of humor and beautifully written), and the C.S. Forester books, too. And, perhaps surprisingly, I loved the Master and Commander and Horblower movies as well.

I must admit, before I saw them I had my doubts. I went around muttering darkly: “Master and Commander and The Far Side of the World are two different books! What are they doing?” And “Can Russell Crowe put on enough weight to play Aubrey?” And “Paul Bettany? He’s tall and blond! Nothing like Maturin!” But when I saw the movie, I didn’t care. It was really excellent. As far as I could see, a very realistic depiction of the time; dramatically powerful; and true to the essence of O’Brian’s characters.

My one remaining pet peeve: “Master and Commander” was a rank in the Royal Navy of the time, the equivalent of the modern rank “Commander.” It is also the title of the first book of the series, which follows Aubrey in the time after he is first promoted to Master and Commander. The story of the movie, however, was taken from a later book: “The Far Side of the World.” In that book, Aubrey had long been promoted to Post Captain. So it’s a little like having a movie called “The Freshman” in which the main character is a senior.

With Hornblower, I knew less about the films before I saw them on PBS, though I had read the books. In the books, Hornblower is remarkably able and brave, but torn by insecurities and self-doubt. When the movies came out, they didn’t keep too closely to the stories, but they were still very good, and very entertaining, and again kept the essence of the character true to the original. Ioan Gruffudd was disappointingly handsome (Hornblower is supposed to be ordinary-looking), but a very good actor, which I guess makes up for it. 🙂

Though actually, I think my wife was not disappointed that Gruffudd was so handsome. In fact, I’ve even heard her use words like “hunky” in reference to him. Oh, well.

I like the Sharpe books and movies, too–they are not all equally good by any means, but overall they make a very strong series. I felt that rather more liberties were taken with historical accuracy in those movies than in the Hornblower ones, and more in those than in Master and Commander, but I imagine budget issues played a large role in that. And it’s nice that Sean Bean gets to play a hero occasionally. 🙂

Anyway, that’s more than my two cents–more like a buck twenty-five–but I’d be interested to hear anyone else’s opinions about the books or the movies.

I have to agree that Gruffudd is “hunky”, though what was up with that weird facial hair formation in King Arthur? Eek. 🙂

Anyway, I saw a very interesting news piece today about a recreation of Nelson’s funeral in London, since it’s the 200th anniversary of his death. It sounded very moving, and I wish I’d been there.

That’s interesting about recreating Nelson’s funeral–I wish I could have seen it! I’ve read a couple of eyewitness accounts of the original, which make it seem like really something.

Incidentally–and ruthlessly bringing Naval Fiction back into it–in one of the Hornblower books, he is put in charge of the funeral barge for Nelson, and has to make a last-minute change to the procession when the barge starts taking on water!

Love both series (Hornblower, Aubrey) far too much for my own good. Would probably be expelled from any decent fanclub however, as prefer movies to books in both cases. Absolutely adore Hornblower tv series, but could not get through all novels. Could watch Master and Commander over one hundred times. Probably have. Have read some Aubrey-Maturin novels, could not get quite so attached.

Karin, I agree with you. In both cases I too liked the movies better than the books!