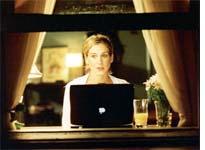 let’s talk about me.

My book, A Singular Lady, comes out in stores in less than two weeks. Ten days, to be exact, but who’s counting? My editor sent me one copy of it, which is now crinkled, stained, and worn because I’ve been hauling it around to show off if anyone asks what I do besides stay at home with my son.

I’ve read a few bits of it, too, when I’ve been waiting for someone to ask me what I do besides stay at home with my son (um, did I say that? I meant waiting to save a puppy or make chocolate from scratch. That’s what I meant). It feels as if another person wrote it. I certainly don’t remember tapping out some of those words on the keyboard.

I do remember, however, when I knew I would finish writing it. I was at a music industry conference talking with a Very Important Music Journalist and I mentioned what I was doing in my theoretical spare time. I told her the bare concept–my heroine writes a column detailing her husband quest–and she replied, “Oh, Sex And The City in the Regency.”

A ha! I thought. That made it all so much clearer.

And thus was I introduced to the high concept, a buzzword that’s since been cutting a swath through writers’ conferences. The High Concept is a sentence, sometimes only a sentence fragment, that describes the book (or movie, or TV show) in a succinct, catchy way.

So when I pitched my book at those same writers’ conferences, I’d say “Sex And The City in the Regency,” and editors and agents would nod excitedly and ask me to send a partial and synopsis. Which is, in fact, how my book sold–I pitched it to an editor and an agent at the same conference and it sold to one and I got representation from the other.

And while you’re thinking about that, I’ll be off saving a puppy.

There’s a theater somewhere in the U.S. that performs adaptations of Georgette Heyer novels (among other things.) Once a friend of mine was trying to convince someone at our local repertory theater to consider doing one of those adaptations — and the person had never heard of Heyer. My friend was trying to explain Heyer’s books, and I could see it wasn’t make an impression. So I jumped in. “Think Jane Austen meets the Scarlet Pimpernel” I said. Her eyes lit up.

(Unfortunately, the theater went out of business soon after…)

I always fall on my face trying to do high concept. I remember describing my novella A House East of Regent Street as The Beggar’s Opera meets Last Tango in Paris, and it thudding (well, of course, who cares about The Beggar’s Opera except a few English majors and who except me remembers Last Tango? Tending toward the recherche and the forgotten really isn’t a smart way to go).

Megan, your story does sound so fun, and I’m looking forward to reading it. The power of “high concept”…

But I have to say the whole concept of “high concept” really bothers me sometimes. Maybe it’s the Regency Nerd in me, the fact that I don’t have a problem with the pace of a 19th century novel, that I have an attention span far greater than that of a gnat… It just bothers me that in order to appear marketable, a novel must now be boiled down into 1-2 catchy sentences, often referring to some other commercial story (and hence implying that this one will be just as commercial). I’ve also noticed that some “high concept” stories don’t live up to their promise, as if things like sound plotting and characterization got lost in the rush to market.

But the other side of me lives in the real world. That side applauds you for coming up with such a great hook for your story.

And yes, I’m a sell-out, because I’m working on something now that I hope to pitch as “high concept” too.

Pam, I think that’s a great description of A House East of Regent Street, but then I’m one of those sad, bewildered English majors. Last Tango occasionally appears on cable so it’s not wholly forgotten.
As for my high concept, I found the term “Regency chicklit” worked like a charm. I could not for the life of me come up with a high concept definition for Dedication.
I think it’s a fad, but as always, if the writing doesn’t deliver, what’s the point.

Megan, I think “Sex in the City in the Regency” is very clever, and seems to suit your story very well. I myself often run into problems with the “high concept” concept, because either I come up with the concept first and try to build a plot around it (and then somehow my creativity stalls out. It’s a very stubborn muse). Or I just have a hard time coming up with a blurb that sounds interesting and intriguing. They just sound silly. (“Desperate Housewives meets Harry Potter, with a splash of Hindu mythology”–not a real idea, BTW, just something I came up with while sitting here). And, as Elena said, sometimes catchy concepts don’t hold up as well in the actual book. But it seems to be the current trend, so I’m practicing my concept for my new WIP. Dangerous Beauty meets Shakespeare in Love? Nope. The OC in the Renaissance? Not it, either. Keep working. 🙂

Thanks for the feedback, everyone. I must say, my story doesn’t really resemble Carrie Bradshaw and Friends’ lives very closely–it was just when writing the columns I tried to channel a bit of Carrie’s je ne sais quoi (and I really can’t say quoi), and I think that flavored the story as a whole. My next book has a high concept line, too, but it’s much more personal, so it might not fly with anyone but me.