Does anyone want to discuss Roger Michell’s film PERSUASION? (It was released as a television film in the U.K., and as a theatrical release in the U.S. — which may make it unique!) I call it “Roger Michell’s PERSUASION” because he was the director — but of course screenwriter Nick Dear deserves as much credit as Michell for this understated, heartfelt adaptation.

I think Ciaran Hinds is very real as Wentworth — and a swoony romantic hero at the same time. Amanda Root is so true and so subtle as Anne that I don’t think I could ever picture anyone else in the part. 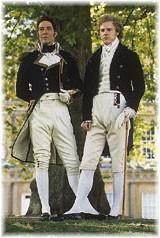 The silences in the film are amazingly powerful. This is an incredibly internal film.

The supporting performances are also great. I particularly adore Simon Russell Beale as Anne’s cheerful (but perhaps not too bright) brother-in-law Charles Musgrove, and Fiona Shaw as Mrs. Croft, the Admiral’s resourceful wife. (I once saw Simon Russell Beale portray Guildenstern in Stoppard’s ROSENCRANTZ AND GUILDENSTERN ARE DEAD, and Fiona Shaw play King Richard II in Shakespeare’s play, but I assure you I am quite unbiased!)

So, which were your favorite parts of the film? Or what didn’t work for you?

This is my favorite Austen adaptation. I like every part of it: Anne’s growing confidence, Captain Wentworth’s growing agony, her father’s horribleness, her sister’s solipsism. I loved every part of it. I took myself to see it a long time ago, and it remains a great memory, too (I love seeing movies by myself, a rarity these days). It made me love the book even more, which is hard to accomplish when you’re as book-centric as I am.

It’s my favorite, too. I loved the music in it–I think I’ve mentioned this before. One scene that was very effective was right near the end when Ann waits for Wentworth and walks around the room where almost all the other characters are playing cards –all beautifully lit by candlelight, and the music is a piano transcription from a chorus from Die Fledermaus–totally out of period, but so very poignant. Great scene of forgiveness and farewell.
Loved the slightly grubby look of everyone, clothes that had been well worn. And I didn’t realize that was Fiona Shaw!
I also loved the kiss behind the circus parade and the slow walk away from the camera down the Bath street.
Thought the Bounty scene was silly and superfluous after that but I forgive the director b/c the rest of it was so darn good.
Janet

I think the one serious weakness in the film is the over-the-top portrayals of Anne’s father and sister Elizabeth. Elizabeth in particular is loud, vulgar, and incredibly stupid. I can see that Michell probably felt that 107 minutes wasn’t enough to tell the whole story if he had to be subtle about the Elliot pride — but I definitely cringe every time Elizabeth screams “She is a Viscountess!” 🙂

My favorite Austen movie ever! And a beautiful piece of film-making. PERSUASION is such an introspective novel, it seems almost impossible to translate to film, but it was done so very well. It impressed me how well-placed silence could convey more meaning than words.

I think that, too often, even in film adaptations that I mostly like, the writers and directors feel the need to “spell things out” for the audience just in case they don’t get it. One example I remember is in the film version of THE REMAINS OF THE DAY by Kazuo Ishiguro. It’s a lovely, subtle novel about loyalty, both earned and misplaced; and in one of the key scenes, the screenwriter made Anthony Hopkins explain his motivations out loud–a blatant violation of the character, who is not at all given to such self-analysis. I liked the movie, but I find the lack of faith in the audience hard to forgive. That is a sin that the film version of PERSUASION mostly avoided.

I have always thought PERSUASION (the novel) had a lot of passion, albeit subtle. People have disagreed with me (JA was a lady, after all! gasp) but this film proves that there are others who think the same!

It’s been a while since I’ve seen it, but I remember being really impressed. It captured the book for me perfectly, unlike certain a certain version of Emma made in the mid-90s. And yes, Ciaran was very swoony 🙂

This is also my favorite Jane Austen adaptation. In fact, I’ve seen it several times, and after reading your entry, I may just have to break down and buy it! It made me want to read the book,and now it’s also my favorite Austen after Emma. There’s an autumnal feel to the movie that’s just lovely.

Persuasion’s my favorite JA and this is a terrific movie (not my favorite, because I maintain my snarky preference for the Beckinsale Emma). I love the Musgraves (musgroves?) particularly and Ciaran Hinds thru most of it (especially in the Musgrave scenes). But every time I see Hinds in the scene where he proposes — so upright and redfaced and high collared — well, I can’t help it, he looks like a big penis to me.

(if anybody is still reading) I also adored Fiona Shaw — a total delight to hear her articulate the words “reasonable creatures.” But then, I always love Fiona Shaw. Saw her in Broadway as a breathtaking Medea. And does anybody know The Triumph of Love — a fantastic movie adaptation of a Marivaux farce with Shaw, Ben Kingsley, an adorable Mira Sorvino as the heroine in pants, and some boring drippy guy as the male ingenue?

I have to jump on the bandwagon here and say it’s my favorite JA adaptation, too! It just seems to capture the “spirit” of the book so well, and it looks real. The houses look lived in, the clothes look worn, no one is “too” good-looking. And the casting is near perfect. I agree with Janet that the last little bit on the ship is not needed–the walk down the Bath street and the card party winds things up perfectly. I love it.

I’d also like to see someone make a Northanger Abbey adaptation, and a GOOD Mansfield Park!

I will go on record as saying I like the bit on the ship at the end! So there. 🙂

Elizabeth, I agree with you about the autumnal feel in the film PERSUASION. There is a sadness running throughout…and even when Anne starts smiling again, and looking younger, and everything starts going right, there is still a certain feeling behind it — of opportunities missed, of time moving inexorably and unmercifully onward…

BTW, Pam, you have a bizarre imagination! 🙂