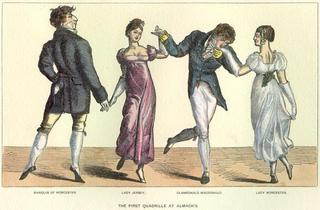 I know some people don’t see the connection when chick lit is compared to Jane Austen, but I can’t help seeing many parallels between her world and ours. Maybe one of the reasons her works are classics?

A few days ago, I watched a show involving the new concept of speed-dating. At least, I think it’s a fairly new thing, I’ve been out of the dating scene (is it still called a “scene”?) for over 17 years. Yikes! Anyway, for anyone else who is terminally behind the times (when I first got spam about Paris Hilton I thought there must have been a scandal at a Parisian hotel), speed dating apparently involves couples seated at rows of tables who get to talk for something like 8-10 minutes before moving on to another partner. By the end of the evening, anyone who enjoyed their brief time together can arrange for a longer date.

Is this a hip and clever new way of weeding out people one would hate to be stuck with for a full-length date? Perhaps. But is it so different from Regency balls and assemblies, ranging from the exclusive events at Almack’s to the public assemblies held at inns and such in towns and larger villages all over England?

Think about it. Singles at a Regency ball were expected to have a range of partners; no more than a couple of dances with just one. And given all the action and intricate movements, were they left with much more than 8-10 minutes to converse?

A fairly efficient way for a busy aristocrat (one of those who actually minds his estate and his duties to Parliament) to interview potential brides.

But I’m also sure it was a good way to identify the partners a lady would rather NOT take a carriage ride with the next day. The aging roué with sawdust padding out his calves (Regency equivalent of a lounge lizard). The lisping, mincing dandy. The bored rake who despises country dances? (Which I happen to think are good fun.) The bluff country squire with long stories of his hunting dogs, who steps on your delicately embroidered hem with his BOOTS since he couldn’t be bothered to change into regular shoes for a ball. Oops! I think that last one has appeared on more than one Regency cover, impersonating a Hero. I’d better stop while I’m ahead…

Great post, Elena! I think you’re dead on in your analysis–and instead of exchanging numbers, you pay a 15-minute visit the next day to express your interest. Of course, the woman can’t do anything in this case but wait for the man, but we’re in much more enlightened times, right? Right?!? Anyway, I love this post. And I’ve been out of the dating scene myself for 16 years, but I’ve heard of this speed-dating stuff too.

Very clever about the speed dating parallel, Elena! I supposed that cocktail parties are sort of the same thing. Not that I would know. I don’t think I’ve ever been to one. But I imagine one chats with lots of different people for a short time each . . .

Speaking of cocktail parties, I had this instructor my freshman year in college — he was really cute, BTW, and I had such a crush on him, but that’s neither here nor there — who would throw out interesting tidbits of information and say “here’s something you can share at the next cocktail party” and the concept sort of stuck with me. And then there was that whole slew of years when bridesmaid dresses were short, and we were always being told we could re-wear these (very expensive) dresses at cocktail parties…

Okay, who has these cocktail parties? And why don’t they invite me? Of course, I’m sure I would hate to go to one — meeting new people is NOT something I can do without a lot of stress — but I wonder about these parties. Do they even exist? Of course, the people I know don’t even drink hardly at all. Or smoke, for that matter. Instead, they have gaming parties. (Did I ever mention I’m a geek?)

Okay, sorry, back to the subject. Regency. My friends also do Regency dancing — isn’t that weird? But we never talk to the people we meet dancing. Kind of impossible. But I guess if it were really the Regency, there would be more time in between dances, and that’s when one would chat.

Of course, one can get up a communication nonverbally. Flirt, clown around, or sort of negotiate various dance things…

I presume this speed dating, on the other hand, is all about actual talk. A bit different, then. I mean, I’d guess these people don’t talk much about the weather…

Okay, sorry, I have no idea why I’m rambling on so about random things — I’ll blame it on the caffeine! Or, no, even better — I tried “milk tea” this morning. It was a powdered thing that came from Taiwan and it was weird. Maybe I’m under the influence of milk tea!!!

Cara, who had really better shut up already

When I did English country dancing a few years ago (one of those things I’d like to start doing again whenever), we danced one of the Playford dances (it’s one that’s used in both the A&E P&P and the G. Palthrow Emma) and someone said that if we were to do the whole dance–there were about 15 couples–it would take about 45 minutes. That’s everyone returning to their original position.
Btw, never, ever think English country dancing is just all good clean fun. It’s very flirtatious–you get to gaze into your partner’s (and other’s) eyes, hold hands, etc. It’s very much ritualized courtship and flirtation. It’s nothing like American contra dance which is the sort of missionary position of group dancing (in my opinion anyway).
Janet

I always hated the dating scene…I’d have been a miserable debutante. True, if I’d had the social standing to make it to one of those coming-out parties and make a spectacle of myself ;). I’d have been trained. I just can’t see at this moment how training could have helped me! I would have been staring at the chandelier, the paneling, the orchestra on the balcony, or a bug on the drapes and doing anything to keep from drawing attention to myself. Yes, I would have made a lousy heroine.

I understand that at one’s presentation at Almack’s, the deb’s partners would have been chosen for the evening by the presiding patroness…that would eliminate the sitting and waiting…but I’m not sure how that might have worked or if there was any flexibility in the rule.

Correct me–please–if you think I’m wrong. I only found that little tidbit in one place.

Speed dating…um…about as romantic as “elimidate.” See, I can’t be made happy!!

Cara…when I was in college, cocktail parties weren’t in vogue. You could meet someone at an anti-war demonstration, though! ::Sigh:: I never had a chance to learn ballroom dancing! The next time I go to a Beau Monde Conference, I HAVE TO LEARN TO DANCE! I’d much rather watch, so don’t let me get away with it!

Well, Laurie, next time we’re both at the Beau Monde soiree, I’ll remember to grab you and make you dance!!! 🙂 Though actually, if one watches attentively, one learns just as much as if one dances, I think.

BTW, you’d make a great heroine! There’ve always been lots of Regency heroines who aren’t as polished as their families wished… 🙂

Janet, I think the dance you’re referring to is called Mr. Beveridge’s Maggot — fun dance! I’ve danced both the original version, and the adaptation they used in P&P — both good.

Maybe no one ever actually went to cocktail parties. Perhaps they are one of those urban legends that everyone believes in without evidence, like the vanishing hitchhiker, or street parking in downtown Manhattan.

I think there was a speed-dating scene in the recent movie “Hitch.” Which, as I pointed out to my wife at the time (very persuasively and at great length), is essentially a romance movie for men–i.e., doofus men get really hot and successful women because the women recognize the innate goodness of their characters. Or something like that.

Or maybe my wife pointed it out to me. I forget these little details.

Based on the Regency dances I’ve attended, I think one would have more time for flirtation if one didn’t have to constantly watch out for the people who only just learned the dance and are struggling to remember the steps–if one hasn’t just learned the dance and is struggling to remember the steps one’s self. I think an experience where everyone knew the dances very well would be rather different.

Great post! And so right–I have never tried speed dating (which sounds ghastly, even more so than most other modern dating methods) but I can see the parallels to an Austen assembly room scene. Where would Internet dating fit in?) (And Laurie, I think you would make an excellent heroine! How many heroines in Regencies–or any books–actually LIKE socializing at stuffy Society routs?)

I’d like to practive Regency dancing more, as well! Not that there’s much opportunity around here. But I’d like to NOT knock my partners down at Beau Monde soirees. 🙂