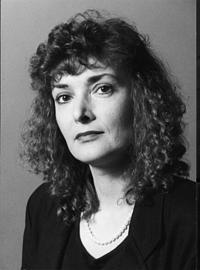 As a child growing up on a dairy farm, Laurie Bishop spent countless hours reading anything she could find—from Greek, Roman, and Norse myths to Robert Frost’s poetry. Then she picked up her grandmother’s copy of Jane Austen’s Pride and Prejudice, which began her love affair with the Regency period. Laurie won the Romance Writers of America’s Golden Heart competition for The Best Laid Plans. Today Laurie lives in her native upstate New York. She has a master’s degree in human services and counseling and is employed in social work, but her favorite job is collaborating at night with her four cats and writing partners–Kato, Pooka, Slipper and Kramer. Learn more at www.lauriebishop.com/. 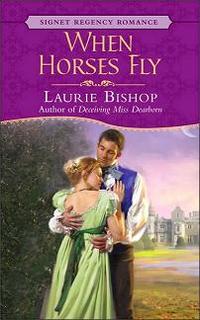 Praise for WHEN HORSES FLY!

“Bishop builds the story nicely as Alex’s heart of ice begins to melt and Cora learns what the pangs of love mean. With an unruly cast, tension throughout and some surprising twists, this novel is a perfect fit for Regency lovers.” — Romantic Times Bookclub 4 Stars

This book originated with a scene that popped into my head pretty much of whole cloth–the heroine disembarking from a public coach in a strange place, clearly alone and poor, and encountering the hero very abruptly–by falling on him!Her attention is quickly drawn from this embarrassment to the realization that the coach is leaving with all that she possesses in the world on board. The heroine is on her way to her new position, caring for an aged cousin. The gentleman is the cousin’s son, who is not in favor of her intrusion.

The short answer is that I began with both a character and a scene.

Q. How long did it take? Was this an easy or difficult book to write?

I believe it took me approximately six months to finish. I wish I’d had more time, actually–I do need to create a good deal of the story as I write, even though I start from an outline, and I did have a struggle in the middle of the book to break through a block. That’s a lesson–you never know exactly how much time you need. I’m happy with the end result, however!

Q. Tell me more about your characters. What or who inspired them?

Cora was inspired, in retrospect, by Jane Eyre–a post-Regency character, but I could apply her situation to Cora easily enough. Cora is not as outwardly meek as Jane and is more proactive, but Jane Eyre was the seed.

As for Alexander–I didn’t create him after anyone that I can think of, but he has some of the moodiness of Heathcliff in WUTHERING HEIGHTS, although he is much better behaved! He suffers from paternal rejection and from living in the shadow of a favored (and deceased) brother, so that would produce some of Heathcliff’s angst. Anyway, I do have to keep some secrets about Alex for now…

Q. Did you run across anything new and unusual while researching this book?

I enjoyed researching the history of the area, the southeast coast of England–specifically, the vicinity of Beachy Head, Birling Gap, and East Dean. All of these places are real, and there is a very interesting history of smuggling associated with East Dean and Birling Gap. I took an author’s license to create Lord Wintercroft’s “castle” and the specific caves mentioned in the story, but the setting is authentic. I’d love to see East Dean someday–I understand that it is relatively unchanged, and still has its pub, the Tiger.

Q. What do you think is the greatest creative risk you’ve taken in this book? How do you feel about it?

My reverend is a flawed character. I can’t elaborate without revealing too much of the plot, I’m afraid. I’m very satisfied with how this worked–both in terms of realistic character development and in the turn of the story.

Q. How do you feel this book compares with your previous Regencies?

WHEN HORSES FLY is more like DECEIVING MISS DEARBORN than THE BEST LAID PLANS. It is more of a drama and isn’t meant as a comedy–although there are a few laughs in it (I hope!).

I’d love to write a comedy again, but that is something that starts with the characters and the premise. Some stories aren’t meant to be comedies. But I retain whatever makes up my voice–dialog, style, and etcetera–in my opinion, anyway! As much as possible I always strive for a period style–a rhythm and a structure that reflects the 19th century style–within certain limits. And…I have a lot of fun doing it.

Q. What are you working on now?

I am in a resting and well-filling phase at the moment, doing research, considering ideas. My next book will either be a historical or possibly a contemporary romantic suspense–so you can see I have a lot to mull over. As for writing, I am journaling and doing short sketches to solidify my ideas.

Whatever I decide upon, it will be a book of my heart. And I’ll be sure to let you know when I do!

Thanks so much for the interview! It’s been fun.

Ah! I thought I detected Gothic overtones in WHEN HORSES FLY! (I’m halfway through at the moment, and enjoying it very much!) I think I also see hints of Rochester in Alexander, by the way. 🙂

Laurie — as long as it’s your interview day, why don’t you share how it felt to win the Golden Heart? (For those of you who aren’t aware of it, winning the Golden Heart is pretty much every unpublished romance writer’s fantasy — and a beautiful way to start a career.)

Do you find your master’s degree in human services and counseling is comparable to writing about your characters? Have you ever featured a cat in your writing? I can’t wait to read your book now! Thanks for answering the questions, too.

First of all, winning the Golden Heart was something I totally didn’t expect. Any of us could have one that year–it was a very tight race with five great manuscripts in the finals. And when my name was called…

Well, I didn’t hear it. That was primarily because my friend Lisa was beside me SCREAMING SO LOUDLY that I missed it completely! I had to ask if it was me, and I will probably never live that down with my critique group!

The biggest surprise for me is that I am extremely stage-shy and actually pulled it off. I become paralyzed in front of a large group, but fortunately, the same Lisa who screamed had insisted that I compose an acceptance speech, which I felt was a rather assuming thing to do, but I did anyway to get rid of the total fear factor (what if I actually DID have to walk up there and say something???).

No, I’m not as bad as I used to be–I gave papers in graduate school even–but I’m far from at ease on stage. But I did okay, and really surprised myself.

The next and most wonderful thing was calling my sister at some outrageous hour in the morning and hearing her scream. This is a woman who never screams. Us Lance women tend to conceal our emotions. 🙂

I love that little gold charm. It represents a shining moment unlike any other for me, at a time I really needed one.

May we all have one of these now and then!

Megan–do you mean is my degree useful in writing? Well, yes, it is. It is very helpful in creating characters and their reactions and emotions. It’s a tool, just like many other things we have in our little stash, like having actually experienced the setting you are writing about. I so envy those who have traveled to England–I never have. To France, Italy, Spain and Greece, yes…but not to England!

I have never had a cat in a Regency…sadly. I wish I had done that already. But I will have cats in the future, you can bet on it!

As a PS…I did lose my wonderful little Tojo this spring. I nursed him for months with his renal failure and cancer, but he let me know that I had to let him go in early March this year. He’d made it to 18.

I do have (ahem) FOUR of the furry characters running around now–all rescues, except one that a friend begged me to take–but I miss my little Tojo. I like to picture him well and happy now, and not at all jealous of my new menagerie. After all, he knows he’s best!

Laurie, {{hugs}} on missing Tojo! I’ve only had one cat in my life, and he passed away over a year ago after being very ill for six months with heart disease… It was *very* hard for me to let him go in the end. I think it’s great that you have four now to keep you company!

As a cat person, I must say I’m a little afraid to put a cat in a book… I fear I would get so caught up in all the cat-stuff that I’d neglect the rest of the story. 🙂

Yes, Laurie, thanks for understanding my incoherence. Gah, more wiped out from the New Jersey conference than I thought!

Great interview, Laurie!
I’m just about a third of the way into WHEN HORSES FLY and enjoying it very much. Your own background shines through your very admirable heroine–can’t wait to see how she helps unravel the hero’s very dysfunctional family’s problems!

And I forgot to say — what a delightfully managing heroine, Laurie!!!! 🙂 She just wants to fix everybody up. A bit like a Regency Mary Poppins, but nice. 🙂