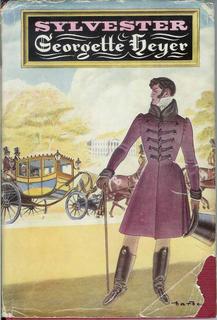 Here are some Regency covers I really like! They’re shown here in approximate order of publication.

This Georgette Heyer cover is done by the famous cover artist Barbosa, for the 1957 SYLVESTER: OR, THE WICKED UNCLE released by Heinemann. I love the coach in the background, and the way Sylvester dominates the picture. He’s standing in shadow, too, to make him seem just a little bit mysterious…or wicked. Our Sylvester has no false modesty; he says “there are not five but a dozen young women of rank and fashion who are perfectly ready to receive an offer from me.” Hmmm…definitely needs to be taught a lesson! 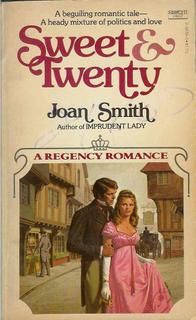 Joan Smith’s SWEET AND TWENTY (Fawcett, 1979) has a charming cover. I love the shops in the background, and the pretty young thing center stage. What I find really intriguing is that this pretty young thing is not the heroine, but her empty-headed cousin! In chapter one, this creature exclaims, “Cousin, have you read a book too?” in wonderment. Ah, silly young ladies. Gotta love them. 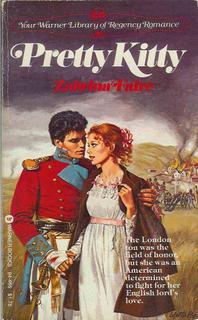 In 1981, Warner brought us PRETTY KITTY by Zabrina Faire. (Yes, it was a pen name!) I love the heroine’s big eyes and curly hair, and the action-packed background (a city in flame, with cannon firing at it? You don’t see that on every Regency cover!) The hero a bloody bandage, too–and a lovely sword. Ah, those military heroes… He inadvertantly compromises the heroine, and then becomes engaged to her, without ever knowing her name! 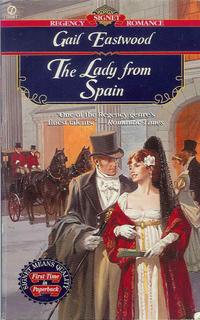 I was never the biggest fan of Signet’s older covers, the ones that tended to shades of brown and olive–they always looked rather dreary to me. But some of them were lovely, such as this 1997 cover for Gail Eastwood’s THE LADY FROM SPAIN. I think the colors go wonderfully together, and the entire composition is just pleasing to the eye. The carriage and horses in the background is a plus! The hero is dapper, and the heroine’s costume hints at interesting things. Indeed, on the first page we learn of her: For now it suited her purposes to be taken for a foreigner… Definitely intriguing! 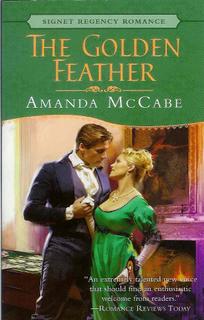 Here’s a lovely cover for Amanda McCabe’s 2002 THE GOLDEN FEATHER. What makes this cover stand out for me is the lighting — the whole feeling here, the mood, the mystery is created by the way the artist handles the light. The gaming table in the background promises interesting historical detail, and heroine’s mask hints at an intriguing character! And at least part of the picture is accurate; when the hero sees the heroine, he notices: Mrs. Archer was very striking. And she did indeed have a magnificent bosom, its whiteness set off by the low bodice of her green satin gown. 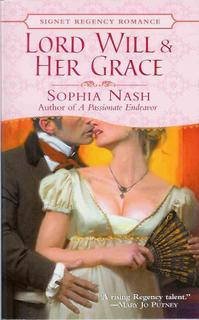 Here’s one for Amanda, who loves headless characters! Well, these are half headless, anyway. A lovely and unusual Signet cover, from April of this year, for Sophia Nash’s LORD WILL & HER GRACE. So…is the heroine kissing him? Turning away as he tries to kiss her? Ah, the questions this covers creates! The pose looks simple at first glance, but another look shows the tense way she holds her fan, and the way her body is turned quite away from him…definitely makes one want to find out more! 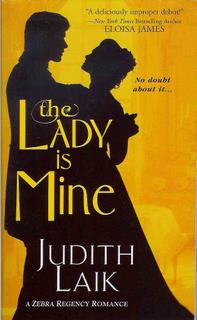 Here’s one of Zebra’s gorgeous covers from earlier this year — May, to be precise — for Judith Laik’s THE LADY IS MINE. I love the silhouette (and her later book had a similar silhouette, but with purple in the background). It’s elegant and lovely, and very very Regency. Even better, if you look closely, you can see all sorts of things in the yellow background! Definitely one of my favorite covers. It doesn’t reveal much about the story, but a cover like this doesn’t need to…even for a hero who talks about potential brides thus: “After all, one can’t spend all one’s time in bed. Over the years one will occasionally have to chat with the woman.” Hmm…perhaps another man who needs to be taught a lesson! đź™‚ 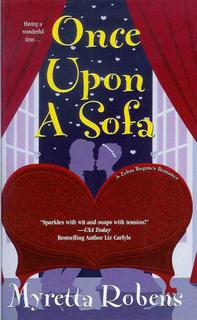 I positively adore this cartoon cover for Myretta Robens’ ONCE UPON A SOFA, which was another May 2005 release from Zebra. It’s funny, it’s catchy, it’s bright and colorful, and it’s very very new. The colors, the composition — everything is perfect!

So — which of these covers do you like best? Why? What sort of covers do you like in general? (Amanda doesn’t have to answer — we know she likes headless people best! BTW, Amanda, are you a fan of Washington Irving, by any chance???) đź™‚

This entry was posted in Reading, Regency and tagged Book covers. Bookmark the permalink.