New Jersey And Me: Perfect Together!*

Last weekend, half of the Risky Regencies crew–Elena Greene, Janet Mullany, and I–attended the New Jersey Romance Writers’ Conference. Janet was unfortunately suffering from a cold, so her trademarked (and if it’s not, it should be) spunk was muted by sniffles. She still managed a few zingers, though. That Janet’s a trooper!

Friday night, the three of us ate dinner with several more Regency authors. In case you think all Regency authors are staid little misses wearing Empire waists and fussing about their dance cards (“do I have one or don’t I? I can’t finish this book unless I know for sure!”), I’ve included photos of Elena and me actually drinking! Oh, we sure know how to party, right? 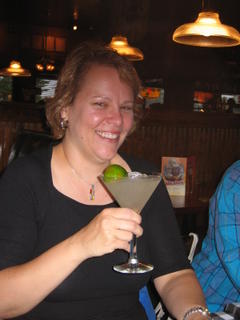 Elena’s drink was a mammoth marguerita, while mine was a beer. If I were a Regency character, I think that drink choice would demand I be the maid-of-all-work, scrubbing the stairs in the early hours when the heroine returned from another fabulous night on the town. Good thing I’m writing in the world, not living in it. I am a horrible stair-scrubber. A darn good drinker, though, if I might be so bold.

The next day, the Conference was open to the public for a booksigning. Elena and I were seated directly across from each other, and I saw a lot of folks coming up to her table. I sold some books, too, and not all of them to people I know! That was pretty cool. I snapped pix of Elena and Janet, and someone got me, too. 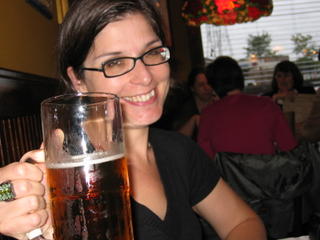 This was my first booksigning, and I had a blast. It was great to meet people who like to read the kind of book I wrote, it was awesome to sign my name and think it actually meant something more than an ‘oh, I’m paying the bills’ signature. Elena and Janet actually decorated their spots on the long tables, and they looked lovely; me, I brought a pen. 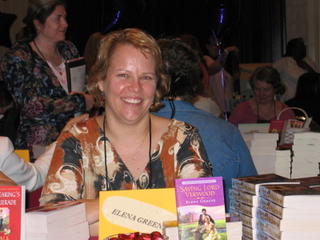 The main point of the Conference, however, was the workshops. I attended quite a few, from the purpose of blogging (not, I was amazed to discover, just to tell a bunch of Virtual strangers all about my private life!), to the importance of getting the history right to increasing the sexuality of our books. 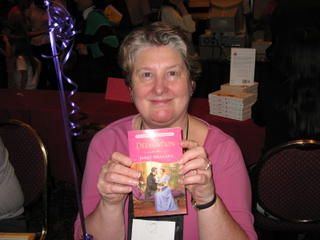 The most useful panel for me, however, was Eloisa James’ panel on Ten Things She Wished She’d Known When Starting Out in theBusiness. Eloisa James is a super-smart author, and she makes a compelling point about keeping the business of writing a business. For example, don’t share too much information with your fellow writers; share, yes, of course, make friends and further acquaintances, but don’t behave as if you’re in high school. Or maybe you should–you never know when your best friend today will be your enemy tomorrow, but instead of stealing your boyfriend, she’ll try to steal your editor. Eloisa also talked about the good parts of being an author, which includes that same camaraderie (for her demonstration, visit the Squawk Radio site. But you probably already have). 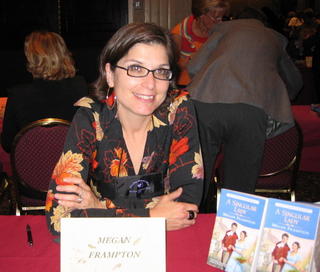 That’s one of the best things about becoming part of the Risky Regency crew: we’re getting to know each other as our visitors do, too. I’m envious of Cara’s book collection and her sprightly snark (I think mine is much more dour), Laurie’s evocative mood-altering posts, Janet’s fabulous wit, Amanda’s sassy, saucy assuredness, and Elena’s graciously lovely humor and good sense (not to mention she’s so good at the tech stuff).

After the weekend was over, I got myself and my vast collection of black clothing onto New Jersey Transit and made the trek back to Brooklyn. I went home feeling like more of a writer, like someone who was part of a community and, what was the best, as if I had learned from my peers.

Thanks for sharing in our community,

*Okay, so if you’ve never seen the “Come Vacation In New Jersey” ads from a few years ago, this doesn’t make sense. If you have, trust me, this is hysterical.

Megan, in the photo where you’re signing your book — what’s wrong with your shirt? Did they make you wear that? Or is that your version of “when in Rome…”?

And as for this “don’t behave as if you’re in high school” thing….what’s up with that? You mean I have to stop thinking Timothy Hutton and Kevin Bacon are cute, and eating at Taco Bell for lunch every day? (By the way, changing the subject here, am I the only person who thinks there was once a Taco Bell in Leicester Square?)

I soooooo wanted to go to the conference, and while I’m seconds away from Iselin, the nightish time was a bad time. 🙁 So, any chance of living through anyone who went, is very cool! 🙂

Oh, I wish I had been there! It’s been months since I was at a conference, and I need a “writer friends” fix (my non-writer friends here just don’t understand the angst that can go on when I haven’t heard from the agent in a while and my characters are being stubborn! For some reason they lose patience with me…). And I could definitely use one of those margaritas. Looks even better than the ones in Reno. 🙂

After rooming with Elena and Cara at RWA, I have to agree that Cara has snark (in the best, funniest way!), and Elena has vast good sense. I’m glad someone thinks I have assurance, since 99% of the time I feel like a complete doofus. RR forever! 🙂

But waddya mean we can’t act like we’re in high school any more??? No more passing notes? Ditching pep rallies? Watching Twin Peaks when I’m supposed to be doing algebra?

My shirt, Ms. Cara, is black with a nutty autumnal theme to it. I was debating between it and the Loudest Shirt Ever (have I mentioned I am a magpie?), but decided discretion, valor, blah, blah, blah.

Everything else was black. And Elena was sporting a fair amount of black, too.

Lois–next year you should give it a try. I’ve started thinking about a workshop I might submit, too.

Megan,
Thanks for posting those pictures! It was a great conference, the only thing that would have made it better is to have the other three Risky Regencies there, too! Other highlights: getting the chance to chat with Gail Eastwood, an extremely talented author who was very encouraging to me when I was getting started, and a chat with Mary Jo Putney–also immensely gracious and supportive.

But as for me having “vast good sense”, my husband is laughing his head off at the thought. Actually, though, I think I do give good advice; maybe it helps me to remember to take it myself as I’m grappling with a stubborn first draft.

Yesterday I had a meeting with my CPs, who reminded me that if I don’t trust my characters, why should my characters trust me?

More very good advice, even though it makes my husband roll his eyes at our writerly weirdness.