No, I haven’t lost my mind. I started pondering cats in the Regency when Mega 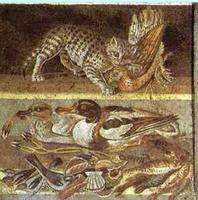 n asked if I had ever put a cat in a Regency romance. I haven’t, and I had to ask myself why. I love cats. I love all animals for that matter, but I adore cats. I realized that I am uncertain how cats were seen in the Regency period. I do know cats were kept as functional animals–as mouse and rat-catchers–in kitchens, in warehouses, and on ships. But were they commonly considered pets?

I have not encountered any contemporaneous writing mentioning cats in particular, and welcome hearing from anyone who has. There is some pictorial evidence, but little that I could find was specific to the Regency period. We can start with ancient Egypt, where it is commonly known that cats were admired and worshipped. We know that cats existed in ancient Rome, as evidenced by the fresco from 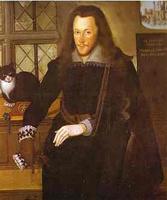 We know that cats were kept as house pets in earlier periods in England as well. Here are two portraits, one of third Earl of Southampton with his cat Trixie in the Tower of London, c.1601-1603, and a portrait of the Graham Children by William Hogarth that depicts
the family cat in the background.

The third Earl of Southampton kept his cat with him throughout his imprisonment and commissioned John de Critz the Elder to paint the portrait of himself and his cat prior to his release. This certainly is evidence of cat love! 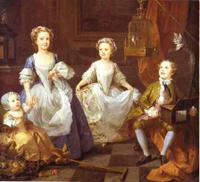 The portrait of the Graham children simply shows the cat’s presence in the household–hungrily eyeing the caged bird with a very predatory expression on his face.

(See the detail showing the cat and his prey).

So now I arrive at the Regency period. I found a portrait of a kitten by George Stubbs which must have been commissioned by a very adoring owner (a Miss Anne White): 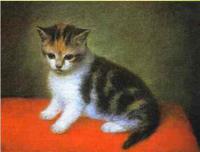 Unfortunately, I did not find any other formal portraits containing cats in the Regency period, and I welcome information and links from anyone who knows more than I. But I did find two satirical prints that rather say it all! 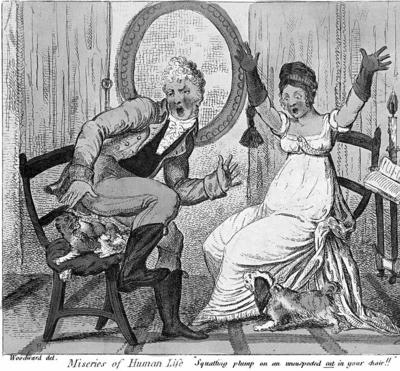 Actually, I suppose what I have learned is that there were “Catwomen” in the Regency! I think I have just discovered where I would have fit in if I had lived in that time…except I probably would have been a milkmaid with a furry following rather than a gracious lady as is depicted above. ::Sigh:: That would be my fantasy…having a servant to clean the litter pan!

So, does anyone else have any primary or secondary information on cats in the Regency? Did they even HAVE litter pans? Enquiring minds want to know!

Oh, I love you delving into feline history! I have no cat information–I love them, but am horribly allergic–but I think it’d be fun to have one in one of our books. You see a lot of dogs in Regencies, which I also like.

Megan–the nice thing about a cat in a book is that it can’t make you sneeze!

Hmm… no Regency cats occur to me, though I think your Regency cat lady says it all, Laurie!

And I agree about that Stubbs cat painting…it is clearly both very observant, and very loving! So I would guess either Stubbs loved cats, or the person who commissioned the painting did (or both!)

By the way, I love those pictures! From the cat eyeing the bird, to the cartoons!

Apparently, there was an 1803 posthumous collection of William Cowper’s poetry which included the poem “The Retired Cat.” It begins:

“A poet’s cat, sedate and grave
As poet well could wish to have,
Was much addicted to inquire
For nooks to which she might retire,
And where, secure as mouse in chink,
She might repose, or sit and think.”

If anyone’s interested, you can find the complete text at the University of Toronto site, here:

The scholarly note at the bottom of the page says that Cowper wrote a letter in 1787 describing a kitten he had, and lamenting that it would one day become a cat. 🙂

If anyone wants the poem on the U of Toronto website, the complete URL follows, except that it should all be one line:

Great post, Laurie! I also love cats (have 2 of them, in addition to 2 dogs–one of the dogs, a 4 pound poodle, likes to bully the cats, but they’re not much into that), and now you have me curious about cats-as-pets in the Regency. I wish I knew more about it. (They seem to appear a lot more in mysteries than romances, except, of course, for those multitudes of Zebra kitten anthologies!)

As for litter boxes–maybe they used boxes of dirt or sand??? Would a cat like that? My 2 get angry whenever I deviate from their favorite brand. 🙂

I’m mildly allergic to animal hair–not so much as to be bothered when visiting a reasonably clean home that has them, but not enough to live with them year-round. So my own menagerie is limited to fish, though I’d love to own a horse someday.

I do love animals in stories and it’s a way to have any sort of pet you want.

Re the Regency, I wouldn’t blink at the mention of a cat as a pet. After all, the Duchess of York kept not only dogs and parrots, but also monkeys, ostriches and kangaroos.

Well, there’s the Zebra cat anthologies. But other than that, I don’t see cats very much.

I found two wonderful 18c poems about cats, one by Christopher Smart, who was confined to a madhouse for excessive public praying in the mid 18c:
Jubilate Agno
For I will consider my Cat Jeoffry.
For he is the servant of the Living God duly and daily serving him.
For at the first glance of the glory of God in the East he worships in his
way.
For this is done by wreathing his body seven times round with elegant
quickness…
http://www.cs.rice.edu/~ssiyer/
minstrels/poems/661.html

And Thomas Gray’s Elegy on a Favorite Cat Drowned in a Tub of Gold Fishes
‘Twas on a lofty vase’s side,
Where China’s gayest art had dyed
The azure flowers that blow,
Demurest of the tabby kind,
The pensive Selima, reclined,
Gazed on the lake below.

Her conscious tail her joy declared;
The fair round face, the snowy beard,
The velvet of her paws,
Her coat, that with the tortoise vies,
Her ears of jet, and emerald eyes,
She saw; and purred applause…
http://www.poetryconnection.net/
poets/Thomas_Gray/7220

And another comment–cats were frequently badly treated in this era, so it’s nice to see some instances of affection if not downright pampering.

People probably still associated cats with witches and evil, as well as examples of uncontrolled (female, of course) lust.

Thanks for putting up these lovely pics. Stubbs’ kitten is adorable.

I forgot to mention the Zebra Kittens books…there are at least 10 in Amazon that I counted.

There is a reference to cats in Georgette Heyer’s VENETIA. I had included that (along with the Zebra reference) the first time I wrote my blog and forgot to add it back in. Venetia is in the barn loft, where the hero finds her in time to take the basket of kittens from her before she climbs down the ladder. Here it is:

…”For that ladder is not at all steady, and I had as lief as not climb down it carrying the kittens,” she explained.
“Is that what you have in that basket?” he asked. “How the deuce did they get up there?”
“Oh, they were born here! It’s the kitchen-cat: she always comes here to have her kittens. But I’m afraid something must have happened this time, and the poor little things are starving. That I cannot bear, though if they can’t lap yet I suppose they will have to be drowned.”

That passage bothered me enough that I remembered it was there, and I last read VENETIA many years ago. Of course Georgette Heyer was not a contemporaneous writer of Regencies, but I always respected her knowledge, since her first love was history. Still, the passage may better reflect the 1950’s than an attitude of the Regency.

I’ve read some unpleasant historical references to the treatment of cats, one in particular to betting drunks. 🙁 No animal protection in those days.