A bit about Megan:

Megan Frampton’s love affair with books began when her gormless parents (not an ounce of gorm between them. And let’s not even mention feck) moved her to a remote town in New Hampshire where there was only one television station.

And then the TV broke.

She devoured every book of fiction in her well-read parents’ library, finding special joy in Barbara Cartland, Georgette Heyer, C.S. Lewis, Anya Seton and the fairy tales collected and translated by Andrew Lang.

Megan majored in English literature at Barnard College, and worked in the music industry for 15 years. Megan married one of her former interns and lives in Brooklyn, NY, with him and her son. Now that she stays at home, Megan has returned to reading â€“ and writing â€“ the fiction that was her first love.

Learn more at http://www.meganframpton.com/, or read her Authors’ Journals at All About Romance here. 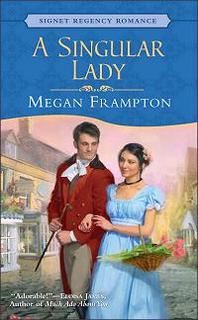 Praise for A SINGULAR LADY!

â€śThis book will touch readers who enjoy a sentimental love story with a nice touch of sensuality. The powerful, sexy hero knows exactly what he wants, and the spunky heroine is proud of being quite the bluestocking. This book is topped off with a dry wit that consistently finds its target.â€ť — Romantic Times Bookclub
4 Stars

Like everything I write, it started out with a character–Titania, my heroine. Instead of wanting to marry for love, like most heroines, what would it be like, I wondered, if she had to marry for money? And what if the guy she falls in love with has absolutely no money . . . or so she thinks.

Q. How long did it take? Was this an easy or difficult book to write?

It took three years, although the last year was probably the most productive. By then I had learned a lot about writing, and was able to implement my new-found knowledge in my head-hopping, unbelievable manuscript. It was the first book I ever wrote, so I’m not sure if it was easier or harder to do than any others.

Q. Tell me more about your characters. What or who inspired them?

Um, me. Only my heroine is younger, prettier, smarter, and more self-assured. My hero was sort of supposed to be an anti-hero–he’s not a dandy, he’s just as happy reading as dancing, and he’s very to the point. Of course, he does look like Hugh Jackman (in my mind), but with even broader shoulders. So I guess that is kind of heroic.

Q. Did you run across anything new and unusual while researching this book?

I found that your entrance fee to the London Menagerie would be waived if you brought a dead chicken or something else for the carnivorous animals to eat. I cut that part, though.

Q. What do you think is the greatest creative risk you’ve taken in this book? How do you feel about it?

I think the greatest creative risk I took was tweaking the cliches behind Regency historicals: my heroine is sharp-tongued, insecure, realistic in her views of marriage, she’s got a broken nose and is terrible on a horse. My hero wears old clothes, has a temper, and thinks about pregnancy when fooling around with the heroine. Neither of them would have been given admittance to Almack’s, so I gave them an alternative place to be on their Wednesday nights, and I twisted another few things around that I hope are unexpected and funny.

Q. Is there anything you wanted to include in the book that you (or your CPs or editor) felt was too controversial and left out?

When my editor bought the book, she bought it as a traditional Regency, which meant I had to cut 20,000 words. Unfortunately, as a traditional Regency, that meant I had to cut a lot of the sex scenes. She and I were both bummed about that, but it wasn’t necessarily controversial, just limited by space constraints. I think it’s still racier than average, although nothing close to Janet’s.

Q. What inspired your heroine’s column?

I’ve found I love the interstitial writing–chapter headings, fragments of letters, random poetry, etc.–and in my writing have found it really augments the story itself. My dad is a journalist, so of course had quibbles with my heroine’s columns, but he provided the details behind her visits to the newspaper offices. In a way, I guess, those columns are my homage to my dad, who wrote columns for the Boston Globe for a long time.

Q. How do you pronounce your name?

Okay, I have to confess–I added that question. See, my parents named me back when the name “Megan” was unusual. It’s pronounced with a long e, like “Meeee-gan,” although most people who spell their name that way use a short e. The parents were thinking about naming me Regan, but my dad’s favorite play is “King Lear,” and she’s one of the bad daughters. Thank goodness they completely avoided Goneril. So they flipped the first letter around to match my maiden name–McLaughlin–but kept the long e pronunciation. Way more than you wanted to know, but it’s been a personal bugbear my whole life. I’m getting over it now, can’t you tell?!?

Q. What are you working on now?

I’ve just finished writing a contemporary mommy-lit. It’s first person, and is basically my story if my husband left me. It ends up okay, though. I’ve got a half-finished historical written, a spin-0ff of A Singular Lady whose hero is Julian, the bastard son of the woman who hosts the Wednesday night literary salon. We’ll see if I ever get to finish it.

Thanks for the interview, this was fun!

13 Responses to Interview with Megan Frampton, Author of A SINGULAR LADY!