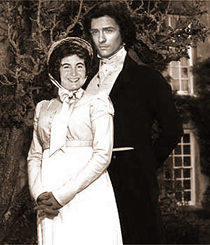 Almost every Wednesday evening, I get together with a group of friends for a LOST watch party. And yes, it’s mostly an excuse to drink wine and ogle the actors when they’re all sweaty in the jungle, but after the Chardonnay there are sometimes attempts at deciphering character development/overlapping themes/whatever. One of my friends suggested that which guy on LOST a woman likes can tell a lot about her. (I happen to like Sawyer–not sure I want to know what that says about me!!!)

Anyway, that, along with Cara’s post on Austen movie heroes, got me thinking about heroes in romance novels. They are, of course, one of the most important components of any story. As an author, you want your readers to fall in love with the heroes you write about; as a reader, you want to do the falling in love. But every woman who reads a romance (just as every woman who watches LOST!) is different. I happen to like a “dark” hero, though I have found there is often a fine line between “dark” and “whiny”. Dark–yummy. Whiny–not so good.

Someone asked me once how I keep from falling in love with the heroes I write. I have to say, 1) they’re not real, duh. They live in my head. And I know that. Most of the time. And 2) I don’t really write my “fantasy perfect man”, though they usually do have aspects that I admire in real life (intelligence, humor, ripped abs, whatever). I write the hero that is perfect for that particular heroine. I want to believe, once I finish writing a manuscript or reading a book by a favorite author, that these two people were made for each other and will be able to weather life’s storms together forever.

So, I took a look at my keeper shelf and came up with this list of some favorite romance heroes (mostly Regency-set, but I let a couple others sneak in):

So, now it’s your turn! Who are some favorite heroes, and why? What aspects of a hero’s character do you like to see in novels (besides great hair and a cute behind!)? And who is your favorite on LOST? đź™‚

(BTW, the pic was a gift from a Photoshop-gifted friend who helps me indulge my Orlando Bloom obsession once in a while. Do you think I make a good Lizzie????)

17 Responses to Heroes we love (or don’t)