Speaking of Trafalgar, I can’t believe it has been 200 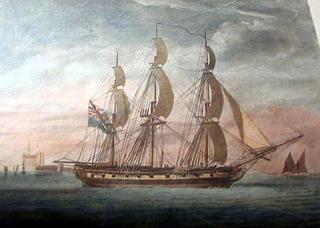 years. I haven’t really been thinking of the Regency as being so long ago–no idea why. But time does slip away. I’ve noticed more and more that events I lived through are being seen as old history by my younger friends. I am old enough to critique costumes and attitudes of the sixties if anyone wants to reenact the time. I even have a clue about the 5o’s, although from a very short perspective. 😉

I still have this thing about artificially faded jeans. They bug me. Worn jeans should be truly worn. I had pairs that were worn tissue thin in the knees, and when they ripped, I patched them. And wear patterns were very distinctive. Wear occurred in the knees primarily, to a lesser extent in the derriere. Men wore the imprint of their wallets in their rear pockets. Pronounced wear did not occur on the thighs and some other odd areas where mechanically faded and worn jeans make them (keeping in mind that I grew up in northern New York, not ranching country). And…worn jeans did not take on that brownish tinge unless the owner didn’t wash them regularly! Whenever I see worn jeans in stores with that “tea stained” look, I automatically think they look as though the owner wasn’t clean.

You tie-dyed your own T-shirts. You wore the same pair of Hurache sandals until they were falling apart. The Peace Symbol meant something. No one was trying to be a fashion statement unless you were square, and then you dressed like Jackie Kennedy or Twiggy (women!) or if you were male, your hair was very short and you wore glasses with the black plastic rims.

The idea that rock groups would age was funny. Remember that bar scene in Star Wars with the gray-haired rock band? That was hilarious when the movie was new.

I don’t know why I am saying all this–I’m just trying, I think, to show how we look through a distorted lens when we look back. We can’t truly know how people of a time looked or acted or felt or spoke. We can only do as much research as we can and be careful of our sources, especially if the source is another historian’s work or a movie of the time. Diaries, on the other hand, are more helpful…and not enough people write on paper these days! I worry that all the electronic evidence will be lost, and generations from now people will be struggling to understand what this time was all about.

And by the way, back to the subject of Trafalgar, I thought I’d provide this link to Nelson’s Navy–Life in the 18th Century Royal Navy. Great Britain’s Channel 4 has some great history pages.
http://www.channel4.com/history/microsites/H/history/n-s/nelson.html

Be sure to check out the Georgian Underworld too, by the way…
http://www.channel4.com/history/microsites/G/georgian_underworld/index.html

Your post had me thinking quite a bit, Laurie! One aspect that hits me a lot when I think about how fashions and customs change is how vehemently some people decry what went before. And it reminds me of how my children will despise something they once loved, i.e. “Teletubbies are for babies!”

I think some of that contempt for the past is related to a need to move on. But it also steams me when people are too harsh about it. We too will be dust…

I prefer to look back at the past with humor but also some respect.

Re the jeans, I’m sorta with you on the fake finishes and distressing. I wonder if all the holes and burns are supposed to make the wearer look more interesting, like someone who rock-climbs, builds houses or fixes cool old cars. Or perhaps someone who brawls at dangerous night clubs or something (much less interesting to me)!

OTOH I have to admit I like the look and texture of some of the new denims. One can think of this like the faux finishes on furniture in the past, where fake wood graining or marbling becomes an art form of its own.

And I like the return of the flared bottoms. They really do help to balance out wide hips. I do not have the figure of one of those heroines who can impersonate a boy!

Interested to know what the real fashionistas in the group think (I’m just an aspiring fashionista).

I must confess I do not have a sense of fashion that I am aware of! That is to say, I have my own sense of it, but I don’t know anything about “high” fashion.

Styles of the past do come around again. Nothing wrong with that. My reaction to jean styles is my personal, eccentric thing–I’m speaking of a style that pretends to be something that was once a statement, not a style per se.

I also happen to think the women’s styles of the 30’s and 40’s are gorgeous! Not the 50’s, though, with Queen Elizabeth II and Lassie’s Mother. Too stodgy by half. As for shirtwaists, those were my mother’s clothes, until she graduated to blue jeans! You wouldn’t catch me in a 60’s suit and pillbox hat, either.

I loved bellbottoms when they came out. I pieced the legs of my jeans to make them flare. But the style was also for hipriding waists (as it is again) and that is hard on figures with tummies. I had a tummy that I worried about then, too, but let’s say it was a little less…tummyish!

Regarding Regency fashion, I’m a bit of a renegade by liking the styles of the later part of the Regency better. From about 1815 on I much prefer the gowns–a little more flattering on ladies who are more generously endowed on the bottom half!

Exactly, Elena. What went before was what was current then. That does not make it silly when something else is current. But I think all younger people go through this phase of “looking down” at the fashions/attitudes/ etc. of older generations. It’s part of growing up in our culture.

Laurie, you mention the men wearing glasses with black plastic rims back in the day…hm, that’s me now! Only my hair isn’t crewcut short–anymore. And I love Dior’s New Look, debuting (I think) just post WWII. Very feminine. My shape does not allow for Twiggy-style clothes, so I’m not as big a fan of those. My mom saved some Marimekko dresses from the ’60s for me, I trot them out when I’m feeling particularly . . festive.

I’m SO with you on the jeans thing. Plus the manufacturers fade them (bright colors make things look larger) RIGHT where most women do not need more emphasis. There’s a high school across the street from me. Yeesh.

As for the loss of paper, I think the internet (and blogs, like this one) will be the documents for people of the future to figure out what we were like. Depressing for people who grew up writing letters, but I think not so much for people my son’s age.

Just a quick free-association on the fashion thing–every generation that has ever been born has commented on how the next generation is going to the dogs. (I find myself doing this from time to time, particularly when I teach undergrads; I’m not sure which is more disturbing, the undergrads or the “When *I* was their age” thought.)

But presumably sometimes they really *are* going to the dogs. I mean, Rome fell, right?

And why dogs? Dogs are generally considered friendly, loyal, thrifty and brave. Cats, by contrast, are lazy and self-centered, only getting by on the fact that they are so darned cute. Maybe the next generation are going to the cats?!!

I have to chime in and say I also HATE the faux-faded jeans look. I also really hate the faux-dirty jeans look. And the low-rider look. And I see plenty of these, since my workplace is on a college campus. 🙂 But now I sound like my grandmother, sighing about how these young people just have no taste or class. She hated it when I was in high school and the horrid trend was for jeans so tight you had to have little zippers at the ankles to get them on.

I love the Regency fashions, though, and that might be a big part of why I enjoy the period so much (I’m terribly shallow). It’s just so–pretty. MUCH better than the Victorian horrors that came after. And I’m glad the Empire waist is having a trend moment right now, because I think it makes me look taller (though maybe I’m just kidding myself about that). I also like the Gypsy ruffles and ’50s cocktail dresses trends, but that doesn’t have much to do with the Regency.

I find the history of fashion to be fascinating, how trends evolve from what came before, how they respond to what’s going on in the world. Interesting stuff. 🙂