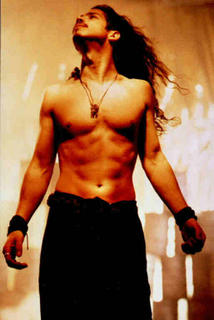 It’s Sunday, I’ve only had one cup of coffee, I’m sitting here in my jack-o-lantern jammies while my son eats cocoa pebbles. . . In other words, uninspired. So I thought I’d post one of my favorite things: Chris Cornell. He was the lead singer of Soundgarden, one of those ’90s grunge bands, had his own record, and is now the singer for Audioslave, which is the band Rage Against The Machine with a new singer (him). Way more than you wanted to know, but my gosh–look at that chest! And he usually performs shirtless! Do you blame him?

Megan,
How very shocking! Whatever will our new guest, Mr. St. James, think of us now? Do you not recall that during the Regency, a gentleman never removed his coat or waistcoat, let alone his shirt, in a lady’s presence? Except, of course, when the lady is his true love and he has taken her to a secluded grotto or folly in order to instruct her in the amorous arts of which he is a consummate master…

Oh, dear, now I have put myself to the blush! But perhaps a gentleman who laments the current lack of display of gentlemen’s fine limbs will forgive us our pleasure in viewing the upper portions of their anatomy?

I know. Very, very wrong. Although I did read that men removed their shirts to box, and a certain type of lady was allowed to view boxing matches–what if one of our heroines managed to sneak herself into the boxing venue and saw what was previously covered under mounds of white linen? Kinda brings up all sorts of interesting scenarios, no?