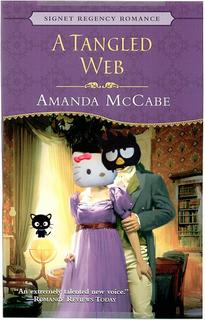 As you may have guessed from reading some of my previous posts, most of my favorite romances are of the dark, angsty variety. I’m a sucker for drama and deep emotion! But I also sometimes have things going on in my life where a bit more–lightness is called for. A good laugh. This past week has been a long one, and it definitely called for a little reading-on-the-light-side. So, I combed once again through my keeper shelves in search of favorite humorous reads.

Now, by “humourous” I don’t mean not-as-well-written, because, IMO, it’s a lot harder to write “funny” than it is to write “angsty” (as one of my old drama profs always said “Dying is easy; comedy is hard.”) Humor is also extremely subjective. What is drop-dead hilarious to one person leaves another one just annoyed. I grew up in a family where Monty Python was considered the peak of humor–it’s not funny unless it has a silly song somewhere in it. And this is still the kind of humor I still prefer, witty, odd, a bit on the goofball side–like when the Pythons dress up like British housewives and talk in falsetto. This can be hard to capture in a novel, just as (again IMO) slapstick is well nigh impossible. But funny conversation, ridiculous situations, mistaken identities–all these can be terrific.

These are a few favorite funnies I found on that keeper shelf. A couple interesting things–I don’t keep nearly as many light books as dark ones, and there were far more trads than historicals. But these are all titles I loved.

1) MY LADY’S SECRET by Cindy Holbrook (she had several funny books, as I recall, but for some reason this is the only one on my shelf. I probably loaned the rest to my deadbeat cousin and never got them back)
2) THE PIRATE NEXT DOOR by Jennifer Ashley (who knew pirates–aside from Johnny Depp–could be so much fun?)
3) MISTLETOE MAHEM by Kate Huntington (I adore funny Christmas Regencies, and this one is a gem. Sophisticated, clotheshorse heroine who doesn’t much like rugrats falls for a man who is guardian to a slew of them. Holiday hijinks ensue.)
4) Several by the queen of Regency comedy, Barbara Metzger, including MINOR INDISCRETIONS, SAVED BY SCANDAL, and SNOWDROPS AND SCANDALBROTH
5) WHAT CHLOE WANTS by Emma Jensen (bounciest heroine EVER, but it’s cute)
6) MUTINY AT ALMACK’S by Judith Lansdowne
7) THE IDEAL BRIDE by Nonnie St. George
8) MISTRESS by Amanda Quick (plus a few others–this was just the one that stuck in my mind)

Now, I’m curious–what makes you laugh? What makes you groan in abject annoyance? And what are some favorite funny reads (so I can go look for them)? (And this is my newest cover, transformed into Hello Kitty in Luv by the wonders of photoshop. Hopefully good for a laugh)

I was just thinking about funny books, thinking about how hard it was to translate humor without being broad. I loved Aunt Sophie’s Diamonds by Joan Smith, Miss Treadwell’s Talent by Barbara Metzger, Miss Lockharte’s Letters by Barbara Metzger…actually, I don’t think Regency romantic writing gets funnier than Metzger. And I loved Nonnie St. George’s Courting Trouble even more than Ideal Bride. Oh, and Miss Lacey’s Last Fling by Candice Hern.

A lot of good ones mentioned. May I say a word for Georgette Heyer? Things like the play with language in ARABELLA, where her brother’s friend tries to explain to Arabella that her brother is in debt and drunk, and Arabella draws all sorts of panicky conclusions from the cant involved. Or the fun of seeing Lord Alverstoke taken for a ride by FREDERICA’s family?

I like comedy best when it’s character-driven. A wonderful bit from Loretta Chase’s LORD OF Scoundrels is where the hero, Dain, has been acting all moody and tortured (possibly even raking his hair and striding around, I would have to check back). The heroine tells him it’s OK, she understands he’s a “high-strung thoroughbred” and he growls back that he’s no such thing. I loved it!

Ah, a lot of great books have been mentioned!

My favorite funny books include:

— SWEET AND TWENTY, IMPRUDENT LADY and PERDITA by Joan Smith
— FRIDAY’S CHILD and COTILLION by Georgette Heyer
— MINOR INDISCRETIONS, AN EARLY ENGAGEMENT, and AN AFFAIR OF INTEREST by Barbara Metzger
— AN IDEAL BRIDE by Nonnie St George
— NORTHANGER ABBEY by Jane Austen

I really love comedy — to me, it’s an art. Even if I’m not laughing out loud, if the comedy is well done, I can sit back and enjoy it intellectually, the way one enjoys Bach. Pleasing to the soul, as well as the mind.

What makes me laugh? Well, my fair Mrs McCabe (or is it Miss? Or Lady?), I laugh at:

1. Sheridan’s plays — he was such a wit, before he joined Parliament and became tedious like all the other MPs.

2. TRISTRAM SHANDY, though perhaps sheltered ladies like certain of the present company would never read something so warm, so perhaps I oughtn’t mention it after all.

4. The Prince Regent, at all times.

I hope this answers your question, O Fair One!

Okay, I just noticed something shocking.

who knew pirates–aside from Johnny Depp–could be so much fun?

Ahem. Amanda? Are you feeling well?

Did you really just say that Orlando is not fun???

I love Metzger! She is always funny, but at her best is absolutely hilarious. And Nonnie St. George’s IDEAL BRIDE is one of the funniest books I’ve read in a long time. My wife can attest that I went around for months afterwards saying things like “She does not meet the requirements of my list!” and “What portion of a gentleman’s anatomy is his warehouse, exactly?”

Haven’t read COURTING TROUBLE yet, but it’s on my list! (And I’m sure it meets the requirements thereof.)

To venture a bit outside of the Regency, I also love some of wits from the late 19th/early 20th century: Oscar Wilde, Saki, and P.G. Wodehouse, in particular.

But I see I had better stop, because this is getting too silly.

Shocking, I know, Cara. 🙂 Orlando is handsome, dashing, fun to look at definitely–but fun, in a funny sense? Hmmm, not so much. At least not in POTC.

And lovely to see you here, Sir Bertram. You are most welcome to our humble salon. And you may call me Princess Amanda. As my parents do. 🙂

Orlando is yet another thing we have much in common. Oh, the goofy looks I’ve gotten on my face when seeing him! I just tore open my husband’s GQ to get to the pix inside his cover story. Mm. Dishy.

There’s an Orlando cover on GQ this month!!! I must go get a copy, right now. 🙂 You should have seen what a fool I made of myself when I went to see Elizabethtown last week…