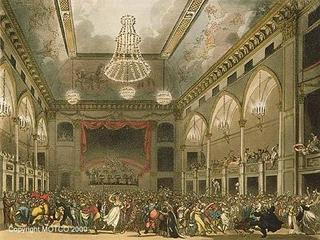 I’m staying up a bit late tonight, working on an appropriately raggedy and colorful Pippi Longstocking dress. Fortunately, this is one of the easier Halloween costumes I’ve made for my children (my sewing skills are very modest). I’ve made costumes including Dorothy and Princess Ozma of Oz, Madeline and the planet Saturn. We had a great time with that last, painting the rings together and then sprinkling on copious quantities of glitter. There’s no such thing as too much glitter!

The Georgians loved to dress up, too. Popular guises included Greek and Roman gods and goddesses, historical figures and people from foreign lands: Spaniards, Turks and the like. Here’s a scene from a masquerade in 1809 at the Pantheon Theatre.

At its height in the eighteenth century, the popularity of the masquerade had begun to wane by the Regency; still, many authors have used masquerades in their stories. I’ve had two: the first in “The Wedding Wager”, a novella in HIS BLUSHING BRIDE, in which Lady Dearing of LADY DEARING’S MASQUERADE first appeared. It seemed fitting to start her story with a kiss at a masquerade, too.

The concept of masquerade is so seductive. Donning a costume, one could pretend all sorts of things. During the Georgian period, anyone with the price of admission could attend a public masquerade, so members of differing classes could and did mingle there. Duchesses could be shepherdesses, and vice versa. People often made a real attempt to disguise their identity, altering their voices, etc… So a practical person could be playful, a shy one outgoing, etc… But it begs the question as to which aspect is one’s true nature: the everyday persona or that which is revealed through the masquerade?

Another seductive aspect is the idea that for a night, one can be a different person, and then return to reality without consequences. Kind of like the fantasy of a perfect one night stand. But there are always consequences…

And of course, opportunities for seduction abound at a masquerade. Always fun in a romance!

Though I think most, maybe all, romances contain an element of masquerade. Usually one or both main characters has something to hide; peeling back the layers is often what keeps one turning the pages.

A couple of my favorite romances with masquerade elements:
-Georgette Heyer’s MASQUERADERS, of course (which has a masquerade within a masquerade)
-Mary Jo Putney’s DANCING ON THE WIND

I’m missing scads here, but rely on the rest of you to remind me. I’m afraid the strain of creating a Pippi wig out of a skein of orange yarn must have fried a few brain cells!

Oh, I love a masquerade! At least, in fiction they always seem like such fun. (And give great scope as a plot device, too!) Of course, it’s helpful if you have a maid to sew your costume rather than having to make it yourself. 🙂

From some Restoration and 18th century comedies I’ve read, it seems like ladies and gentleman often went masked whenever they were attending a gathering that was not quite respectable–whether or not it was a masquerade as such. I wonder how common that really was. Can you imagine someone doing that nowadays? (Except at Halloween, of course.)

Shakespeare’s comedies are full of women dressed as men (or boys). But I’ve read at least one book that claims there is at least a grain of truth in the idea–in “The Birth of the Modern” by Paul Johnson, he says that it was not uncommon, at a time when the roads were unsafe, to dress young women as boys, to lessen the chance that they would catch some brigand’s eye. The same reason is given in “As You Like It” for Rosalind’s masquerade, so maybe it really did happen sometimes.

And there are at least a few examples of women who passed as men for extended periods–on board ships or in armies. Though you have to think at least some of the people around them must have known.

Elena wrote: Though I think most, maybe all, romances contain an element of masquerade. Usually one or both main characters has something to hide; peeling back the layers is often what keeps one turning the pages.

Well, that’s certainly true of my heroine! And I hope it keeps people turning the pages. 🙂

Masquerades are central to the plot of the 18th century play “The Belle’s Stratagem” — the heroine has made a poor impression on the hero, who thinks she’s boring and unsophisticated, so she masquerades as a dashing lady at a masked ball and gets him to fall madly in love with her. Of course, he ends up being misled by another man into thinking she’s someone else entirely! Very funny.

If I had a maid to sew my costumes, I would have such fantastic ones! 🙂

I’ve got a masquerade in my book, too, which is primarily an excuse for the heroine to get to ogle the hero’s chest in his Puck costume (her name is Titania, like the Queen of the Fairies in Midsummer Night’s Dream–get it?). I liked thinking about what people 200 years ago would think was fun to dress up as, so my heroine dresses as the Duchess of Devonshire, a woman who was famous at the turn of the century. Kinda like dressing like Nixon for Halloween now.

At first I thought “Oh, there are lots of Regencies with masquerades!”–then I couldn’t recall very many (granted, I have been eating copious amounts of Halloween candy lately, so I’m a bit of a slow-top). There was a Signet Regency a few years ago called Lady Hillary’s Halloween that (duh) featured a Halloween party, and there was another one (can’t remember the title or author) where the heroine was dressed in a kimono on the cover. Oh, and there were several Cartlands where the heroine was either pretending to be someone else (there was one where she was pretending to be a scandalous actress, but I think the fact that she was so darned prissy should have given her away), or attended more straightforward costume parties.

I love the idea of the heroine dressing as the Duchess of Devonshire! I definitely know I haven’t seen that in a book before. 🙂

And good luck with the Pippi costume, Elena! That is so cute. I’m currently engaged in trying to find a tiara for my costume.

I’ll be spending Halloween writing a midterm exam for my poor, suffering students. So, even without a costume, they will all know me for the Wicked Witch of the West! Bwahahahah!

Hmm… I’ve attended a few masquerade balls in my time. Friends tell me I should go as Adonis, but I hate to be cold.