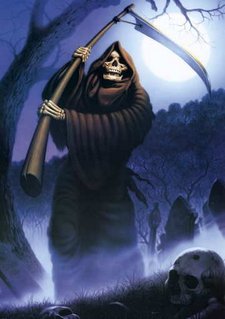 Villains. In some romances, villains are two-dimensional characters set on one thing (Revenge/Rape/Disgrace/Financial Gain/Name Your Poison). They are obvious in their intentions to everyone but the oblivious hero and/or heroine, and they are what makes some well-written love stories go down the tubes for me.

And you would think writing about evil would be so easy! And fun, too! After all, Milton spends oodles of time writing about Satan, and Satan comes off as much sexier and fun than the other guy. Satan talks about his choice of Hell as a residence:

Here we may reign secure, and in my choice
To reign is worth ambition though in hell:
Better to reign in hell, that serve in heav’n

For me, the best villains are those characters whom you can’t tell are villainous from their first appearance on the page. What are their motivations? How will they attempt to achieve them? And then, when the book is over and all is revealed, you can reflect on how the villain fooled everyone, including the reader. Shakespeare says it better than I do:

And thus I clothe my naked villainy
With old odd ends, stol’n forth of holy writ;
And seem a saint, when most I play the devil.

Villains who end up being heroes or vice versa appear in Edith Layton’s False Angel and The Duke’s Wager, Mary Jo Putney’s The Diabolical Baron, Falling For Chloe by Diane Farr, Lady Sophia’s Lover by Lisa Kleypas, Bliss by Judy Cuevas . . . the list goes on and on (for more villains, check out All About Romance’s Special Titles Listing on Villains, which gives details about who becomes a hero/heroine in subsequent books). 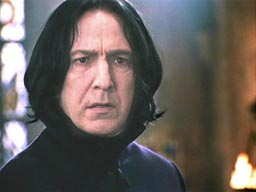 I think that uncertainty is why we are fascinated by Harry Potter’s Professor Snape (the six year-old and I are reading Prisoner of Azkaban now), as well as Gollum from LOTR. My own private obsession, HBO’s Deadwood, features a masterful villain in the character of Al Swearingen–he’s murdered, stolen, and lied, not to mention swearing all the time, and yet there are times when you root for him. 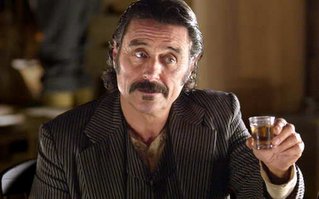 Villainy can be scandalously sexy.

Which is why, this Halloween, you’ll be seeing many more devils**, witches, vampires, and werewolves than Good Samaritans, pilgrims progressing, Mother Theresa, and Gandhi.

Thanks for coming over to the Dark Side with me for a moment,

*Cara, I promise I had nothing to do with my son wanting to dress in a long, black robe.
**After six years of being a witch, my son made me switch to dressing as a lady-devil. I bought my red sequin horns, tail and pitchfork yesterday.

Villains are tricky (though important) in romance. If they’re too good (or too bad, however you look at it) they could be overkill. A Hannibal Lecter type could take the story away from hero/heroine. NOT a good thing!

Villains can be so hard. Romance writers are usually nice people. We want to write about love and good relationships, so for some of us (me included) it’s uncomfortable to get inside the skin of someone evil. It’s important to try, though!

I guess as a reader, I don’t require villains to be exactly three dimensional — there often isn’t time for that — but I do like them to have some motivation for what they’re doing. 🙂

Romance writers are usually nice people. We want to write about love and good relationships, so for some of us (me included) it’s uncomfortable to get inside the skin of someone evil.
I must not be that nice. I like writing about not so nice people. And I just don’t want my villains to just be there as obvious plot devices. As you say, Cara, some explained motivation makes it better for me.

I also really like the villains in some books–what does that say about me? 🙂 I’m going to have to start writing down all the books I read and plot notes about them, because unless I really love them or really hate them, I forget the details. The point of this, is that several years ago I read a book set in (I think) the eighteenth century in Ireland. The heroine was magical somehow (a witch or fairy or some such), and there was this great villain, a British officer with long blond hair who falls in love with the heroine, but he’s, well villainous, so she doesn’t love him back and bad things happen. I can’t remember the title or author now, alas, but there was a sequel starring him as the hero, where he had gone wimpy on me. Sigh.

It bothers me sometimes in books where the villains are all but frothing at the mouth with eeeevil and the hero/heroine are too dumb to see it until he kidnaps the heroine and throws her down a well. I like to see motives.

Megan,
I know lots of authors who enjoy writing villains as well as those who have trouble with them. I think it may be a matter of getting in touch with one’s own dark side.

So far I’ve done better with the sort who can be recycled into heroes. See, I may be scared of examining my own Dark Side but I am at least environmentally aware!

Or possibly a bit loopy after several kids’ Halloween parties.

Hi! I found your blog searching for posts to do with my mother, Edith Layton. But I’m only commenting because you might not know that my mother’s first book, The Duke’s Wager, was accepted by an editor who said all she had to do was change the ending so the villian didn’t get the girl.

Although my mother was desperate to be published, she stuck by her guns and refused that tempting offer.

It took a few more years, and a lot of almost giving up on being a novelist… but as you already know, she eventually found a publisher willing to take the chance!

Glad I found this neat site and I will be reading!

I definitely remember that book. The hero certainly was a rake! Of course, the man who appeared to be a slightly “nicer” guy turned out to be just as rakish, but didn’t love the heroine — so her choice seemed clear to me! Glad your mother stuck to her guns, and glad she finally found a publisher who saw the light!