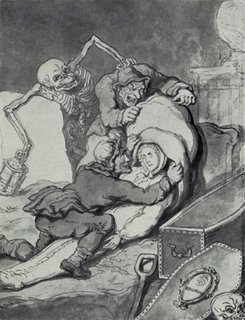 An add from The Wooler’s British Gazette in 1822 (partial text)*:

“Many hundred dead bodies will be dragged from their wooden coffins this winter, for the anatomical lectures (which have just commenced)…the only safe coffin is Bridgman’s Patent Wrought-iron one… Those undertakers who have IRON COFFINS must divide the profits of the funeral with EDWARD LILLIE BRIDGMAN.”*

It seemed that the bodies of executed prisoners was in short supply, forcing surgeons and students to seek bodies by other means. This meant that if one were interred in an ordinary wooden coffin, there was a good chance that the churchyard would not be one’s final resting place.

Physicians were willing to pay a good price for dead bodies, and hence the growth of the business of the “Resurrection Men.” A body snatcher could deal his way to a higher price by threatening to sell his bodies elsewhere. On occasion, a particularly interesting specimen could bring a pretty penny…in 1783 a young Irish Giant named Charles Byrne, in the process of dying and having heard that his body was desired by a Scots surgeon named John Hunter, took every precaution to insure the safety of his body after death–but Hunter at last parted with the outrageous bribe of L500 to obtain Byrne’s body. If you would like an even more ghoulish note, so frightened was Hunter that his prize would be stolen from him in turn that he immediately boiled the flesh from Byrne’s body in the dead of night and preserved the skeleton.**

Obviously, moonlight was not the friend of the body snatcher. Complete darkness was needed to carry out the work. Additionally, it became necessary to have a scout at the gravesite, at the end of services, to spot any traps…then once it was dark, the robbers quickly dug down to the head-end of the coffin, broke through and pulled the body out head-first, disturbing the site as little as possible. One disposed of the grave-clothes also, as the punishment for being caught with a corpse wearing grave clothes was much greater than being caught with a naked body.***

But graveyards were not the only source of bodies, particularly as the demand grew and graveyards became more guarded. Bodies were obtained by subterfuge from workhouses and such places…and eventually, even by murder.

A murderous pair named John Bishop and James May worked London’s East End in 1831 until a suspicious surgeon called the police. They were tried and convicted, and their own executed bodies were delivered for dissection. **** Unfortunately for them, or perhaps because of them, the Anatomy Act passed short months later, doing away with the practice of giving the bodies of the executed to the executioner for disposal. Eventually, the practice of donating bodies for medical practice and research lost its negative connotation, and the “Resurrectionists” went out of business.

So there’s a spooky bit of history for the season…Happy Halloween!

There’s a fantastic book by Sheri Holman called the Dress Lodger that touches on some of the controversy involving the doctors who wanted these bodies. Really fantastic, but not a romance.
Thanks for the details, Laurie!

This Dr. Hunter who obtained the body of that large young man Charles Byrne was also considered to be a great contributor to medical science, but his determination to get that body is very creepy to me. I think the skeleton is still on display–if so, someone should show Mr. Byrne some respect and give him a decent burial. 🙁

So creepy! And I thought Buffy had it bad! 🙂

I really liked The Dress Lodger, too, Megan. It fits in very well with this post. 🙂

Eeek, Laurie! This was some interesting stuff, but scary. I wonder how I could use it in a Halloween book?

A friend of mine read that book and said it was amazing.

Laura Kinsale actually used the corpse stealing stuff for some excellent gallows humor in FLOWERS FROM THE STORM.