Penny for the guy? 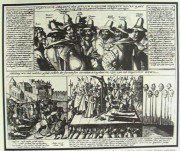 Remember, remember the fifth of November,
Gunpowder, treason and plot,
We see no reason,
Why gunpowder treason,
Should ever be forgot!
In just a few days the English, that tolerant and staid race, will let off fireworks and burn Catholics in effigy to celebrate the miraculous delivery of the House of Parliament and King James I in 1605. In that year, a group of conspirators, including one Guy Fawkes, planned to blow up the above in protest of the continued persecution of Catholics. Or did they? One revisionist theory is that the group were set up by the government to turn the public against Catholics and in favor of the new and unpopular Scottish king (who apparently was also a bit of an old queen).
One of the conspirators, Guy Fawkes, was discovered on November 4 in the vaults of the Houses of Parliament with a large amount of gunpowder, and depending upon whom you read, either the stuff was too old to do any damage or there were many times as much as was needed. Below is a computer simulation of what would have happened if the plan had been successful. See more at telegraph.co.uk.

Although he wasn’t the ringleader, it’s Fawkes’ name that is associated with this band of fanatics. James I decreed that the day after the discovery of the plot, November 5, was to be celebrated as a day of deliverance. Traditionally a “guy,” an effigy, is displayed in the weeks before the holiday, and children beg money to buy fireworks. Then the guy is burned on a bonfire, fireworks are set off, and various disgusting foods (like potatoes roasted in the embers, black on the outside, crunchy on the inside) are consumed. The trend nowadays is to encourage inside parties and official fireworks celebrations to keep the hospital emergency rooms clear.
For background and real information on the gunpowder plot, visit http://www.gunpowder-plot.org/
Janet
Posted in Research | Tagged Gunpowder Plot, Guy Fawkes, Guy Fawkes Day | 8 Replies
0 0 votes
Article Rating
Subscribe
Login

What does it say about me that the potatoes sound yummy? I guess my Irish heritage is showing…but Janet, a “staid and tolerant” race? So how does your personality fit into that? Is that why you’re here instead of there?

The potatoes sound yummy to me, too. The Lithuanian in me, I suppose. Don’t even get me started on mushrooms, there’s a joke that the easiest way to kill a bunch of Lithuanians is to tell them there are mushrooms growing on a freeway…

Anyway, thanks for the post, Janet! It brings back memories of my husband’s and my first November in England (we were there for a 3-year assignment). We were so baffled and confused, trying to drive on the wrong side of the road, through all the smoke, wondering what was going on. Then concluded it was so English to celebrate someone almost blowing up Parliament! I guess the key is “almost”.

Yeah, and I love that the day is named for the guy (and I feel dopey not getting the T.S. Eliot reference until this minute).

I remember the first November that we lived in London, boys in the Tube stations stopping me to ask for a “Penny for the Guy.” I guess it’s traditional, though frankly a penny (even in decimalized currency) just doesn’t buy a whole lot of fireworks. But I suppose “A quid for the guy?” doesn’t sound as good.

As for the English being “staid and tolerant,” I mostly found that to be true. But I do remember being in England one 4th of July, and remarking to some British friends, “Ah, today is the day we cast off the yoke of our oppressors!” Strangely, they didn’t find this comment nearly as amusing as I did.

You know, for a long time I wondered whether the English were celebrating the fact that Guy Fawkes was caught, or that he almost blew up Parliament! Of course, Americans don’t celebrate “King George Day” or “The Kaiser Day” so perhaps the confusion is understandable…it seems we Americans name our holidays for the person we’re celebrating, not the person we’re burning in effigy…. 🙂

Plus, for an American kid growing up during a period when Congress was unpopular (i.e. anytime during the past 229 years) I guess either reason for the holiday seemed plausible… 🙂

One cold day sometime in the 1980’s I was in Norwich and a boy asked me for a penny for the Guy….I gave him 2p or something, horribly embarrassed that I didn’t know if “penny” was just the standard phrase, and I was actually expected to give 50p or something…or if I was really expected to give pennies! (I was a poor student at the time, and so I don’t think I’d have given him 50p anyway…but maybe 5p!) 🙂

Potatoes and mushrooms–mmmmm. 🙂 (it’s the Irish in me)

Have a great Guy Fawkes Day, everyone! I did consider making a bonfire in my backyard tonight, but I think the homeowner’s association might object

I live in California now, but when I was a child living in London, my father used to make his own fireworks…it was rather scarey-altho they never really worked! I miss the smell that hangs in the air the next morning, heavy with wood smoke and gunpowder.
Now I’m all nostalgic…
When I tried to explain bonfire night to one of my Californian friends she kept freaking out everytime I said we put a guy on the fire and burn him-I tried to explain but she thought it was yet another example of my weird Brit humour…
Kate

LOL, Kate! I guess I never thought of it, but in the US, we don’t seem to have a tradition of burning much of anyone in effigy, not that I can recall. And of course, Californians get freaky about fire — much of the state is so dry, fire can really get out of hand — so maybe subconsciously that was one reason she was freaking out??? 🙂

I’ve never met anyone who made their own fireworks…is it hard?