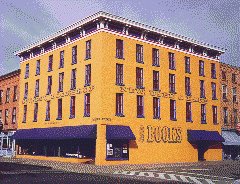 Over the course of six books, I’ve had all sorts of book signing experiences.

I’ve had a number of fantastic signings at the Waldenbooks at my local mall. The best two were during holiday weekends (Memorial Day and Labor Day) and the weather was miserable, driving crowds into the mall. I set out a dish of chocolate, smiled at everyone who passed (trying to be friendly but not too pushy) and sold a load of books.

Then there was the time the store asked me and another local author to do a “local authors” event. And scheduled it for the same June weekend as all the local high school graduations. The mall was deserted except for weirdos. Exactly two people approached us. The first a dotty elderly lady who, watching my husband play with my children nearby, expatiated at length that she always suspected men of being child molesters (ugh!). The second, a grungy character who told us he’d never met a woman who could write a book. (We weren’t sure he knew a woman who could read a book.)

Anyway, I didn’t think anything could top that one until I tried to set up a signing for my current book. The local Waldenbooks staff had turned over, but the new contact for book signings seemed friendly and cooperative. Then, about three weeks before the signing, I brought in the draft of the press release I was going to give to the local papers. Only then was I told that the district manager had forgotten to order the books and couldn’t possibly get them in on time. With over three weeks to go.

But wait. It gets better. After Waldenbooks turned down several suggestions I had for getting the books (my publisher would have supplied them), I gave up on the signing. Then, several weeks after the scheduled date, I found out from a friend of a friend that Waldenbooks had set up a table, put out my books and the staff were wondering why I didn’t show. So I missed my own signing!

But all ends well. I talked to the Waldenbooks manager and discovered that someone was supposed to call me to tell me the signing was back on. As it turns out, the manager was very nice, very apologetic about the mix-up and eager to set up a rescheduled date.

In the meantime, egged on by my ski buddy Mary, I started looking into other alternatives. I’m now set to do a signing and Regency Tea at Riverow Bookshop, an independent bookseller dealing in new, used and rare books (including some reference books that make me drool) during the Holiday Showcase in the historic town of Owego, NY.

So now I have two signings set up. If anyone can make it, here are the details:

Wow, two signings in one day? Sounds scary! I hope Owego and Johnson City are right next to each other!

I have heard signing horror stories from a lot of authors, as well as nicer stories. Your two horror stories there definitely rank up there with the best of them, Elena! (i.e. the worst of them.) 🙂 Your Owego signing in particular sounds neat!!!

My first signing is actually on Saturday (same day as both of yours — guess it’s Risky Regency Signing Saturday!) and I must admit I’m a bit nervous! Hope all of our Saturday signings go brilliantly. (As it’s my first signing ever, my mom has promised to bring some friends. I hope she brings a lot! And there are also members of my local chapter of Romance Writers of America who will probably come — knock wood!)

(BTW, if anyone lives in the Los Angeles area and wants to stop by, my signing is at the B. Dalton in Topanga Plaza (a.k.a. Westfield Topanga) which is in Canoga Park, Saturday Nov 12, noon to 4.)

Good luck, Elena!!! Hope your signings rank with the best of them, with no crazies!

Oh, I had a great comment all done, and then I forgot I was signed in as the wrong user. Feh.

Anyway, good luck on Saturday, sell lots of books and make loads of new fans, and don’t forget to report back next week on how it went. And yay for Mary for encouraging you to do the signing at the indie store.

Good luck, Elena!!! I wish I was there to drop in at the signing. And I’m LOL, but also wincing a bit, at your signing horror stories. Let us know how it all goes. 🙂

Thanks for all the kind wishes!

And Cara, best of luck with your first signing!

Remember to bring a pen that works–a friend had to lend me when my own sputtered on attempting to sign the first book. At least I didn’t regard it as a bad omen. 🙂

Okay, Elena, here’s an example of how problems should be handled:

Bookseller: “Cara, I’m so sorry, but the shipment of your books for your booksigning didn’t arrive in time. I’m so, so sorry. They swore to me they’d arrive by Wednesday, and the shipping info claims they arrived today, but they didn’t. Could you possibly do a signing the next weekend instead?”

Cara: “I don’t know if this would work, but I actually have a lot of copies of my book. Could I just bring them in for the signing, and when your shipment arrives, I get those instead?”

Bookseller: “Wonderful! Yes, that would be great.”

In two minutes, it’s all solved. 🙂

By the way, if any of you by chance are ever in the western San Fernando Valley (in Southern California), the B. Dalton Bookstore in Topanga Plaza is staffed by WONDERFUL, COMPETENT, HELPFUL PEOPLE!!!!!

I’ll just say my signing went great — hope both of yours did too, Elena! (The Los Angeles Romance Authors, or LARA, which is the LA chapter of RWA, is FABULOUS!!!!!!! They really turned out and supported me!!!)