I’m taking it easy today, fighting a stupid virus, drinking lots of tea (the hot kind, of course), trying not to feel too jealous of everyone who’s already seen the new P&P movie, and generally trying to think happy thoughts.

Which include Christmas. Now as far as I can tell, Regency folk did not hang stockings up for Father Christmas to fill. I think that tradition became more popular in England during the reign of Queen Victoria, though I’d be happy to be corrected by anyone more versed in the history of Christmas!

What I’m thinking about today is what I want in my own stocking. My husband and I always exchange wish lists, from which we choose a few items (thus keeping a tiny element of surprise). My tastes are fairly simple: books and chocolate, maybe the occasional music CD or video and/or artsy costume jewelry (I always lose the real stuff). 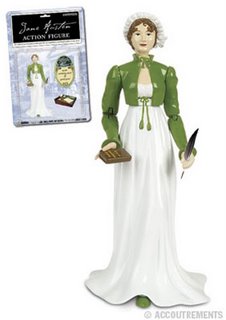 The Jane Austen action figurine from The Writer’s Store is tempting—maybe she would inspire me during dry spells in my own writing?

More videos would be great. I still don’t have a copy of the Firth/Ehle P&P, which I’d love to own, though a three-volume set could be pricey.

Mostly, however, I want books!

I love writing references, so I’m definitely asking for some of those. I borrowed THE WRITER’S JOURNEY, by Christopher Vogler, from a friend and like it so much I want my own copy, for instance.

I still haven’t read all of Laura Kinsale’s books, so some of her backlist titles are on my list. Ditto for Judith Ivory.

I’ve also met several authors at conferences and decided they were such cool people that I must read some of their books. I’m a bit embarrassed to confess this, but I haven’t ready anything by either Anne Stuart or Susan Wiggs. Does anyone have favorites to suggest by either of those authors? Any other new authors to recommend?

So what does everyone else have on their wish lists?

Wishing everyone health and happiness and everything they deserve. (We’ve all been good, right?)

Oh, Elena, I think you and I have the same sickness–loads of tea, and I have a less-sick-than-I kid on my hands today.

Anyway. I have been hinting broadly about getting a beach towel from bas bleu, which is the first page of P&P on terrycloth. I also want some cute t-shirts from pemberley.com, as well as adding many cookbooks to my wish list at Amazon.

I’ve never read Susan Wiggs either, although of course I’ve read Anne Stuart, since I find it almost impossible to write about writing without mentioning her. I’d recommend A Rose At Midnight or To Love A Dark Lord (historical), and Black Ice is pretty chillingly great, and that’s romantic suspense. Or just suspense, sometimes not so romantic.

I hope we all get everything we want! And that Austen action figure looks like fun.

Ooo…an Austen action figure! How could I have missed that!

I have a confession. I am a widow and childless, and after the passing of my precious Tojo, I have adopted 4 cats–the fourth a bit unwillingly, but I did it to help a neighbor. Anyway, I have a full time job in social work and have been at it long enough to look ahead longingly at retirement. I come home too tired to think most nights.

Having said that–I do indulge myself, perhaps a bit too much at times. I have a figurine collection, and Regency era figurines are my prizes. I also have three dolls in Regency era costume, and have big plans to sew Regency costumes. (The one I have a seamstress made for me). So far I have bought cloth and accessories, but I’ll be darned if I know when I will have time to sew! Oh, and I haunt Ebay for Regency fashion prints and have a small collection of those, too…remember, I have no kids, except the fur kind!

So…what I want for Christmas is Time. I want time to write, time to sew, and time to keep up with my fur family–beyond cleaning, I have to complete my cat-proofing. One Lennox figurine has already been beheaded, but she did glue quite nicely!

I would also like a more convenient “office,” and I have to give that to myself. Right now I am trying to figure out how to network so I can use my laptop in another room and be connected to my desktop files. I am also trying to figure out a better filing system…I have papers all over, since EVERYTHING becomes research material that I must save, it seems.

Santa and his magic might be able to locate some great out-of-print Regency era research books, especially published diaries. That would be very nice.

And lastly, I would like Jeremy Northam in costume as Darcy.

Oh, goodie, a Christmas wish list!!!
1) Matthew Macfayden
2) That Jane Austen doll from the Unemployed Philosopher’s Guild
3) The Pride and Prejudice game from Bas Bleu (only I don’t think there is anyone here who would play it with me)
4) A stroller for my dogs
5) I also collect figurines, Laurie! (Or dust catchers, as my mother calls them). My favorite on my shelf right now is a Coalport version of Anne Elliot, wearing a pale blue dress and darker blue spencer and bonnet. My wish-list includes another Coalport figurine, “Emma Hamilton”–it pops up on ebay sometimes, but is always out of my budget
6) That “inaccurate” costume from “Emma”, only in pink instead of green. And some nice pink satin dancing slippers. And dancing lessons, so I don’t make a fool out of myself at the Beau Monde Soiree again. 🙂

I wish I had time, too. Bas Bleu has a fantastic card–All She Wanted for Christmas Was a Nap–and it’d be funny if it weren’t so true. You can see it here:
http://www.basbleu.com/stores/1/Cards_and_Notes_C47.cfm

For Christmas, I want my wall space to double, so I can fit all my books on bookcases. 🙂

We don’t do Christmas, but if I did, I’d be with Laurie — what I’d wish for was Time. Actually, one does get a little time for oneself by not doing Christmas. My Little Match Girl nose-against-the-glass Jewish childhood was my price of admission, it seems, to a lifetime of relaxed holiday seasons. Chanukah presents go one-way (that is downward, agewise) and money is quite acceptable. My son agrees that it turned out to be a very reasonable deal.

And I’m soon to get a whole lot more Time — I’m getting early retirement at the end of this year. Hang in there, Laurie.

Pam
who has never gotten the Jeremy Northam thing — but might consider Robert Downey Jr. dressed as Henry Crawford.

Can I just saw, eww!

You can, Cara, but for my money he’s the baddest most brilliant boy on the block, and my pick for the Mansfield Maudit of my dreams.

Okay, this is actually going to work well, Pam. I back your claim to Robert Downey Jr, and you back my claim to Jeremy Northam, and we give Orlando to Amanda. Not sure who everyone else gets, but so far, it’s looking good!

I should just point out that Laurie has already claimed Jeremy Northam. I’m not sure how this conflict will be resolved, but cloning may be required. Anyway, when you get him he can move into the room next to Jennifer Ehle.

More time sounds like a good gift–I can spend it reading all the books that I’d like for my other gifts, but that I don’t have time to read.

Christmas as we know and loathe, sorry, love really began as a form of mass hysteria and commercialism after the publication of Dickens’ A Christmas Carol (1843) and the adoption of some European customs such as the tree (from Germany, and that may have been Prince Albert’s contribution). Other than some lowclass things like 12th Night celebrations and wassailing, I suspect that outside of the wonderful world of Romance, the gents and ladies of the regency celebrated Christmas by going to church.
Janet (call me Scrooge)

Who gets Colin Firth?

And, btw, I think Mathew McFayden (sp?) is man enough for both of us, Amanda. I saw P&P yesterday. I loved Mr. Broody.