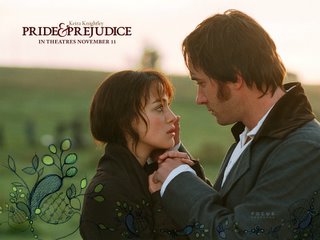 Now, in reality, the world have paid too great a compliment to critics,
and have imagined them to be men of much greater profundity then they really
are. –Henry Fielding

Thank you, Mr. Fielding. I hope to remember to be humble. I have finally seen the new Pride and Prejudice movie (I am not addressing this part to Mr. Fielding, as he is dead of course, and the book was written about 60 years or so after his time) and I am weighing in.

Firstly, I welcomed it with delight. As I sat in the theater during the opening scene–a marvelous, expansive scene of a country sunrise–I thought of how much I enjoy seeing a new adaptation of this old novel. And I asked myself not to expect it to be what I…er…expected. I know the novel, having read it several times, and I don’t mind seeing something that adds to it. In fact, I love being shown something more about the characters I love in a credible way. But I tend to be rather protective of the story, and hate to see it unnecessarily tweaked, and heavens–altered.

I attended the movie with four friends–all of whom are familiar with the story from previous film versions. One is currently reading the novel–she hadn’t finished it yet, but she does have a good grasp of the period.

I had made some critical remarks before about some movie photographs re: costuming, but now I am going to take them back–because I feel the movie did an excellent job with that. It illustrated very well the difference in dress between an ordinary young woman and a member of the nobility, and I also admired how Mrs. Bennett was dressed in the style of her own youth–something I feel is realistic for a woman of her time who did not have the time or money to spend in London keeping up with the latest style, and like many older women of today, chose to stay with what she was used to wearing. Even her shoes were of a Georgian style–shabby and soiled, but right. For that, I am (as Jane would say) all admiration.

I have mixed feelings about the relative poverty the Bennetts were shown to have. (If you haven’t seen the movie yet–although I believe I am one of the last to have seen it–the Bennett manor house seemed to be in the center of a barnyard). Possible–certainly. Intended by Jane–I tend to doubt. The Bennetts in this movie appeared to be more like a relatively well-to-do farm family than gentry. They were restricted financially, but I believe that they would not have lived so inimately with their livestock. Mrs. Bennett was conscious of appearances, and if they could afford expensive ball gowns for their daughters, I should think they could afford to have fences. Ahem….

Other story elements…I have to wonder if someone not familiar with the story could have followed it in the film very well. I can’t have that perspective, and neither could any of my friends. Has anyone heard anything in that respect? The scenes cut rapidly from one to the other, leaping across time without giving any indication of it. There was almost a feeling that the story took place in a few weeks’ time instead of several months. And I did miss the nuance that the eliminated scenes could have provided…as a better showing of Lydia’s character before her downfall, and more of an understanding of Elizabeth’s character.

Additionally, I think it did not give Lydia’s elopement the emphasis it deserves in the story. I may be mistaken, but her act, a shattering event in the book, did not seem to come across as the crisis it would have been. Perhaps in needed more real time in the movie? I am not sure.

Nitpicks: Some scenes bothered me, as the one in which Mr. Bingley looked in on Jane in her sickroom–I am sure this would not have happened. Darcy with his shirt unbuttoned! This was a great departure from propriety for a gentleman, and if it could not have been helped, he would have begged Elizabeth’s pardon for his state–even if he was in love.

I could have done without the very last scene. ::Sigh::. Something about it seemed… well…modern to me. I was glad to learn they were already married in that scene, but their being out of doors in what constituted their underwear (with servants about somewhere) seemed a bit wrong.

Not nitpicks: In many ways I loved this movie. The characterizations were wonderful and so was the acting. I loved Darcy’s shyness, once one of my friends pointed out that his discomfort was likely due to not knowing how to act when socializing with his inferiors–and I mentally kicked myself for not thinking of that. In short, I want to see the movie again. And I feel it will generate more interest in Jane Austen, and this is always good! And I did love that kiss in the proposal scene, in spite of Darcy’s shirt. Some things are just timeless.

Thank you for tolerating my reflections on this movie, since it is not a new topic here. I am going to go back and read previous opinions given in Risky Regencies now that I have a perspective.

Elena and Cara– I just re-read your posts on Pride & Prejudice and can now appreciate them fully. excellent critiques of the movie!

I loved the movie, but didn’t like the modern ending either–or, rather, I wish it had more of the passion that has been building up throughout the film. The ending felt too cute.

Thanks for offering your perspective, Laurie. I know I’ve offered opinions about it in comments–what about Amanda and Janet? Did you guys see it? I forget–it’s late–and if so, what did you think?

Laurie, agree with your take on the movie, too.

I think some of the exaggerations (like the semi-squalor of the Bennett household, in contrast with the serenity of Pemberley) were deliberate and intended to make things clearer to those who haven’t read the book. Also to distill the subtleties of the book into a couple-hour format.

I’m going to see it again on Tuesday night, with my husband and hopefully another couple we know. The other three have not read the book, so it will be interesting to get their take on it. I’ll let you know!

Elena–I agree re: the exaggerations [Elena: “intended to make things clearer to those who haven’t read the book. Also to distill the subtleties of the book into a couple-hour format.”].

I also noticed in Ebert’s review (and one of you may have mentioned it) that the book took place earlier, i.e. the late 1700’s, but I actually don’t think it appeared to be earlier than Jane intended. The costuming looked like the early 1800’s to me.

I’m really curious as to what your friends think of the movie!

Megan–“Too cute” as a description for the ending fits, imo. It took away from the drama I think. I absolutely agree.

The book does continue to explain (not show) what happened to the marriages, but I don’t think anyone expects to see that in the movie (Elizabeth bringing Georgiana out of her shell, teaching Darcy to ‘lighten up,’ Lady Catherine’s eventual forgiveness, the visits between the families, the sadness of of Lydia’s marriage, and of course to say that Elizabeth’s and Jane’s marriages were happy ones).

I also really love this movie! Actually went and saw it for the second time yesterday, and enjoyed it even more than the first time. But I agree that the ending should go. It was “cheesy” and didn’t go with the rest of the movie. Mercifully, it was short. 🙂 I wouldn’t have minded seeing a wedding scene, like in the 1995 version.