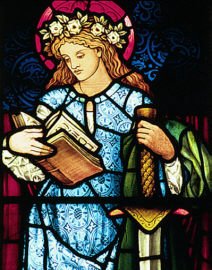 It seems to me that I would have done very well with a Regency Christmas. As far as I can determine, there was little in the way of celebration, especially as we now know it, in the Regency period prior to 1815. Customs such as Yule-log burning and decorating with greenery were apparently considered rustic by those of a more elevated position, who left the more primitive celebration to those who were more common. One did dine with one’s friends, and practice charity to the poor at Christmas time, but it was “undignified” to celebrate in any more frivolous way.

Well…I do have a struggle between wanting to do the season justice and dreading its demands. I so love the end results–the sparkling house, the cooking smells, the evergreen, the red ribbon and lights, the candles, the wrapped gifts resting mysteriously under the Christmas tree in the pale light of dawn. BUT…the big BUT…fate seems to conspire to keep me from getting there.

Being a single woman keeping her own house, one would think I could have it under control. Not so. Between a full time job, writing, housekeeping and the deepening snow I soon discover that it is DECEMBER 18TH AND I HAVEN’T SENT OUT ANY CARDS YET. And that is just the beginning.

I know that my stress is shared from my friends. At work, I hear one fretting about the cost of a child’s preference of gift, another bemoaning having to visit the mall yet again, and another worried that her grown child will not be able to visit. There are some who seem to be able to do it all and more, of course, but I can only think of them with awe.

Back to Christmas in the Regency…something about the very simplicity of their celebration appeals to me, although I am inclined to be a bit contrified in my views, because I favor the evergreen and holly and mistletoe and the roaring fire. I like the empasis on charity, too–and food. Who can’t like food?!

Okay, now I have arrived at something. I decide to look up some Regency Recipes in a handy reference, THE NEW FEMALE INSTRUCTOR, published in 1834.

TO ROAST GOOSE
“After it is picked, the plugs of the feathers pulled out, and the hairs carefully singed, let it be well washed and dried, and a seasoning put in of onion, sage, and pepper and salt. Fasten it tight at the neck and the rump, and then roast.” [My note–I am assuming the insides were cleaned out; I imagine this was thought to be understood!]. “Put it first at a distance from the fire, and at degrees draw it nearer. A slip of paper should be skewered on the breast-bone. Baste it very well. When the breast is rising, take off the paper; And be careful to serve it before the breast falls, or it will be spoiled by coming flattened to the table. Let a good gravy be sent in the dish.”

Good heavens. The goose is looking like a bit of work. I had no idea my goose could go flat. I decide to pass on to dessert.

PLUM PUDDING
“Cut a pound of suet into small pieces, but not too fine, a pound of currants washed clean, a pound of raisins stoned, eight yolks of eggs, and four whites, half a nutmeg grated, a tea-spoonful of beaten ginger, a pound of flour, and a pint of milk. Beat the eggs first, then put to them half the milk, and beat them together; and by degrees stir in the flour, then the suet, spice, and fruit, and as much milk as will mix it well together, very thick. It will take four hours boiling. When done, turn it into our dish, and strew over it grated sugar.”

Not so bad. Not very different than certain of today’s recipes, especially if you have one that has been handed down in the family. A lot of work, still do-able. But I’m not too keen on the suit. I wonder what it will do to my cholesterol levels.

Better consider what to drink.

ENGLISH SHERRY
“Boil thirty pounds of sugar in ten gallons of water, and scum it clear. When cold, put a quart of new ale-wort to every gallon of liquor, and let it work in the tub a day or two. Then put it into the cask with a pound of sugar candy, six pounds of fine raisins, a pint of brandy, and two ounces of isinglass. When the fermentation is over, stop it close; let it stand eight months, rack it off, and add a little more brandy. Put it in the cask again, and let it stand four months before it is bottled.”

Ahem. Nothing to drink until next year. Oh, hey, just give me the brandy.

Perhaps I will stop bemoaning today’s Christmases. Either that, or I will go back in time as a wealthy woman with a cook and a full housekeeping staff. Until then…

Link–Jo Beverley’s page on the Regency Christmas, done much better than I could have done: http://members.shaw.ca/jobev/xmasarticle.html

No matter how simple their Christmas was, I bet some woman somewhere was bemoaning the lack of time to do something also…there IS a ton of stress around this time of year, from the goose-plucking to card-sending to charitable-donation deciding.

It should be a time of warmth, and comfort, and all, but we sometimes forget that stuff because we’re all so worried about the end result. And I bet Regency women got worried, too, even though what they did was so much less than what we demand of ourselves now.

So, yeah, pass the brandy, enjoy what you can do, and try not to worry about the rest.

Gotta take my mind off all this stress…I’m going to the movies! 🙂

I’m afraid I haven’t yet sent out a single Christmas card either! Don’t know how the time got so late. I guess this week will be busy! 🙂 Oh, well, at least the presents got mailed…

I’ve tried making some traditional Christmas dishes myself, with reasonable results–I’ve roasted a goose once or twice, and made spiced beef (which is a long, messy process, but surprisingly tasty). I’ve never dared to try my recipe for Christmas Pie, though–it calls for four or five kinds of meat, and serves thirty! I don’t think I have a big enough oven–or enough friends to eat it.

I remember having a flash of illumination one time–surprising how grasping the obvious can be so surprising–that most of the traditional English dishes at Christmas (plum pudding, Christmas pie, spiced beef, Stilton cheese and port) were preserved foods of one kind or another. Of course, Christmas being in winter, there wouldn’t be much in the way of fresh produce.

So it’s jolly to experiment with old recipes, but I’m just as glad we have refrigerators, gas ovens, and central heating. 🙂

I’ve been trying to simplify in many ways over the past few years…and was doing pretty well this season until my youngest brought home yet another stomach bug last week. That did throw me off. Yikes!

The other complication is in our family we do Christmas and Hannukah (my husband is Jewish). But food is one of the pleasures. I always make at least three kinds of latkes (potato, vegetable and corn with cumin–yum!) and as many kinds of Christmas cookies as I have time for.

Yesterday I made something called Grasshopper Squares, from a Gourmet magazine recipe. Fussy, since they’re three layers (brownie, mint and chocolate frostings) but melt-in-your-mouth rich and chocolaty. Another Big Yum!

Elena, planning not to weigh herself until well past the New Year

I’ve never heard of corn latkes before, Elena! They sound really interesting — especially as I love cumin…. I may have to ask for the recipe one day!