So, does anyone want to report in on how the “Read a Regency” challenge is going? Has anyone read any good Regencies recently?

Here’s a list of some more award-winning Regencies. These all won the Romantic Times Reviewer’s Choice Award for best Regency:

1996 — THE DEVIL’S DUE by Rita Boucher
1997 — MY WAYWARD LADY by Evelyn Richardson
1998 — BEST LAID SCHEMES by Emma Jensen
1999 — MARIGOLD’S MARRIAGES by Sandra Heath
2000 — LORD NIGHTINGALE’S DEBUT by Judith A. Lansdowne
2001 — SUGARPLUM SURPRISES by Elisabeth Fairchild
2002 — THE DISCARDED DUKE by Nancy Butler
2003 — THE INDIFFERENT EARL by Blair Bancroft
2004 — A PASSIONATE ENDEAVOR by Sophia Nash

Has anyone read any of these? Any comments on them? 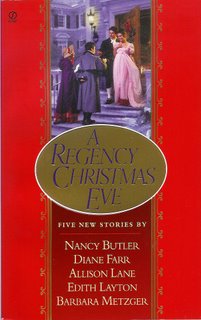 I own every Signet Regency Christmas collection ever (I’m far older than I pretend to be) đź™‚ and have read just
about every story in every one of them. They’re always enjoyable, and often fantastic!

Two of my favorite stories, both in the collection A REGENCY CHRISTMAS EVE (2000):

“The Christmas Thief” by Edith Layton. Funny, touching, and beautiful. First line:
On the day before Christmas, Lt. Major Maxwell Evers rose early, as was his habit, washed, dressed with care, and went out to steal a Christmas present.

“Little Miracles” by Barbara Metzger. Hilarious, sweet, and romantic. First lines:
They were as poor as church mice. No, they were the church mice.

Which are some of your favorite Regency Christmas stories? Or have you read any good Regency romances lately? Reports on either would be lovely!

I’ve read both of those Christmas stories as well, and I agree that they are excellent. And yet I have a complaint:

On the day before Christmas, Lt. Major Maxwell Evers rose early, as was his habit, washed, dressed with care, and went out to steal a Christmas present.

I would just like to state now, for the record, THERE IS NO SUCH THING AS A LIEUTENANT MAJOR! Thank you! I’ve seen that in Regencies more than once and it DRIVES ME BONKERS!

I am progressing nicely through DEDICATION by Janet Mullany. Or maybe “nicely” isn’t the right adverb. But I’m enjoying it.

I’ve also started on MISS WHITTIER MAKES A LIST by Carla Kelly, which wasn’t on your list, but I’ve been meaning to read it for ages.

All hail the Regency!

Had too much caffeine, maybe? Too many students complaining about their grades? đź™‚

Heck, maybe he’s not supposed to be a lieutenant major anyway, but a very light major. Or a limited major. Or his first name is Lennart?

This, for me, is an example of something that is quite clearly and demonstrably incorrect, and yet very minor as far as the story is concerned. đź™‚ Unlike, say, the Regency I once read where a married couple had grown a tiny bit estranged, so decided on getting a quick and easy divorce for no reason at all. đź™‚

I finished my third last night. It was Viscount Vagabond by Loretta Chase. It was great fun to read.

I won’t be able to finish until I get back from vacation, though. Next up is Dedication and The Ideal Bride by St. George.

Like that cleaner shrimp in Finding Nemo said, “I’m so ashamed.”
I had the best intentions of reading some more regencies, but I needed something different while I worked on revisions, so picked up an angsty fantasy.
BUT I am still reading Christmas anthologies at night while the little guy watches TV. And there are a bunch beckoning from the shelves.
Thanks for the prod, Cara.

If there are any Christmas stories you particularly like and want to comment on, Megan, that would be great!
I confess I have yet to read this year’s Signet collection — I know I have some good reading in store. (Their collections, I think, have always been remarkably consistent in quality.)

Thanks for reporting in on your reading, Nicole! I read the Loretta Chases so long ago my memory is fuzzy — is Viscount Vagabond the one that begins with the drunken hero with his trousers down in a bordello? (That was a funny scene.) đź™‚

Well, it starts with him and her in a bordello, but don’t remember any pants down or too drunk. Hrmmm..maybe I need to check.

Maybe my memory’s fuzzy, Nicole, but I thought I remembered him sort of stumbling at one point, with either his trousers down, or while trying to get his trousers down, because he was drunk…? đź™‚ Anyway, I read it a long long time ago (when it came out, I think! guess I can no longer pretend I’m sixteen years old, huh?) so my memory might very well have embroidered the scene since then… đź™‚

I haven’t yet read the new anthology, either, but it’s sitting in my Christmas book basket waiting! Since I’m the Regency category coordinator for the Readers Choice Awards this year, I’ve been reading through books as they come in. This is a great way to find “new to me” authors and books. I’m reading Judith Laik’s “The Lady in Question” right now.

I haven’t read that one yet, I confess, Amanda, but I read Judy Laik’s first one, and it was really enjoyable! Very funny.