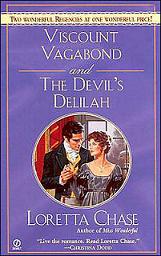 Looking over those long, gorgeous lists by Amanda and Cara, I am terrified now to admit that my list is going to be far shorter. Maybe I’ll be forgiven if I say that between writing and raising two kids, I’m always feeling shortchanged on time. Not just on time to read, but to watch TV and go to movies and such. And I know that I can’t really blame it all on the kids, either. It’s me–my muse, my creative side, which occasionally produces things that make me proud but often skitters stubbornly away when I need her to work. Then I plod on alone, because sometimes that gets her to come back just to tell me that “I’m doing it all wrong.” But the process is painfully slooooowwwwww and time-consuming… 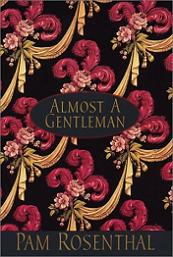 Anyway, I always have any number of great reads calling from my TBR pile. Right now, MR. IMPOSSIBLE by Loretta Chase, A KISS OF FATE by Mary Jo Putney are a just a few tempting me to blow off other responsibilities. At least I bought them in a timely manner. I’ve come to accept that I can’t keep up with my favorite authors, even Laura Kinsale, whose stories are so wonderful that it is worth waiting several years between books. But I do get to them eventually!

So I don’t dare do anything called “best reads of 2005”. That would imply I’d read enough books to compare. I’ll content myself with “great books I read in 2005”. Some of them came out much earlier (proof that I do get to my favorite authors’ backlists) and I haven’t included the Riskies, which were certainly among the best Regencies of 2005. But I’m not partial. Not at all! 🙂 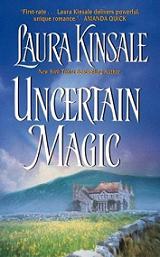 VISCOUNT VAGABOND and THE DEVIL’S DELILAH, by Loretta Chase (repackaging of two Regencies circa 1990. Both witty, funny but always with an undercurrent of real emotion.)

ALMOST A GENTLEMAN by Pam Rosenthal (A 2003 Kensington Brava, sexy but with far deeper characterization than the admittedly few other Bravas I’ve read–loved the hero and especially the heroine!)

UNCERTAIN MAGIC by Laura Kinsale (First published in 1987–a bit lighter than the more recent Kinsales, but still bewitching and with the trademark tortured hero) 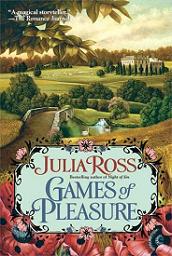 GAMES OF PLEASURE by Julia Ross (Yes, a 2005 release! And a pleasure it was. I find Julia Ross’s books consistently lush, complex and passionate, but this just may be her best yet.)

So there you have it. A short list but a good one. I thank all these authors for blessing me with these stories. May they (and all those whose books I didn’t get to) write many more to wobble on my TBR stack!

What a delightful surprise, Elena — thanks so much, and happy holidays from another slowwwwwww writer and reader.
Best,
Pam

Don’t feel bad; the only one of your final list I’ve read is Pam’s book, which I liked also (but I read it not this year).

Elena and Pam, I am exactly the same, and I was also appalled when I saw the “best of the year” topic. I just couldn’t make such a list. And I (like most women?) feel guilty very easily! But I do buy–it’s just the reading I can’t keep up with. But oh, such a glorious stack I have if I ever land on a desert island with it someday!