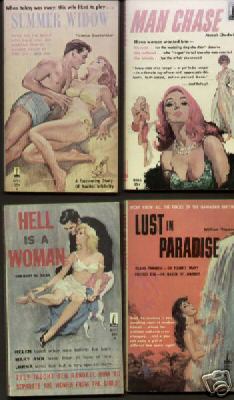 And, kicking off the daily contests–today, win a signed copy of Dedication by Janet Mullany

Man Chase by Joseph Chadwick
Three women wanted him – His wife…for the wedding ring she didn’t deserve; the redhead…who “forgot” to tell him she was married; the blonde…for the affair she craved.
What…no brunettes? What’s wrong with the man?

Hell is a Woman by Garrett W. Deas
Helen loved other men behind his back…Mary Ann loved them in front of him… Lorna loved too, but in very special ways… They taught Ben Randall how to separate the women from the girls!
Hell? Sounds like old Ben isn’t having that bad a time. And “very special ways”? What on earth could those be?

Lust in Paradise by William Vaneer
Island paradise – or tourist trap? Blissful isle – or haven of lechery?
Well, let me see, now. I wonder which it would be…

I’m a great fan of eBay, where you can find things you didn’t even know you wanted, and certainly don’t need. It was there I found this batch of pulp novels circa 1960 and which inspired my contest contribution.

Your task, dear reader, is to rewrite these (original) cover blurbs as though they were Regencies or lost masterpieces by Jane Austen. All, or one–I won’t judge on quantity, but on quality (unlike the defunct Beacon press which churned these lovelies out). If you find that too daunting, give us the first sentence(s). Grammar and spelling are not as important as wild creativity and the ability to make tea come out of my nose.

I know you can do better than that. Go to it, and win a copy of my book Dedication (which will probably seem rather tame in comparison). You have until Saturday at midnight to post your entry.

And have you entered the Treasure Hunt? Go on, don’t be shy…and visit every day for more thrills, chills n spills with daily prizes.

#1. Summer Widow: “Lady Belinda Carlton-Random, already a wealthy widow at twenty, is badly in need of a holiday. Her late husband’s family wants her out of the dower house, her precocious younger sister is demanding a London season, and her man of business wants to become her man of affairs…Will a trip to Brighton for the summer and an encounter with the ton’s most notorious womanizer lead to true love, or will she simply be Lord Grayson’s SUMMER WIDOW?”

#2: Man Chase: The Season is in full swing and Lord Gareth Grayson, wealthy Adonis, is once again at the top of every matchmaking mama’s list. Miss Mathilda Watson, confirmed bluestocking and penniless spinster, is in London for the season, but she’d rather be reading. Can a chance encounter between these two opposites bring an end to the season’s most reluctant MAN CHASE?

#3: Hell is a Woman: “Lord Peter Wilton is a fellow beset by females. His Mother demands he do his duty and marry, his hoyden of a younger sister has formed a tendre for his wastrel of a best friend,and even his mistress is becoming a nuisance. Can a lovely but managing widow with a mean right hook help him find a way out of this mess or will a night in her arms lead him to conclude that HELL IS A WOMAN?”

#4: Lust in Paradise: “When a blast from one of Napoleon’s ships leaves the HMS Bountiful in ruins on the shores of a deserted island, the passengers must learn to work together or risk life and limb in the island jungle. Can Captain Nathaniel Smithson continue to conceal his love for his first mate’s widow, or will their time on the island erupt into a volcano of LUST IN PARADISE?

LOL! These are all great.

A few more, just for fun…

MAN CHASE:”One lady got ‘lost’ in his woods to compromise him. Another hid in his carriage to entice him. Will Sir Rich N. Handsome believe that Miss Truly Loving is sincere in her affections? Or will she have to foil the schemes of all the others and seduce him herself before she can win THE MAN CHASE?”

SUMMER WIDOW: “Weary of teaching society’s spoilt darlings, Miss Prunella Prism vows not to waste her much-deserved holiday. The meek governess disguises herself as a merry widow and goes to Brighton, the most fashionable seaside resort in England. There she meets Lord Rakish, whose passions–and other assets–rival the magnificence of the Royal Pavilion itself.”

More later, if something bubbles up during my “real” (ha!) writing session this afternoon.

LUST IN PARADISE
Was Almack’s a paradise – or tourist trap? Blissful isle of country dances amid a sea of hackneys – or haven of lechery? Miss Sophronia Bartleback was to find that it was all of these — and more!

When innocent Sophy overhears the Prince Regent and Mrs. Drummond-Burrell plan an illicit assignation behind a palm at Almack’s, she is lured into a quagmire of sensuality, shocking sensations, and satin slippers. Only Sir Strongpants can free her of her growing obsession with the Regent’s sensuous mouth and curvaceous calves — but will Sir Strongpants and Miss Bartleback be able to free themselves in time from Mrs. Drummond-Burrell’s opium-laced orgeat?

And I thought I had a twisted mind!

Now how is a reader supposed to compete with these entries – I have no such imagination. And those names!

Like, Sir Strong breaking through his Pants when he finally gets Miss Bartle on her Back. LOL

LOL, Pam! Just have fun with it. We hostesses aren’t here to compete. We’re just having fun, and maybe procrastinating on our “real” work. Of course, I never do that. No indeed! 🙂

oh, this is a tough one. No writing ability in this girl. LOL Long day at work. I’ll have to think about it when my mind is not so tired. Maybe I can come up with something.

MAN CHASE
Lady Elvira Steamerskirt (pronounced: Stoort) lived a life of gay parties and dancing at Almacks, until the fateful night her father lost her to the dark and mysterious Captain MacNuggets of the 573rd Highland Regiment. Now she finds herself following the drum, as she is caught between her own turbulent emotions and the vital questions: can a man in a kilt really win her heart? And how on earth will she keep up with that annoying blister on her heel?

HELL IS A WOMAN
The Honorable Miss Brimstone would never truly know why her eccentric father had chosen to name her Helen.

LOL, Todd! It did take me a few seconds, but that was when I was pre-caffeinated.

Now that I’ve had my morning fix, how about…

HELL IS A WOMAN: His mistress, Helene, entertains other gentlemen in the house he provided for her. His fiancee, Marianne, openly flirts with–of all things–a maudlin poet. Lord Cedric Cynical knows they are just trying to make him jealous, but all he feels is boredom. That is, until he sees lovely Lady Lorna Lashley driving her phaeton and ponies in Hyde Park. One expert flick of her whip and Cedric wonders if this spirited beauty might just be the woman to cure his ennui…

HELL IS A WOMAN: Lady Helen esteemed other gentlemen behind his back… Miss Mary Ann esteemed them in front of him… Lorna esteemed too, but in very special ways… They taught Lord Randall how to separate the women from the ladies!

Keep it going, ladies (and gent), we’re getting esteemier by the post…

MAN CHASE:
Three ladies wanted him – His mother…for the squiring about town she didn’t deserve; the Diamond of the First Water…who “forgot” to tell him she smelled of the shop; the Incomparable…for the tete a tete she craved.

SUMMER WIDOW: What did Lord Byron have that her husband didn’t? Mary Shelley meant to find out – and did!

Summer Widow
Having learned that her husband had several inamoratas in the years before his death, Lady Margaret (Maggie) left behind life at the London Ton for an adventure on the beach at Brighton. While Maggie was initially a circumspect widow, everything changed when she met Lord Loverbottom and his circle of lascivious acquaintances. Maggie was soon leaving her Spencers–and corsets–behind.

I’ve been thinking about this all week and now know for a fact that creativity and writing are not my strong points. LOL But, I’m dying to read all about Adam and Fabienne so I have to try. Here it goes…

Lord William Nash
A gaming table
A pair of dice
Beautiful Lady Isabelle as the prize
Lust waiting to be released and desires needing to be fulfilled.

All these come together in a story you won’t forget.