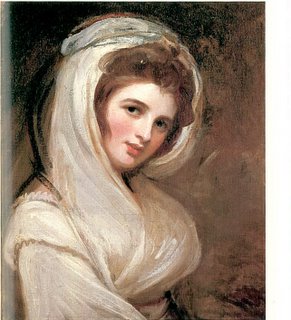 Comment on today’s post to win a copy of Amanda McCabe’s 2005 Regency The Star of India! (Plus a cover flat of A Tangled Web, the non-Hello Kitty version, thrown in)

By this time, nearly two weeks after the start of 2006, most people (okay, me) have probably already slacked off on their New Year’s Resolutions. I resolved to run every morning, go to more yoga classes, eat more leafy green veggies and less candy, read more “good for me” literature, spend less time online. Yada yada yada. Now, here I sit with a bag full of Hershey’s Nuggets searching for goodies on Ebay. 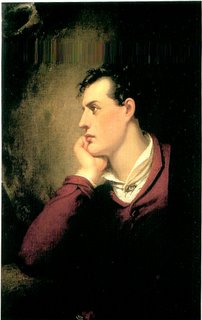 I’m not sure if resolutions were a big part of Regency life, but I did start wondering–if they were, what would all our favorite people of the period (fictional and real-life) resolve to do? For instance, some of Austen’s characters:
Elizabeth Bennett–resolve to be less proud (or prejudiced?) and emulate her sister Jane more in her dealings with people
Mr. Darcy–ditto (except for the Jane bit)
Emma Woodhouse–make no more matches. After she sees the new girl in town settled.
Mary Crawford–steer clear of clueless future vicars
Jane Fairfax–take a loooong, solitary vacation on the Continent, courtesy of her late aunt-in-law’s jewels
Catherine Norland–read fewer horrid novels and more Fordyce’s Sermons. Just as soon as she sees what’s behind the locked door in Chapter Ten…

Of course, this can be done for all manner of people. Caro Lamb–hmm, maybe she’d resolve on less waltzing, or maybe moving out of her in-laws’ house. Byron could resolve to stick to his diet of boiled potatoes (if only he had heard of Atkins…). Your task–should you choose to accept is–is to let us know what your favorite character/figure might have as their New Year’s resolution. For instance, Prinny maybe. Or Emma Hamilton and Admiral Nelson. Harriette Wilson, Prinny, the Patronesses of Almack’s, Sarah Siddons, Percy and Mary Shelley. What would they desire for 2006? (Or 1806, as the case may be!)

You can find more info on the prize at http://ammandamccabe.tripod.com

I resolve to be nicer to my powerful friends.

Megan, I was about to post something very similar!

I resolve to give up hair-raking, striding, gritting.
–Generic romance hero

–I resolve to give up leaning against mantelpieces and using cups of tea as a prop.
–my own romance heroes

I resolve to come to terms with the following: I am short, will never successfully invade Russia, and have been mean to Josephine.
–Napoleon

I resolve to stop losing bits of myself.
–Nelson

“I resolve to continue with my efforts to devote my life to the continued and deserved admiration of my esteemed patron, Lady Catherine deBourgh.”

“I resolve to spend as little time in the company of my husband as possible.”

“Resolutions? My dear lady, why should I wish to improve myself? It is my daughters who suffer from those horrid freckles!”

“I will convince that hammy Kean fellow to quit being an actor and become a clergyman instead. For his own good, of course.”

“I shall give up eating entirely. I am convinced it is bad for you. Even apples. Where’s my shawl?”

“I shall give up the pleasures of the gaming-table, so my daughter will not have to save the family fortunes by giving her hand–or any other part–to a wealthy dissolute rake.

“But what’s this? These wealthy dissolute rakes always reform? Harrumph. If that’s so, why should I? Dash it all, I’m off to Whites. Anything to improve my daughter’s prospects!”

“I resolve to stop pressing my attentions upon the young female relations of those gentlemen whose gambling debts I’ve purchased.”
–Regency dun/gaming hell owner/moneylender

“I resolve to stop telling lies and half truths in an effort to derail budding relationships between the gullable ladies and gentlemen of my acquaintance.”
–Regency Harradin

“I resolve to refrain from attempted ravishment in the dark pathways of Vauxhall.”
–Toothless ruffian/bleary eyed lecher/foxed young gentleman of good family but poor judgement

“I resolve to stop trying to kill my cousin whose place in the line of succession to the title of Duke, Marquess, Earl, Viscount, Baron, etc. is just above mine.”
–pockets to let loose screw

A resolution? Only one–on my honor, I declare–for I said to Mother the other day did I not, Mother, I said–for Miss Woodhouse had been obliging enough to remark on how well Jane looked last night–I resolve that–oh, but I did not tell you how I happened to be looking out of the window and who do you think passed, all much splashed with mud, and our maid just at that moment–dear me, what was I talking of?–and that reminds me I promised dear Mrs. Weston my quince jelly recipe, for Mr. Woodhouse himself has said even my quince jelly taken in moderation is quite wholesome, and….
–Miss Bates

Spot on Miss Bates impression! Huzzah to you, Janet!

“I resolve to spend more time with the people in Mr. E’s delightful parish. Why just the other day I was saying to Knightly that if he and his dear sweet Emma would only agree to host more gatherings I should be happy to offer my services in whatever capacity they wished. My friends have always said I have a certain flair for bringing people together.”
–Mrs. Elton

I’m going to try and exercise some and reduce the size of my own bum.

I think I’ll just lighten up this year and get more in touch with my feminine side. Hey, maybe I’ll take up embroidery!

You know, maybe that Wickham wasn’t so bad, after all.

I resolve to dance with at least one wallflower when I can when my “dear” Aunt finds a way to force me to present myself at Almack’s, but only if she doesn’t make me be polite and sample those stale cakes and god awful stuff they try to pass of as lemonade.