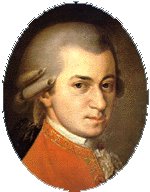 The big day–his 250th–is actually tomorrow, but I volunteered, although posting so late in the day it’s already 27th in Vienna.

Well, what can you say about Mozart that hasn’t been said, much better? Here’s Tim Page in last Sunday’s Washington Post:

It is now 250 years since Wolfgang Amadeus Mozart was born in Salzburg, Austria — and some 245 years since this prodigy among prodigies fashioned his first little pieces for keyboard under the helpful eye of his father, Leopold. The world has changed radically since 1756 but Mozart remains a constant — we continue to regard the mixture of clarity, grace and formal balance in his music with undiminished awe. He seems to have been incapable of vulgarity or overstatement: In his mature works, there is hardly a wasted gesture or a note out of place. And yet it all seems so effortless, so absolutely spontaneous.
Indeed, because Mozart’s music is so flowing, direct and eloquent, many listeners think it must be easy to perform. Nothing could be further from the truth. Although almost any third-year piano student can read through the Mozart sonatas, it is a different matter entirely to play them well . Many other composers demand more in terms of muscle, pyrotechnics and flashy virtuosity, but there is an extraordinary transparency to Mozart’s music, and any imbalance, no matter how slight, is glaringly obvious. As such, the interpretation of Mozart remains one of the supreme tests of any great musician.

Rather than rave about my favorite Mozart recordings/works (oh, okay. For the record, off the top of my head: Mitsuko Uchida playing the sonatas, Richard Goode and the Orpheus Chamber Orchestra playing the piano concertos, the Skittles Trio, the quintets, the Dissonance quartet, the piano quartets, the Requiem, the wind serenades, the Prague Symphony [38]–you know it’s time to stop when you’re in double parentheses)–I thought I’d actually try and relate this to the regency period. And this is actually a follow on from my last post on pianos–how they were used to bring orchestral music into the home.

I knew this happened later on in the century, with Liszt’s famous transcriptions of Wagner, for instance, but I was amazed to find how much material dated from our period, published in London, based on Mozart’s operas. I looked up music inspired by Don Giovanni, my favorite Mozart opera (I think, or is it The Magic Flute?) and found a website at the University of Southampton, England devoted to research on Mozart performances during the nineteenth century. And, not surprisingly, the majority of pieces are for piano, or piano four-hands, with flute and piano and flute duets coming in next. I have no idea who most of the arrangers were, and some were anonymous–Clementi (a music publisher as well as a composer and piano builder) was the only one I recognized. There were lots of arrangements of the overture (including one for harp and piano) and the big tunes, like the minuet from the final act, as you’d expect. C. von Boigelet, whoever he was, managed to concoct twelve gavottes from the opera. In 1809, The Royal Musical Magazine published an arrangement of Batti, batti (surely one of the most un-PC arias ever written) for piano four-hands.

And in our own time there’s the movie Amadeus, a very fictional account of the rivalry between Mozart and Salieri, but eminently watchable.

A fave of mine is Ingmar Bergman’s Magic Flute movie.

I did love the movie AMADEUS — and I think the problems that many music scholars had about it distorting things and lying about things were actually problems of the film medium — I think in the original play, it was much clearer to the audience that the whole story was the raving of a man in an insane asylum! In other words, the play (and the movie) were not claiming that any of what they presented was the literal truth… 🙂

I enjoyed Amadeus too, and think viewers ought to understand that some aspects are fictionalized, as with that Beethoven movie, IMMORTAL BELOVED.

I enjoyed the recording of the 1996 Glyndebourne presentation of Figaro when I researched the opera for a scene I was writing. Well done (though I leave the opera critique to those who are better qualified) and very lively. While I was watching my kids wandered over and, rather amazingly, were hooked for the remaining half hour or so. I felt like such a Good Mother.

Re AMADEUS, what I remember most and best about it was Tom Hulce, as Mozart, suddenly losing his goony clownish facial expressions to say with icy seriousness, “no one is writing better music than I am.” What I liked about Hulce’s performance was that utterly unsentimental core of KNOWING. He said it as though he were saying, “no one is writing better software than I am.”

Not being awfully musical myself, I’m embarrassed to admit how much I learned from that movie, Salieri’s monologue about the feather floating. Perhaps midcult nonsense, I dunno, but it worked for me.

And I love The Marriage of Figaro, The play AND the opera. Of course, we’ve discussed servants before — such a fascinating betwixt and between class — I’m afraid Figaro’s radicalism isn’t well enough known these days.

I do agree with Cara about the difference in clarity between the stage production of Amadeus and the film. Both of which were thoroughly enjoyable, not to mention thought provoking.

It’s so difficult, choosing a favourite piece or work of Mozart’s. So I’ll simply say that the Rondo Alla Turca is blasting from my speakers at this very moment.

There was a day, when I was 22 years old and thought I knew something about music, when I discovered that Mozart’s music was of an entirely different order than I had so far imagined. It happened on a Summer day in 1973 at Northern Virginia Community College, Alexandria Campus, when I decided to show up early for my music theory class with Dr. Serge de Gastyne.

Dr. de Gastyne was a real composer, with a quantity of published and performed symphonies, concertos and chamber music under his belt. Some time in the mid-50’s, when he was a young arranger in the Marine Band (“The President’s Own”), it was announced that his 3rd Symphony was to be premiered by the Pittsburgh Symphony Orchestra. When President Eisenhower got wind of that event, he demanded, and received, a one-off disc transcription recording, even though union rules would have normally prevented it. Serge wanted that recording, of course, and, and, unbeknownst to him, his wife, who had a friend in the White House, had the recording smuggled out, copied to tape, and returned before anyone was the wiser. At least, that’s how Serge told it.

Serge never told me why he decided to teach at NOVACOCO, but I always suspected it was because he was free to run his own show. And what a show it was! Serge was never shy about sharing his likes and dislikes, but he always did it from the perspective of professional courtesy, as one composer talking to and about another. For example, his dislike of Felix Mendelssohn’s music was no secret to us, but one day he was demonstrating the effect of a dominant seventh resolving to an altered chord built upon the the third degree of the scale, a rather obscure harmony which happened to be the very first chord of Mendelssohn’s overly-familiar Wedding March, he suddenly broke off playing the piano and confided to us that “you really have to be some kind of a genius to make THAT wierd harmony sound boring!”

Anyway, there he was, on that hot Summer day, seated at the piano playing something quite tantalizing but unfamiliar to me. It was a bizarre fugue in 6/8 time bristling with delicious dissonances, improbable jazzy syncopations and very impolitic adjustments of the bar-line. When he was finished playing he whirled around and asked me to guess the composer. We were still quite alone. I told him it sounded like a cross between J.S. Bach and Robert Schuman, which is to say that I did not have a clue. “Mozart!” he cried, “Gigue in G.” I was dumbfounded for a moment. “How did he get away with it?” I asked sincerely.

It was not until a little later, after purchasing amd devouring the complete solo piano works performed by Walter Gieseking, that I discovered that Mozart had literally dashed off that insubordinate work, not for publication, but rather quietly into the guest book of the then Cantor of Leipzig, a successor of J.S. Bach himself. Mozart, it turned out, was greatly enamored of Bach’s music (the Court librarian in Vienna had opened up his manuscript collection to him) and was generous and wise enough to allow Bach’s contrapuntal style to leave an indelible imprint upon his own very great music. My two favorite composers in the world were thus harmoniously joined together.

Serge is dead now. It is a matter of great regret that I never got to show him any of my best music. But the gift he gave me on that hot Summer day has been endlessly repaid with insights great and small.
From his teaching and example I gleaned an important truth: that composers are a brotherhood who speak not just to kings and audiences but, in a special way, to each other. I cannot listen to Mozart’s perfect and generous music without hearing an elevated but very human conversation; without feeling some kinship with that brotherhood, some connection to that guild of prophets and magicians who reach out and invent the sounds of tomorrow today.

(The contributor is the husband of his beloved wife, Janet Mullany.)

I was also once in a production of AMADEUS, and I agree that it contains considerably fewer distortions than the movie, though of course it still is the ravings of a madman. (Not sure if I mean Salieri of Peter Shaffer. 🙂