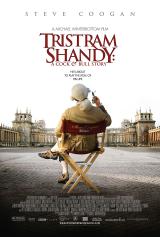 There’s a new film coming out called Tristam Shandy: A Cock And Bull Story, which “attempts to shoot the adaptation of Laurence Sterne‘s essentially unfilmable novel, The Life and Opinions of Tristram Shandy, Gentleman.” Tristam Shandy, if you’ve never read it, is a brilliant, frustrating, hysterical deconstructed novel written in the eighteenth century. It is a totally modern novel, despite being written almost 300 years ago, and Sterne’s ability to play with language and go off on tangents is comparable to twentieth-century masters such as Joyce and Pynchon.

But I’m not hear to blab about the Modern Novel, although at a more erudite time, I probably would be. As I was thinking about the Tristam Shandy movie, and how funny–and oddly true to the book’s spirit–it sounded, I was thinking about other books I read that were “classic” works of literature, and how the movies (with the clear exception of Jane Austen) just don’t evoke the same feel. And let me say there’s nothing I like more than a good–or bad–historical movie. Now, here’s where you can start wracking your brain to find more exceptions on the good side of the equation (Oh, the 1973 Three Musketeers springs to mind, actually–but Dumas was a better storyteller than a writer). Thackeray‘s Vanity Fair toned down the single-minded ruthlessness of Becky Sharpe; Thackeray’s Barry Lyndon was beautiful, but s-l-o-o-w. Henry Fielding‘s Tom Jones did a pretty good job, but lost some of the nuanced jibes that made the book’s narrative so biting (and Fielding was a darn good storyteller, too).

There have been a few versions of Wuthering Heights, all of which spotlight the oftentimes ridiculous melodrama of Emily Bronte’s prose, but miss the poignant heartbreak and longing of your first crush/obsession. Jonathan Swift‘s Gulliver’s Travels totally missed the scathing satire. There’s also Jane Eyre, A Christmas Carol, the many incarnations of Mary Shelley’s Frankenstein, Laclos’ Dangerous Liaisons (and its wimpy younger brother, Valmont)

(Caveat: Of course there are the A&E/BBC/Other Initialed creations, but they have more than two or three hours to get the job done, so they can stick to the book better.)

Of books that haven’t yet been made into films, I’d suggest Francois Rabelais‘ Gargantua And Pantagruel, a brilliant, bawdy, grotesque, sophmoric, clever book. I also think it’d be fun to read some of those ‘horrid novels’ Regency heroines (and sometimes heroes) are always reading (and sometimes writing) and see if any of those would make fun films.

So here’s where the class participation comes in: What movies have done a good job at bringing a classic novel to life? And what classic books would you like to see made into movies that haven’t been already?

Thanks for recommending some more for my film queue,

Persuasion comes to mind as a perfect adaptation, and I have to say the movie version of GWTW. I hated Scarlett in the book, but adored her in the movie because of Vivien Leigh’s performance. Hmm! I can’t think of a classic that hasn’t been filmed unless it’s some of Henry Jame’s novels. The BBC has pretty good at filming pretty much any English writer of the 19th Century. Although I’d like to see a better version of Wilkie Collin’s Basil than the version with Christian Slater and Jared Leto.

I really liked the movie of “Little Dorrit” — though perhaps the fact that it was extra long (two movies, actually) would invalidate it according to your criteria, Megan!

And I also loved A ROOM WITH A VIEW and HOWARD’S END, though I admit both of them softened Forster’s cynical (and sometimes satiric) viewpoint. (But in my happy little world, that’s a good thing!) 🙂

BTW, the Gothics that I’ve read would not make good films… (IMHO they didn’t make very good novels either! But then I’ve only read a few… If my friend Heather were here I could ask her, as she once took a whole class on the Gothic novel, but she’s always so busy…) 🙂

The strangest 19th century novel adaptation I know about is Luis Bunuel’s 1954 Mexican version of Wuthering Heights, called Abismos de Pasion. Don’t laugh. It’s dark, cruel (it begins with a shot of children torturing insects, I believe) very passionate, and oddly true to the original. Bunuel made surrealist classics in the 20s and elegant fetishistic classics like Belle de Jour in the 60s. I saw this Wuthering Heights about 20 years ago and was astonished by how wild, strange, and oddly accessable it I found it.

Not so much a comment on which movie adaptation I like, because my mind is blank like a, I dunno, can’t even think of a metaphor tonight.

But Wuthering Heights w/Larry and Merle always bothered me. Why does it end with Catherine dying? WHY? This REALLY burns me up, because by the end of the book there are three Catherines and Heathcliff’s involved with all of them. If you end after the death of Catherine Primus then you’re missing, like, two thirds of the book? Humph.

I read TRISTRAM SHANDY quite recently–or to be more accurate, I finished reading it recently, since the experience was rather, shall we say, prolonged. I loved the book. It’s hysterically funny, and just bizarre. I would read snippets of it to my long-suffering wife, who put up with them quite well. But when I first heard that they were going to make a movie of it, I was sure the director must have done way too many mind-altering drugs. Later I was told that it was really a movie about the essential impossibility of making a film version of TRISTRAM SHANDY, and I’m now quite curious to see it.

I think the chief difficulty of adapting novels to films is obvious–a novel is just much, much longer than a film. I once adapted a novel–Dorothy Sayers’ THE DOCUMENTS IN THE CASE–as a play, and I started by essentially reading the whole thing aloud, which took six to eight hours. My final adaptation was a bit over two-and-a-half hours long, and I was pretty happy with it, but I did agonize over all of the great stuff I had to cut out.

So to make a good film from a novel, one has to be able to distill the essence of the novel done into two or three hours without it becoming either incomprehensible or a caricature of itself. Some novels apparently lend themselves to this better than others. I think you are right that Jane Austen has been adapted well far more often than most–in part perhaps because at least some of her novels lend themselves better, and in part (I bet) because those who adapt them a passionate about the originals. PERSUASION really stands out for me, as well, but I like the new P&P, too; I’ve just been re-reading the novel, and I admire how they condensed many scenes into one, and simplified the language, without losing all authenticity.

There are quite a few adaptations that I’ve liked even if they weren’t perfect. Recently I enjoyed BRIGHT YOUNG THINGS, based on Evelyn Waugh’s VILE BODIES (I can understand why they changed the title!), though it was not as bleak and unhappy as the original. I also very much liked MASTER AND COMMANDER: THE FAR SIDE OF THE WORLD, which I thought was an extraordinary film as well as being an extraordinary adaptation.

Because the difficulties are much lower than with novels, some very successful adaptations have been made from plays and short stories. There are quite a few excellent Shakespeare films (though you will always find those who like or dislike their interpretations). THE DUELLISTS (which we watched recently) is based on a Conrad short story (which, in turn, was based on actual events).

I’m excited about seeing the TRISTRAM SHANDY, Megan, and grateful to you for this topic. In fact, since I began to blog a few weeks ago, I’d been thinking of that book, even before you mentioned it. Nothing like blogging to torture the mind with conflicting timeframes — the blog never catching up with reality and somehow thereby always changing it. I should think such a thing would be interesting to a physicist as well.

I just read a review of TRISTRAM SHANDY on Friday, and can’t wait to see it! It sounds like just the sort of odd, quirky movie I like best. 🙂

I agree that the Jane Austen books seem to lend themselves well to adaptation (aside from that odd Mansfield Park, which I guess was “someone’s” idea of the story, LOL). Persuasion captures the sweet-sad tone of the book so perfectly, and the people and clothes and houses look “real”. I’m drawing a blank on the rest at the moment, though I know I’ve seen dozens of costume epics/adaptations. (Just saw The New World this weekend, not an adaptation, but definitely a costume epic!)

Now my own list of see-someday movies has expanded!

One that I do remember that hasn’t been mentioned is the A&E version of Lorna Doone. I enjoyed it, from what I recall it was a fair adaptation of the book (I am not a purist about these things).

But it’s a time period I know less about, so I’m not sure how well the details were captured. I know someone who said they over-romanticized the setting, but that person was rather hyper-critical.
Like Cara, I don’t mind if they soften things a bit.