What a sad reflection on everyday life, or at least everyday life with the Riskies…fairy princesses yesterday, pigs today. In my tradition of eloquently bringing down the tone, I thought we should take a look at farm animals of the regency or earlier, and I’m unapologetically concentrating on pigs. Like my hero Adam in Dedication, I’m quite fond of pigs. They do spend a lot of time squelching in mud and making disgusting noises, but they are very intelligent and can be quite friendly. Did you know that if you scratch a pig’s back, its hind legs will give way and it will collapse in a pleasured heap? They can also be extremely aggressive (in an earlier version of Dedication, the villain was attacked and eaten, all except for his watch, by Adam’s pigs). It’s remarkable that creatures bred for centuries to be eaten can have so much personality and smarts.

In 1807, Mr. Richard and Mr. Edward Toomer trained a pig as a retriever in the New Forest (honestly, this is true). She was named Slut for her fondness for wallowing in mud, and excelled at her vocation: When called to go out shooting she would come home off the forest at full stretch, and be as elevated as a dog upone being shown the gun. (By the way, I do not recommend doing a Google seach for “pig hunt slut.” The results are not for the faint of heart.)

There’s a lot of interest in England in saving old breeds and here are some pics of some of these porcine beauties: from left to right, the Old Black, the Gloucester Old Spotted, and the British Saddleback. Most original British breeds are actually not that ancient–they derive from the great interest in agriculture of the eighteenth century, when pigs from the near east were imported to improve native species. Despite their limited gene pool, these “heirloom” pigs are resistant to modern pig diseases and also have better maternal instincts (which probably translates as being less likely to eat, or squash, their offspring) than their factory-farmed cousins.

In my pig research, I also discovered that the wild boar, sus scrofa, extinct for three centuries, is making a comeback in England. I don’t know how specifically British the species is, since they are imported boars who escaped and are now surprising picnickers and annoying farmers. Both James I and Charles I were among those who attempted to re-introduce boars, for hunting purposes, with mixed success: not only will boars root where they please, but they taste good. Here’s a close up of the tusks of a two-year-old male. 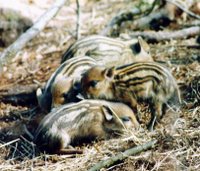 Despite the aggressive mouth furniture of the adults, though, you have to admit the babies are adorable. Aaaaw!

Any other good Regency pig tales? The only example I can think of is Mr. Knightley giving Miss Bates a joint of pork in good neighborly fashion.

Hi Janet! Perfect topic for me since I just finished Dedication and laughed more than once at Adam’s constant worrying about how his pigs were doing in his absence! Such a good read! Thanks, Riskies for offering such goodies at the blog party!

That being said, the first pig that comes to mind is the very noticeably male pig in the latest film version of Pride and Prejudice.

On the farm animal theme, there is the very memorable goat in Eloisa James A Wild Pursuit that eats the h/h’s clothing after a particularly steamy outdoors scene…

Is your pig post in honor of GroundHOG Day?
I have to say I’ve liked pigs since Charlotte’s Web.

Given that I have been reading quite a bit of Wodehouse of late, when I think ‘pig’, I think of the Empress of Blandings, silver medalist (three times, I think) and the apple of Lord Emsworth’s eye……and of course, I also loved the cute, little piglet in the movie ‘Babe’…

Pigs are great. As are ducks. Has anyone noticed how many Trickster-type characters are ducks–Daffy, Donald, the duck in CLICK, CLACK, MOO and GIGGLE, GIGGLE, QUACK and the one in DUCK ON A BIKE (one of my fave kids’ books).

Back to pigs, I’m remembering the scene in SYLVESTER where the characters are holed up by snow in a small inn. The landlady’s incredibly impressed that Sylvester is a duke and plans to kill a pig to feed him and the others. Sylvester’s prays the roads open back up before they get to the “chitterlings”.

Amanda, glad you liked Dedication! No, my post wasn’t in honor of groundhog day, tho I did think of trying to find the regency equivalent (now that’s mind boggling. Reminds me of the impeccably-researched medieval mystery I threw against the wall after the description of the chipmunks frolicking in the abbey grounds. Anyway…).
Janet

Chitterlings, really, Elena? I’m always fascinated when some word (or of course song) that I think of as southern US turns out to be British.

I would have loved to read about a villain-eating pig…. 🙂

Yes, the word “chitterlings” was used, so it must have originated in Britain. From what I remember (I happened to have loaned my copy of the book to a friend) neither Sylvester nor the heroine, Phoebe, were quite sure what they were. I don’t think I’ll be putting them on any of my characters’ tables anytime soon, but who knows?

Huh! I was once viciously attacked by a Vietnamese Pot-bellied Pig! And I can well believe that if there had been more than one of them, not even my watch would have survived!

Don’t know if any of you have seen the Lloyd Weber musical BY JEEVES, but one of the songs contains the following immortal lyrics about a pig: “Careful, girls, all stand back/He may try to attack…/It’s a well known fact that they hunt as a pack!”

I have always thought that boar hunting made a lot more sense that fox hunting, as well as being more sporting–after all, the fox is unlikely to turn the tables and gore you. Though now I think about it, that may explain why fox hunting has continued to the present while boar hunting has not.