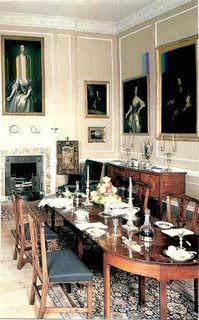 Last week I talked about one of my favorite winter pastimes–climbing under the electric blanket and watching movies until it’s spring again. This week, my #2 winter favorite–eating! Regency-style (sort of).

I’m not much of a cook. I just don’t have the patience for it, beyond stuff like omelettes and pasta carbonara. But I love to eat (and I’m sure my hips will love me for it, come May and sundress time!). And, if you look at portraits of people like our friend Prinny, obviously people in the Regency shared my appreciation for yummy cuisine.

Regency dinner parties were quite different from my own, of course. No bagged Caesar salads and boxes from the Mandarin Wok. Louis XIV’s court at Versailles (no slouch in the dining department) established the custom of dining “a la francaise”, i.e. all the different dishes at each course were placed on the table at the same time. Diners could then help themselves (or let footmen help them) to whatever was nearby. I imagine this would mean that the guests couldn’t sample all the dishes, so you would have to be sure an interesting selection was near each guest. It would be terrible if your favorite was waaay down the table! In France, important feasts could include up to eight courses (including my favorite, dessert), and last many hours. In England, it seems that even very formal dinners were usually in three courses (also including dessert!), after which ladies could retire to the drawing room for tea and gossip, and the men could remain behind for drinking.

But even the abbreviated courses meant dinner could last hours. In 1829, in a book titled “Apician Morsels”, the author wrote, “Five hours at dinner table are a reasonable latitude when the company is numerous and no lack of good cheer.” In “The Experienced English Housekeeper” (1769), Elizabeth Raffald pointed out “As many dishes as you have in one course, so many baskets or plates your dessert must have, and as my bill of fare is twenty-five to each course, so must your dessert be of the same number and set out in the same number.” Thus making 75 dishes. At a party in 1767, Sir William Lowther offered 180 dishes at his home in York.

The first course usually consisted of soups and stews, vegetables and boiled fish and meats, followed by “remove” dishes of more fish or meat. The second course sounds similar to me–vegetables, meats, fish, with exotic pies and other savory baked fare like “gumballs” and “cheese wigs.” (FYI, gumballs were made from eggs, flour, sugar, butter, mace, aniseed, and caraway seeds mixed together in a paste, then baked. Cheese wigs–er, I’m not entirely sure. Maybe another Risky can enlighten us!). Dessert was then the crowning glory. In 1750, Horace Walpole wrote “All the geniuses of the age are employed in designing new plans for dessert.” At a party given by the Duke and Duchess of Norfolk in 1756, dessert was “a Beautiful Park, round the edge was a Plantation of Flowering Shrubs, and in the middle a Fine piece of water with Dolphins Spouting out water.” Beats a carton of Hagen Dazs Dulce de Leche, I guess. đź™‚

A very large household could employ their own confectioner, but smaller households would usually make use of independent chefs. In 1763, Viscount Fairfax held a party for 18 people, and the invoice for dessert (provided by William Baker) was 16 pounds, which included the rental of the glass structures necessary to display the dessert.

I recently came across a slightly modified recipe for Hedgehog Cake, which I may (or may not) attempt soon. Cake and custard, ummmmm. (If you’d like the recipe, just let me know!)

Hopefully winter will be over soon!