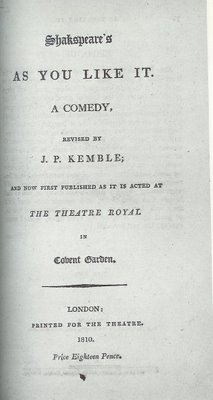 My only real hobby — besides reading books, buying books, going to libraries, buying more books, wishing I had time to read them, trying to find room to store all my books (all of which is not a hobby, after all, but an obsession, or, if I stretch things a bit, a part of my career and therefore all of it quite necessary) — sorry, where was I? Oh yes . . .

As I was saying (or trying to say, before my book habit got in the way, as it always does) — as I was saying, my only real hobby is acting. I particularly love Shakespeare. At the moment, my husband and I are in a production of Shakespeare’s comedy As You Like It at Caltech. I’m playing Celia, the Duke’s daughter who runs away to the Forest of Arden, and Todd plays Oliver, a villain who reforms and (coincidentally) falls in love with Celia.

Now that I have my lines memorized (and there are a lot of them — Celia is quite a nice role) — I can read John Philip Kemble’s version of the play and tell immediately which lines he cut, and which words he changed. Quite fun! 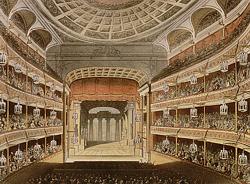 Kemble was in charge of the Theatre Royal Covent Garden before and during the Regency, and he was one of its top actors too. He was most respected as an actor when playing tragic roles, particularly noble Romans, but he also appeared in comedies. When he was young, he sometimes played Orlando — and when he got a bit older, he often played the melancholy Jaques (who has the famous speech “All the world’s a stage . . .”)

Mrs. Jordan, nowadays better known as the long-time mistress of the Duke of Clarence (one of King George III’s sons, who later became King William IV) and the mother of many of his children, was the most popular comedic actress of the time. She frequently played Rosalind, but by the Regency proper was too old — and too large — to play a young lady who disguised herself as a boy. 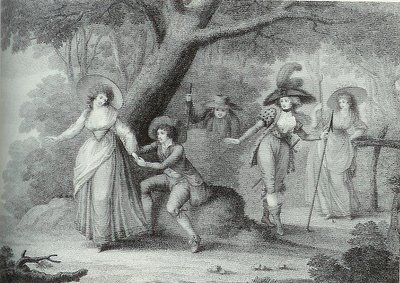 Then again, if you look at the engraving here by Bunbury, you will see that even when she was young, the lovely Mrs. Jordan did not possess what we would call a “boyish figure.” Indeed, one can tell from the way the artist drew her that seeing her curvaceous figure in men’s revealing clothing was something that the men found quite pleasing…and so few of the men would have likely complained that the delicious Rosalind would never have passed for a boy with that shape…

Next week, I’ll talk about Kemble’s version of the play — and which lines were too naughty (and which weren’t) for Regency audiences . . .

So Cara, why would Kemble change the lines anyway? Was it to make it less naughty? Or just because he felt like it?

And good luck to you guys in the new production. Sounds like fun!

Well, I’ll go over the changes a bit more next week… But the short version is, certain things were changed to suit the tastes of the time, or the actors. Certain things were cut because they were obscure or for length. But Kemble’s versions are really quite close to Shakespeare’s . . . nothing like the mid-18th century versions in which Shakespeare was whacked at, hacked up, and totally gutted. 🙂

I’m so jealous that you’re in As You Like It! I used to do stuff with our local Shakespeare group, and in college, and always thought Rosalind would be a part I would love to attempt. Not that I could actually fool anyone into thinking I was a boy, but that’s what suspension of disbelief is for, right? 🙂

The disturbing thing is that I keep hearing Cara’s voice coming from odd corners of the house. “Is she on the phone?” I wonder. “Is she trying to talk to me? What on earth is she saying?” But then I realize: she’s just practicing her lines. Again.

I agree that Rosalind is a brilliant part, Ammanda — but even if I’d dieted down to a little slip of a thing, I’d always still have hips, so it would have been a stretch for me (no pun intended)… 🙂 So I went for Celia, who’s also a great part, and apparently my hips were okay for Celia, who never pretends to be a boy!

Of course, if I’d lived during the Regency, my hips would apparently have been fine! 🙂 (I could now add a bad pun, such as “hip hip hurray” — but I won’t.)

As for the naughty bits that Ammanda can’t wait for — my, some of us are impatient! Well, I’ll give you all just a taste…

In the original, Celia is teasing Rosalind by withholding the name of the man who is writing love poetry about Rosalind and posting the poems on all the trees in the forest.

ROSALIND: I prithee take the cork out of thy mouth, that I may drink thy tidings.
CELIA: So you may put a man in your belly?

In the Kemble version, Celia’s line was cut. The sexual joke may have been too warm, and the word “belly” was certainly too crude. (They really didn’t like that sort of word then.)

And do you know I had a dream a few days ago that somehow I was watching you and Todd in a play?

Wish I could see this one. Best of luck with it!