Time to clear the literary palate…I was brought up in England, so I read some peculiarly English things–for instance, much Enid Blyton, the bane of teachers and parents for her awful and clunky prose, overuse of exclamation points (!!) and general idiocy, but beloved by many generations of English kids. I was a big admirer of the Famous Five series, starring Julian (older brother), Dick (fairly useless younger brother), Anne (their sister, a girly girl), their cousin George and her dog Timmy. George, aka Georgina, really really wanted to be a boy and I think she was destined to have some problems later on in life. The Five, in a fantasy world of endless school holidays, spent their time tracking down Evil Foreigners/Criminals who were doing Dastardly Deeds (usually involving the kidnapping of a geeky sort of scientist for his Big Secrets). Fab stuff. At a tender age I did some math and figured out, that counting three school holidays a year, the Famous Five were well into their 30s (and Timmy must have been a doddering canine geriatric), but they hadn’t aged a bit. Just as well, for George’s sake. 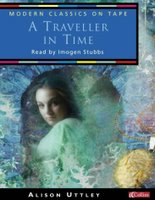 That’s the low end of the pile. How about the good stuff? One outstanding book is A Traveller in Time by Alison Uttley, one of the best time-travel stories I’ve ever read. It’s about a young girl who, when visiting her family in the country, goes back in time to become involved in the Babbington plot to overthrow Elizabeth I and put Mary Queen of Scots on the throne. It is a wonderfully dreamy and evocative book with a great use of language and historical detail, and the time travel details are absolutely convincing.

Another writer whose stuff I occasionally dip into now is Rosemary Sutcliffe, who wrote historical novels, concentrating mainly on the Roman-British occupation, and the period after the departure of the Roman legions from Britain. She’s another writer who created a vivid and believable world–you know she’s making stuff up but it feels absolutely right.

I could, but won’t, write a whole blog entry on Edith Nesbit, socialist, feminist, author, whose most famous book in the US is The Railway Children. I was fascinated by the adventures of children in the late Victorian period–even in the books that feature fantasy and magic, it was the ordinary fabric of everyday life that I found the most interesting. The Railway Children was made into a movie starring Jennie Agutter as its heroine Bobbie (another girl who wanted to be a boy but not as adamantly as George), and she starred as the children’s mother in a more recent version made by the BBC. A wonderful, major tearjerker. 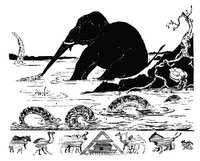 And then there’s Rudyard Kipling. Yes, I know he was a racist, sexist misogynous product of his times, but boy, could that gent write. I feel an immediate kinship with anyone who knows what I’m talking about when I mutter the great, grey greasy Limpopo River or I am the Cat who walks by himself and all places are alike to me–both quotes from the Just-So Stories. Check out the lovely art-deco style illustrations by Kipling himself–here, the Elephant’s child is discovering what the crocodile has for dinner.

So, what did you read when you were a kid?

Hey, Janet, I did a post on that very topic on the Wet Noodle Posse blog, but I totally forgot about Enid Blyton’s books!

Did you read those too?

I read Andrew Lang’s Fairy Books–all 12 of them, over and over again. And the Narnia Chronicles, and Agatha Christie and anything else I could find. But mostly Lang and Lewis, two British academics.

I read as many of Louisa May Alcott’s books I could get my hands on: Little Women, Little Men, Jo’s Boys, Rose in Bloom…also read Nancy Drew addictively…which were a gateway drug for Agatha Christie…

Was a big Beverly Cleary fan–Henry and Ribsy, Beezus and Ramona, Ramona the Pest, The Mouse and the Motorcycle…

Loved all the Anne of Green Gables books but those were in my pre-teens. Sigh, Gilbert Blyth is so dreamy…

Cool…this is such a fun topic, Janet…I too grew up reading a LOT of Blyton. I always fancied myself being the tom-boyish George (I don’t remember if I had an imaginary dog, but I had an imaginary pony named ‘bluebell’ :-)), and was part of ‘the secret six’. I don’t know why Enid Blyton mostly chose odd-numbers – ‘the famous five’, ‘the five find-outers’, ‘the secret seven’…come to think of it, I actually liked the ‘secret’ series which had a foursome – Peg, Mike, Nora and Jack (a prince), because these books had such lovely names – ‘The Secret of Moon Castle’, ‘The Secret of Killimoon’…Unfortunately, these are out of print now 🙁

I loved the Grimm and Hans Christian Andersen fairy tales, and other collections of fables and folktales. I particularly remember being fond of Norwegian folktales. These were about the Gods – the all powerful Odin (also known as Woden), his wife Frigga, their sons Thor and Baldur, Loki- the trickster…(I do feel that Rowling has borrowed more than a couple of ideas from these tales. For instance, The Arabian Nights has a story in which the life of an evil magician is hidden in a parrot; this was probably how Rowling came up with the idea of ‘horcruxes’. Sorry, I just had to tell this…grrr… I was a huge Potter fan myself, until the fifth book came out. Reading ‘the Hobbit’ and ‘The Lord of the Rings’ soon after, led me to drop out of the Potter fan club)

The Wind in the Willows, Charles and Mary Lamb’s ‘Tales from Shakespeare’, Charlie and the chocolate factory, Little women, Anne of Green Gables (Yes, mandacoll, I loved the series too…I have re-read them several times, but it’s like reading poetry…everthing appears fresh and musical each time :-)) are some of my other favourites..

Oh Megan, I loved those Lang Fairy Books–now that you have reminded me, I must track them down for my kids!

As for the rest, a lot of what’s been mentioned: the Chronicles of Narnia, Little Women and the rest, the Anne of Green Gables series, etc…

Also Madeleine L’Engle’s books. Unfortunately my oldest found A Wrinkle in Time disturbing. I guess it can be in a way, but I remember it being very powerful, too.

Nikolai Nosov’s- ‘The adventures of Dunno and his friends’, used to be one of my favourite books. It can be accessed online at –

A list of everything I loved to read as a kid would take up far too much space. 🙂

Some of the highlights, just listing the author to save time, in approximate chronological order of when I started reading the author:

And those are just the authors I was really passionate about. 🙂

Well, when I was a kid, I pretty much only astronomy/space books. Although if anyone asks, my favorite book was one from Reading Rainbow, Miss Nelson is Back. Now, it’s space/physics/astronomy/astrophysics (that’s my major, by the way) and (mostly historical) romances.

So the short answer to the question is Space, the Final Frontier stuff. 🙂 And I don’t remember what I called my favorite book, but I did prize my book written by Sally Ride. Still have that one. 🙂

Loved the Enid Blyton books! My favourites were the Magic Faraway Tree and the Adventures of the Wishing Chair. I guess I liked the idea of going to new lands a lot!

I read many of the books already mentioned here–Alcott, Anne of Green Gables, Tolkien, Agatha Christie (also after the gateway drug of Nancy Drew!). Frances Hodgson Burnett. And I adored the “Shoe” books by Noel Streatfield, especially Ballet Shoes (I devoured anything about ballet). Too many to remember.

Elena, I’d forgotten about Madeline L’Engle. I liked the series about the dolphins better than the Wrinkle in Time series though. Gosh, I hadn’t thought about those in years…

Glad to see so much L.M. Montgomery representation out there! I read them over and over again too, Moonlight Maiden…the Emily of New Moon books were good too!

What a fun topic!

Oh, yes, Emily of New Moon! I loved those books. I sort of “identified” with Emily more so than with Anne. But I loved them both.

What a great topic! It’s so much fun to go back down memory lane. 🙂