What everyone thinks is true… Part III 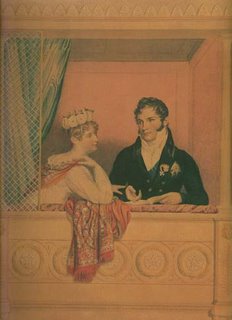 Taking a break from the pleasure of viewing athletic male bodies in tight bodysuits (isn’t men’s speed skating grand?) to do the final bit of myth-busting on the history of pregnancy and childbirth.

#4: Husbands were always excluded from the birthing chamber.

Well, yes and no. Much as my husband bemoaned the loss of the “good old days” and offered to take up smoking and pacing rather than attend me through my two labors, having the husband in the delivery room isn’t really a modern invention.

It’s true that the centuries-old childbirth traditions usually excluded males. There was a female bonding ritual associated with childbirth: closing up windows and doors, lighting candles, the drinking of caudle (a hot spiced wine or ale) by the laboring woman’s female friends and relatives. Usually the man was not welcome, but that was when births were attended by midwives.

When male practitioners were starting to get in on the act, it became inappropriate to exclude husbands. Believe it or not, some opponents of man-midwifery wrote, with great zeal, about the risks of the man-midwife becoming inflamed with passion by the sight of the laboring woman. I can just picture that, remembering what a femme fatale I must have looked during my two labors!

So husbands were not as a rule excluded from the birthing chamber. Old-fashioned female friends and relatives of the woman might complain or try to enforce the earlier ritual, but during the 18th century and into the 19th, the old rituals of childbirth were eroding, especially among the monied classes.

During Victorian times, when “chloroform-and-forceps” births became more common, the moral support provided by friends and family was increasingly replaced with medication. Doctors began to exclude any “unnecessary” persons from the birthing chamber, claiming they only distressed the patient anyway. By the time hospital births became more common (in the 1920’s and 30’s) everyone was excluded until the return to natural childbirth of our own time. And now there are some women who believe we should return to the old patterns of childbirth, with women helping women. 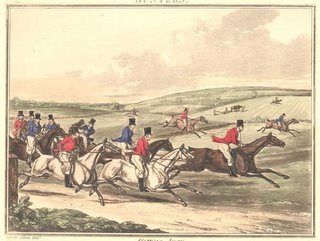 Anyway, during “our period” husbands sometimes did attend their wives. Prince Leopold was quite devoted to Princess Charlotte and attended during her 50-hour fatal ordeal. So on a happier note, it is perfectly acceptable for a proper Regency hero to attend the heroine during the birth of their child. It is equally possible that a scummy husband would go off hunting.

So who do you think about men in the delivery room? If you lived in the Regency, what might you prefer? Would you like a return to the old ritual? How would you feel about having your mother, mother-in-law, sisters, cousins, girlfriends and neighbors all there egging you on? Would it feel supportive or overwhelming? Who would you not want to have there?

And oh yes, I was modern enough to want my husband there. He does a wicked neck massage that really helped. Bucking other trends, though, I refused to do that “hee-hee-hoo-hoo” breathing. And promised my husband that anyone bringing a camera or any recording device near me before the baby and I were cleaned up would die a quick but painful death. 🙂

Well, never been in this position, nor will that be happening for a long time. . . LOL But I would definitely want my husband there, but not really sure about anyone else, might get too nerve-wracking. Don’t really know. But definitely him in the room. 🙂

I’ve always been a fan of the “go to sleep pregnant–wake up to a baby in your arms” childbirth scenario of the 50’s…Just seems less stressful for all involved.

I definitely would NOT want a host of people in there with me, rum or no rum! And I suppose my husband (who I haven’t met yet) in addition to the doctor would be all right–so long as there are no cameras of any kind involved. I’ve heard that because of the high number of malpractice suits against obstetricians, many hospitals limit what can and cannot be filmed during the birth process…

So interesting how the Victorians sexualized everything, including childbirth…

I haven’t had any children, but after watching “A Baby Story” on TLC I know this–I would never give birth in my bathtub with my whole family standing around gawking. No videos, no photos. And lots and lots of drugs. 🙂 I agree with Amanda C.–go to sleep, wake up with you very own baby! LOL

Amanda, you are so right about A Baby Story! I’m sure it’s not the intent of the producers but if anything could put one off of the idea of natural childbirth, it’s that show…

Elena – LOL re the man-midwife being struck by passion for the mother-in-labour.

Thanks for concluding this wonderful series – lots of good info!!

Great research, Elena! Thanks for sharing! 🙂

Yes, Baby Story has really put me off the whole childbirth thing! 🙂 One of the episodes had a woman having a breakdown because she had to leave her bathtub labor and go to the hosital for an emergency c-section. She kept sobbing about how she’s not a Real Woman now. Someone should tell her that if she was living in the Regency she would probably have died in that nasty tub, with some useless man-midwife standing around!!!

You know, I just love the term “man midwife.” I could say it all day.

Re the 50’s childbirth scenario, I have to admit I’m the earth-motherish type and a big advocate of going natural and also breastfeeding. Being able to nurse my babies within minutes of birth was an experience I wouldn’t trade for anything.

That is NOT to say that a woman who chooses or is forced to do things differently isn’t a good mother and isn’t going to bond with her baby.

I tried going natural the first time (ended up needing an epidural) but succeeded the second time. When I told fellow writers I was glad I experienced the sensations of childbirth as my historical heroines would have, they did think I was taking research a bit far!

I’ve eaten some foods done in period style, including a spiced beef with greenish fat (some spices do that), but pain is pretty much where I draw the line! 🙂

(I’m kidding, BTW! I know you did it for other reasons, and natural childbirth isn’t necessarily more painful than the medical kind…)