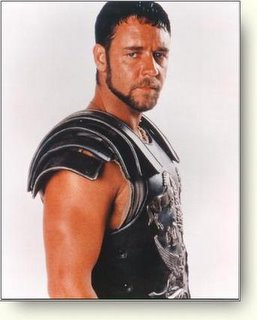 Recently, I’ve read a few too many romances where the heroine basically falls in love with the hero because he’s so hot. She doesn’t necessarily think in those words (in some of the books, she’s a Regency or Victorian or Medieval woman), but there’s not much going on between her and the hero except constant physical attraction, the desire to act on it, the desire not to act on it, the shock of acting on it, the guilt or elation of acting on it, and oh boy, those muscles! Et cetera et cetera ad infinitum…

Seems to me, if that’s all love were about, all the women in the country would be in love with Russell Crowe and would live out the rest of their lives in misery because they couldn’t have him. 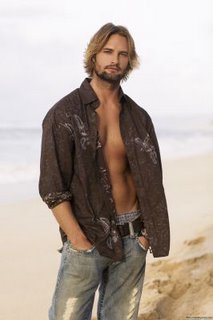 But that’s how some of these books I’ve read recently have struck me. The heroine and hero in the book have no greater emotional connection, no more true bonding, no more actual understanding of each other as human beings, than would my neighbor have with Russell.

What do I like in a romance? I like that moment when, as a reader, your heart melts. When you just love the hero to death, and want him to be happy so badly, and know the heroine can truly make him that happy, and he her as well. I love that moment when the hero does something that’s so kind, or so true, or so real, that your brain and heart shout YES!!! Yes, that’s it. That’s love. 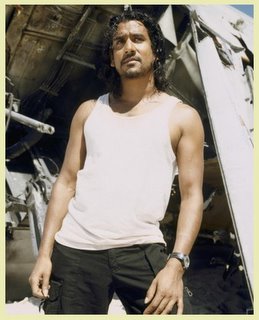 After all, what’s to stop my neighbor from changing her taste to Antonio Banderas, or Josh Holloway, or Naveen Andrews tomorrow? What’s inspiring about that? Sure, they’re gorgeous to look at (as these pictures prove), but I can’t really believe in a relationship based on nothing but the physical. The way I see it, that’s not a relationship . . . and it just isn’t that interesting to read about.

Recently, I was watching the TV show House, in which the seriously cranky Doctor House (the inimitable Hugh Laurie) was hoping that his old flame, Stacy (Sela Ward) would come back to him (despite his unending bad temper, and an ego the size of the national debt). And suddenly, there was one of those moments. The two were waiting in an airport on business for a delayed flight, and when Stacy sat down, she found that House had gotten her a cup of coffee… And not just any coffee, but the kind she liked, done the way she liked…

That little moment, showing that even years after their relationship ended, he cared enough about her to remember how she liked her coffee, and the casual, comfortable way he got it for her without any show or fuss, really melted my heart.

So… What moment in a book, TV show, or movie melted your heart? Is there a scene where a character’s action really touched you? How about something a character said? Or a moment or moments that made you want to shout, Yes! That’s it! That’s love.

Besides essential hotness, what I think is the most moving is when the hero does something truly generous he never expects the heroine to find out about–and when she does, and talks to him about it, he brushes it off as if it weren’t a sacrifice at all, but of course it is. Sigh.

Hmmm, well one movie example I can come up with is in Lady Jane, when Guildford goes to Jane their first night in their house and just talks to her, really wants to understand her. It’s then he finally realizes that she’s no more happy than he but him brooding isn’t going to help. Helping her can. At that point their relationship changes. And I melted.

Of course, it’s likely not even close to being historically accurate, but at that point, I didn’t care.

And I’m with you over needing more from a romance than just the hero and heroine finding each other hot.

To me, essential hotness requires more than just muscles. I want brains and soul in my heroes. I also believe that sometimes the instant physical attraction is like the body’s recognition of the love that is going to develop.

Any books that unnaturally segregate the mind/body/soul don’t work for me. This includes romances where the sex feels forced into the story too early. Also the two inspirational romances I’ve read (apologies if there are any inspirational romance fans reading this) because they implied one only *feels* physical attraction once one is married. I can respect characters who wait to act on it, but can’t believe in characters who don’t feel it until they say “I do”.

Now I see I have jumped up on a soapbox and not answered Cara’s question! I agree with Megan and Tess about their melting moments. Another one, for me, is when a rakish hero who’s had loads of experience shows some vulnerability when making love to the heroine for the first time, when he realizes this is different even if he doesn’t know or admit why.

Since this is fantasy, I like a hero who can apologize.

Yay for that, Janet. Certainly the pivotal moment in my Almost a Gentleman is when David says “you were right and I was wrong.” I blundered into that line at my job some 20 years ago — I had been so sure I was right about something, when I realized I had it diametrically wrong, I blurted it out and the up-until-then angry other party became my pal for life. Wow, I thought, I’m onto something.

Mostly, though, I work along the lines of what Tess was saying. For me the moment is a moment of recognition. You know that the other person SEES you, as well or even better than you see yourself (the “better” part can be a bit painful). I agree with Elena that the body may do this before the mind. I like to put my characters in disguise, for the pleasure of the other lover seeing through the disguise — naturally, effortlessly. In The Bookseller’s Daughter, Marie-Laure deconstructs Joseph’s novel (well, she’s French, she can’t help it).

I also like the Trust Moment — Pride and Prejudice hinges (almost at its middle page) on Darcy trusting Elizabeth with his confidence about his sister and Wickham. An almost perfect confluence of emotional shift and plot turn.

I like to write bookish, cerebral characters because recognition games can bounce around their mutual appreciation and understanding of what they’re reading. I like to feel a sense that they could build an imaginative world to live in together (but that’s just my write-what-you-know self speaking).

I always have serious doubts concerning the viability of HEA for such characters–what happens when they get old and pudgy? 🙂

Old and pudgy like MOI? We do just fine, Amanda, and so will my characters (Marie-Laure never quite lost her pregnancy belly, you know)

But to put it less personally, I do like to imagine love and intimacy as outlasting the externals. That is a part of the fantasy for me and I try to show some sense of the body as being fragile and subsceptable to time as part of that fantasy. No botoxed love.

Yes!!!! I totally agree. Occasionally I see a couple that’s been married for decades, and the husband treats the wife terribly… And the husband is also ignorant and stupid and stubborn, and I think, why’d she marry him? Well, maybe he was hot twenty years ago! 🙂

And Elena, I agree that attraction is also influenced by other factors. The books that have an attraction only based on biceps and legs isn’t nearly as emotional, or as sexy, as an attraction that’s also based on the characters’ personalities… I mean, think of the sizzling attraction between the main characters in “His Girl Friday” — only a tiny fraction of it is because the actors are good-looking!

And think how much more attractive Darcy is by the end of the novel… Or how poor Freddy in Heyer’s “Cotillion” is so undesirable at the beginning, but melts your heart by the end! And the time he saves Kitty from embarrassment — that’s a wonderful scene. Definitely a “moment.”

Oh, Cotillion! That was my first Heyer… and I so loved Freddy by the end…

I love that moment in Persuasion when Anne is tired from their walk and Captain Wentworth suggests that Anne should be the one to ride in the carriage with the Crofts. It’s bittersweet because he’s sending her away, but she *is* tired and he notices and wants her to be comfortable.

And another moment I love in “Persuasion” is when Wentworth insists that Anne would be the best nurse. Even when he’s still sore at her, he admits her worth!

Tee hee! I wasn’t thinking of the true-love couples when they are older and grayer and still in love (which is what everyone wants). I was thinking more of the heroine in love only with the Russell Crowe muscles. If that’s all there is, what happens when it’s gone? 🙂

I fall in love with the hero through looks and attitude, yes. But also it is the heart- the vulnerability and hopes and fears. I like the Hot Alpha male but I also need to see that he is a living breathing human being. Everybody wants love. Period. It can show up in many forms- not just romantic love- but everyone wants to love and feel loved. I want to see this in the hero.

I am a total sucker for “That Moment”. Isn’t that why we read romance? It is when the hero and heroin see each other as no one else can. They see through each other. This can show up as an action, or even just a look, or a smile. Maybe that moment can be called the “I know who you really are” moment. It was really well portrayed in the recent P+P movie when Elizabeth and Mr. Darcey argue in the rain and almost kiss. Sigh.

I LOVE that scene in P&P. It was really beautiful and so tense and passionate.

BTW, went to try and buy my DVD this morning, and they were OUT. Waaah!

I’d just like to say, Cara can put all the beefcake she wants on her blog posts, and I am not the least bit threatened. So there.

But I agree–physical attraction can start the ball rolling, but Happily Ever After needs a heck of a lot more than that.