Round and about the weather 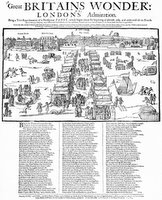 Originally this was going to be a post about weather during the Regency weather, something I was determined to blog about before the official arrival of spring, although here (near Washington DC) it’s warm and sunny and daffodils are blooming. I did however do some digressions, some of which turned out to be more interesting.

England in Jane Austen’s time was in the grip of a minor Ice Age that had begun in medieval times and lasted up until the mid-nineteenth century–hence the snowy cold winters of A Christmas Carol and the Pickwick Papers. It was cold enough for the river Thames to freeze over completely, which it did for several months in some particularly cold years. In the sixteenth century Henry VIII traveled from London to Greenwich along the Thames by sleigh. What better opportunity for the enterprising merchants of London to set up shop on the river, thus creating Frost Fairs, the most famous of which (featured in Orlando by Virginia Woolf) was held in 1608

The Frost Fair of 1814 was the last of its kind, and featured an elephant being led across the ice near Blackfriars Bridge (according to one source I found), donkey rides, and the roasting of a whole sheep on the ice. People had to pay to see the sheep roasted and then pay for a portion of “Lapland Sheep.” Nine printing presses churned out souvenir items. This fair only lasted four days until a thaw set in.

The weather, of course, is always a safe conversation topic–particularly if the man of your dreams has appeared unexpectedly:

But it was then too late, and with a countenance meaning to be open, she sat down again and talked of the weather.

That’s Elinor, from Sense and Sensibility, whose keen sense of the appropriate phrase gives her a certain affinity with Jim’s aunt in A Child’s Christmas in Wales by Dylan Thomas: 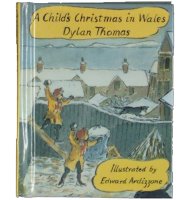 And when the firemen turned off the hose and were standing in the wet, smoky room, Jim’s Aunt, Miss Prothero, came downstairs and peered in at them. Jim and I waited, very quietly, to hear what she would say to them. She said the right thing, always. She looked at the three tall firemen in their shining helmets, standing among the smoke and cinders and dissolving snowballs, and she said, “Would you like anything to read?”

I have to mention a couple of fascinating sites I came across while trying to find a good Jane Austen quote about the weather (the one I was originally looking for, about a stupendously cold snap in London, is in Emma, I think). There is for your edification, a site with a search function for Sense and Sensibility, and other books too, Tilneys and Trap-doors, and that site also includes the Henry Tilney Fan Site–yes, the man who knows how to wash muslin. Who would’ve thought it.

Well, a good time waster is always weather.com, of course. LOL 🙂 It’s funny though, I remember seeing something somewhere about the whole little Ice Age, and I just finished a book where they are talking about the Thames being frozen over. This was really perfect timing! 🙂

Lois, maybe you saw the same documentary I did, on the Discovery Channel (I think). Some things I found fascinating:

There’s a theory that the exceptional sound of Stradivarius violins may be related to the slow and dense growth of trees during the Little Ice Age.

England and other northern countries used to grow wine grapes but changed over to more beer brewing during this time. Since most early immigrants to the US were from these countries, one could say the Little Ice Age is the reason beer is more popular here than wine.

I can only imagine how awful the Year Without a Summer must have been for those whose crops failed as a result. Without knowing the cause, they might have feared it was a permanent climate change, the wrath of God or whatever. If something like that happened now, at least we’d know why.

More bad regency weather (courtesy of my recent researches) : The Tambora Volcano in Indonesia had a huge eruption in 1815, sending so much ash or soot into the atmosphere that it cooled down the air in western Europe and America in 1816. There was snow on the ground in June in England in 1816, which didn’t do much for the harvest; the resulting food riots which led to much official displeasure and domestic espionage.

Not only that, English majors, but it was the cause of the bad weather that kept Mary Shelley and company were indoors writing their ghost stories that summer.

There’s an extraordinary apocalyptic poem by Lord Byron, also inspired by the dark air. Here’s a link for cutting and pasting: http://www.strickling.net/byron_darkness.htm

I love the way that weather drives plot in many of Austen’s novels: the rain storm in which Marianne twists her ankle in S&S; the constant rain in Bath that seems to punctuate Anne’s dislike for the city Persuasion; the snow in Emma when she is forced to ride in the carriage with Mr. Elton.

Coincidentally to this blog, I’ve been reading The Weather Warden series by Rachel Caine this week, and though these are contemporary and more akin to Janet Evanovich meets Harry Potter than to Jane Austen, it is fascinating to contemplate people contolling the weather. Especially in this time of global warming and with hurricane season fast approaching. If you’re interested in weather and smoking hot djinn, this series is worth a try;) And since this seems to be a thriving new subgenre, maybe it’s time for a Regency based paranormal series on people who can control the weather…