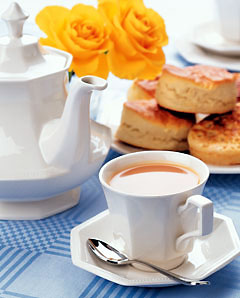 William Cobbett, round about 1821, wrote:

The drink, which has come to supply the place of beer has, in general, been tea. It is notorious, that tea has no useful strength in it; that it contains nothing nutricious; that it, besides being good for nothing, has badness in it, because it is well known to produce want of sleep in many cases, and in all cases to shake and weaken the nerves.

Okay, so far, I slightly agree with Cobbett. Lack of sleep — yeah, if you drink more than you’re used to, or you drink late in the day, it can cause insomnia! But “shake and weaken the nerves”?

It is, in fact, a weaker kind of laudanum, which enlivens for a moment and deadens afterwards.

Laudanum, which is opium dissolved in alcohol, being compared to tea??? Dude, what have YOU been drinking???

It is impossible to make a fire, boil water, make the tea, drink it, wash up the things, sweep up the fire-place and put all to rights again in a less space of time, upon an average, than two hours. . . . Needs there any thing more to make us cease to wonder at seeing labourers’ children with dirty linen and holes in the heels of their stockings?

You heard it here first.

Cobbett was the definition of eccentric.

I remember reading that passage about tea. And I remember what he recommends instead.

Elena, who will drink either on the right occasion 🙂

Yes, he thought beer and ale were SO NUTRICIOUS! Health food. Probably made with whole grain, after all. Full of antioxidants. (Wait, no, that’s tea!)

The love of tea–does that explain my love of procrastination, too?

Yum, tea… (I’m at work now, starting my early afternoon nod-off, and could really use a good, strong cuppa right now!). But no laudanum. 🙂

Laudanum does sound like the foulest substance in the world. It staggers my imagination that one drop was a significant dose, but addicts might take a hundred or a thousand times that amount every day… De Quincey had a little difficulty buying laudanum in sufficient quantities — he had to convince the chemist that he was an opium addict first. (Being an addict was fine; what the chemist was worried about was that he was going to commit suicide!)

I think I’ll stick with tea. 🙂

Hmm. I may be a tea addict. If so, how much would I have to take to commit suicide? I think that may fall under the category of “death by drowning.” 🙂

Cobbett was a brilliant and fascinating man, but he was given to ranting. As well as tea, he also deplored potatoes, and bemoaned at length that they were becoming more popular than bread among country dwellers. I wish I could find the passage in the Rural Rides where he glorifies the English housewife up to her homely elbows in homely bread dough. It reminds me rather of “honey, you never look so beautiful as when you’re…cleaning the toilet…vacuuming…taking out the trash etc.”
I am however, shocked–shocked! that he should attack tea drinking, which obviously he associates with farmers’ wives and daughters getting all fancy, and sitting around in a parlor (doubtless after a meal of potatoes), thus hastening the end of civilization as he knew it.