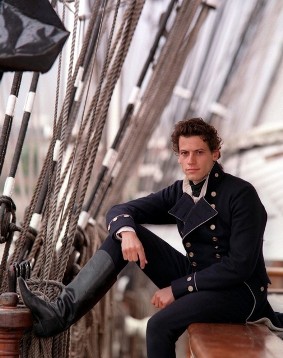 Dreadfully Important Survey here. Much more important than that census nonsense. The fate of the world hangs in the balance.

And the pictures here of handsome men are entirely relevant, and not there for any superficial, oh-aren’t-they-cute sort of reason. 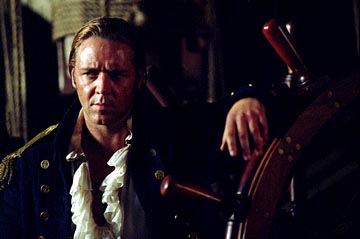 2. How about Jack Aubrey versus Captain Wentworth (as played by Ciaran Hinds)? Or would you be too afraid that Anne (as played by Amanda Root) would beat you to death with her umbrella for watching?

3. How about Wentworth versus Hornblower?

4. If the three captains actually fought, would that be like Regency mudwrestling? 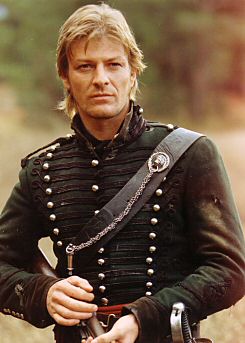 5. Would Richard Sharpe (as played by Sean Bean) be able to wipe the floor with any of them?

My money would have to be on Sharpe. All that marching here and there, carrying a heavy pack, whacking frenchmen with swords, seducing the frenchmen’s womenfolk, and trading sarcastic remarks with Sergeant Harper–I think he must be much more fit that those sailors, who (truth to tell) probably get most of their exercise from chewing on hardtack and salt beef.

And please–let them keep their shirts on!

As an interesting alternative, you could rate these gentleman In Most Need of a Bath, and Whose Back You Would Personally Scrub.
I think in the first category Aubrey and Sharpe are pretty much a tie, and Hornblower, astonishingly clean, but let every woman do her duty, is definitely the winner in the second category.
Janet

Oh, Cara, I’ve been having a miserable week. Kids sick and fighting something myself.

Thank you, I needed the Regency Hunks fix!

As far as who would win the scrap, my money’s on Sharpe, too.

As far as what I’d give to see such an event, don’t ask, because after a week of cleaning up all sorts of noxious substances off sheets and jammies I am not sure what I might say.

Yes, I think Sharpe would win, if for no other reason than that he would cheat. Aubrey I suspect also knows how to fight dirty, but he does have those few extra pounds to hold him back…. Though if it were wrestling (mud or otherwise) they would likely help, and Aubrey could just sit on Sharpe… đź™‚

I have to cast my lot with Sharpe, as well. He definitely would know more dirty tricks and while Hornblower would have youth on his side he’d play fair–which would likely get him pummeled.

As for Back Scrubbing, I wouldn’t kick any of them out of my tub;)

Sorry, Todd–shirt removal would be strongly recommended. We don’t want them to rip their precious uniforms…

Damn, I keep rooting for Hornblower, but he couldn’t possibly beat out Sharpe. Damn. Or Aubrey. Damn. Damn. Damn.

(Somehow have no interest in seeing Aubrey go toe to toe with Sharpe.)

However, since Hornblower does seem to be the less greasy of the lot, then he must be ever so much more accustomed to washing up. Helloooo! Back scrubbing girl available!!!

LOL, Cara! My money would also have to be on Sharpe (terrible odds for the rest of them, isn’t it?). I would say Aubrey, if he had a telephone, but–oh, no that would be Russell Crowe, NOT Aubrey. đź™‚ I do love Hornblower, though.

Thinking more on it… Hornblower’s buddy Archie is now Apollo on Battlestar Galactica, and he might bring some vipers to the fight. That could make Hornblower win.

Ciaran Hinds has more recently played Julius Caesar, so he could bring huge armies along. So he might win.

And of course, Russell Crowe is a mighty gladiator.

But what if Sharpe is secretly a Cylon?!!!

Oh, wait, no. When they made Todd, they broke the mold. đź™‚