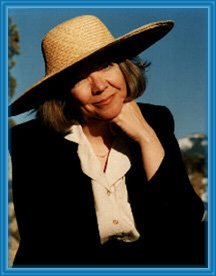 We’re thrilled to welcome Julia Ross as our guest.

Julia began writing as a child in England, where she wrote and performed plays with her cousins, to the great amusement of adult family members. She graduated from Edinburgh University, then came to the U.S. and settled in the Rocky Mountains, where she worked with her husband designing solar homes before deciding to write her first romance novel.

As Jean Ross Ewing, Julia wrote six traditional Regencies, the last of which, LOVE’S REWARD, won RWA’s RITA award in 1998. Since then, she has written seven historical romances, all of them Romantic Times Top Picks. Her latest release, GAMES OF PLEASURE, is a finalist for the 2005 Romantic Times Reviewer’s Choice Award for Best Historical Romance of the Year.

Read more about Julia and her books at www.juliaross.net. 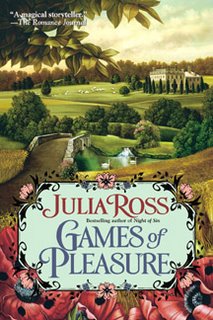 Praise for Julia Ross and GAMES OF PLEASURE

“An exceptional writer who creates rich, compelling characters in tales of intrigue.” – The Oakland Press

“One of the most powerful voices in historical romance.” – Mary Jo Putney

“The journey is intriguing, sometimes dangerous, and filled with all the lush sensuality Ross’s readers have come to expect. A resourceful heroine with a past and an honorable, complex hero who is trying to avoid his proscribed future find passion and an unexpected destiny in this emotionally involving story.”
– Library Journal

Thanks for the welcome! I’m truly delighted to be here, and I love the name “Risky Regencies,” because the truth is that my short Regencies were never very “traditional” to start with. I’ve always adored romances filled with dangerous adventures and high emotional stakes, which is why I switched to historicals eight years ago. The longer format lets me develop more complex stories and delve deeper into my characters’ emotions. Also, since my historical romances are far more explicit, the sexual dynamics can be a much bigger part of the story, essential to a conflict that’s truly fundamental to the characters.

Q. Your stories have had late Georgian, Regency and slightly post-Regency settings. How did you become interested in these time periods? What do you like best (or least) about them?

The period from 1760 to 1820 has always enchanted me. I grew up in a Georgian house in the English countryside, so it wasn’t hard to imagine that past. Life for the upper classes was both more elegant and less certain than our lives are today, but the setting was wonderfully romantic — the green countryside, the great houses, the new towns. I love it that no one could travel faster than the fastest horse, and honor and gallantry were still truly meaningful concepts. And men have never looked sexier! 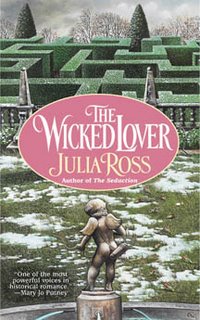 For the earlier Georgian period (the setting for THE SEDUCTION and THE WICKED LOVER), there was such a great contrast between the rich, flamboyant clothes and the very masculine, dangerous men who wore them. Secure in their power before the French Revolution, the aristocracy enjoyed a pretty licentious time. It’s hard to resist a hero dressed in silk and lace who never doubts his authority and knows how to fight with a sword!

The Regency period was a little more restrained and elegant, but the Wyldshay Trilogy (starting with NIGHT OF SIN and GAMES OF PLEASURE) takes place in 1828-29, after Prinny became King George IV. I became fascinated by the interface between the sophistication of that late-Regency society and the burgeoning scientific exploration of a world where huge areas were still unknown. When Wild Lord Jack returns to England in NIGHT OF SIN after his dangerous travels in the far reaches of Asia, he’s still a Regency gentleman at heart. Yet he’s been profoundly changed by his experiences, and his interests are all forward-looking. Though he wants to dismiss the heroine as a typical Regency miss when he first meets her, she’s a real freethinker. They’re both outsiders, and the story wouldn’t have worked as well at any other moment in history. 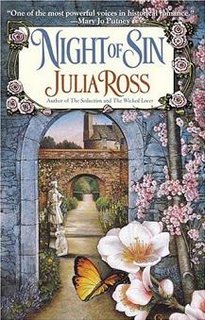 Q. Which of your books is your favorite?

Well, they’re all very different — so how can I pick favorites? Yet my most recent books are at the forefront of my thinking, so right now I’d have to choose GAMES OF PLEASURE or NIGHT OF SIN, though that will change when CLANDESTINE is released next November. Each of my stories is written only because what I call a “burning idea” grabbed me and simply wouldn’t let go. That “burning idea” is different each time, yet it always involves plenty of built-in excitement and conflict. Then I fall in love with my hero and can’t wait to see what happens next. So the book I’ve most recently finished always becomes the favorite of the moment — until I go back to read one of my earlier books (which I often do when the stories are related) and get swept away by that one, instead!

Now that I’m a full-time author, I have little time left to read fiction: a great irony, since it was my love of historical novels that brought me to romance in the first place. Instead, whenever I get time to read, I delve pretty much at random into any history that catches my interest. Reality is always stranger than fiction, and the most apparently random tidbits often end up sparking ideas for my next story. Thus I have shelves full of interesting history books, many of which I’ve not had the chance to read yet.

Q. For the writers amongst us, what is your writing process? Are you a pantser or a plotter? Do you write multiple drafts or clean up as you go?

Alas, I’m an unrepentant “seat-of-the-pantser.” Once that “burning idea” grabs me, I just plunge in to see what happens, following my very personal, intuitive sense of what makes a great story. It’s a tough way to write a novel, because it involves lots of rewriting as I go, but almost all of my best scenes and ideas have come to me that way — and each time I must have faith that it will work once again! Luckily, my characters and plot always seem to sort themselves out in the end, almost as if the entire story was already waiting in my unconscious mind, and all I have to do is uncover it. Yet I envy the organized plotters, because I’m sure that their methods are far more efficient than mine are. But so far my messy process has carried me through fourteen novels and many awards, so I’d never dare try to change it!

Look for Part 2 of this interview next weekend!

I am so excited to see this interview with Julia Ross. Devil Dagonet still comes up in conversation between my sister and me as if he were a real person.

And I’ve adored all of her historicals–especially the Georgians, The Seduction and The Wicked Lover. There *is* something sexy about those Georgian men and Julia Ross captures that better than anybody. She also writes some of the most lyrical and beautiful prose in the genre.

I totally agree, Mandacoll — Georgian men could be SO sexy! (And I thought that even before Dangerous Liaisons!) 🙂 I think Julia Ross hits it right on the nose when she talks about the attraction in that contrast — the men in lace and embroidery and such, but SO manly, always wearing a sword etc etc…

So glad the Riskies invited you in for the interview.

I think your writing started out strong, and is getting even better. I haven’t caught up to Games of Pleasure yet, but that will be soon.

And it’s nice to hear of a successful author who’s an unredeemed pantser, too. makes me feel less chaotic.