All right — over the past week we decided that, in a fight, Sean Bean’s Richard Sharpe could clobber Russell Crowe’s Jack Aubrey, Ciaran Hinds’s Captain Wentworth, and Ioan Gruffudd’s Horatio Hornblower. (Though there were a few random votes involving Hornblower and a bubble bath — not entirely sure what those meant.) 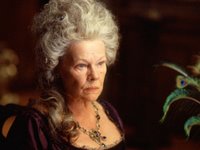 We voted unanimously that Judi Dench’s Lady Catherine De Bourgh could wipe the floor with Barbara Leigh Hunt’s Lady Catherine, break her in two like a twig, spread her on a crumpet and feed her to the pugs. 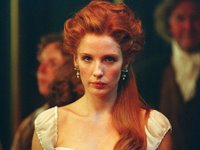 Today, we have a NEW SURVEY!

It’s called WHICH CAD WOULD WIN?,
or, THE CADS DUKE IT OUT 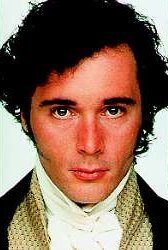 Here we have it: a boxing ring. Or a wrestling match. Or a fight to the death with toothpicks. Whatever takes your fancy. 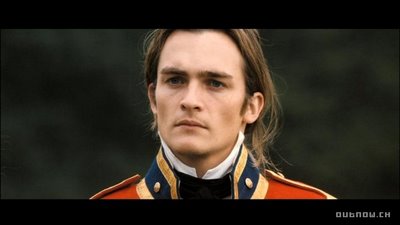 In one corner we have Greg Wise’s Willoughby, from the Ang Lee Sense and Sensibility — healthy, charming, and able to ride a white horse.

In a second corner, we have Rupert Friend’s innocent-looking Wickham, from last year’s film of Pride and Prejudice. He’s tall, gorgeous, and has a sword. Maybe he knows how to use it!

In the third corner, we have Adrian Lukis’s Wickham, from the 1995 BBC/A&E Pride and Prejudice. He’s a sly fellow, always smiling, and always up to something.

Who would YOU put your money on?

WHICH CAD WILL WIN???

I’d have to go with the 1995 P&P Wickham. He knows he’s a cad, while the others don’t seem as sure. I like confidence in my cads ( as in my men in general), and I think he could wipe the floor with the others, especially that Orlando Bloom, Jr. guy who plays Wickham in last year’s P&P.

I agree wholeheartedly, Megan! 1995 Wickham would fight dirty and would stop at nothing to win. Greg Wise’s Willougby, while in my opinion the best looking of the three, is best at seduction and jilting, and the latest Wickham just seems a little too detached from it all. But 1995 Wickham is a little bit older and wiser in his caddery…he’s definitely the type to have a knife hidden in his boot.

You know that bit in The Princess Bride, after Inigo Montoya announces himself to the Six-Fingered-Man, and Christopher Guest first stares him down, and then quickly runs away?

Unfortunately, that what I see all these guys doing.

But :whining: if I have to pick, I think I’m choosing 1995 Wickham. Sort of. I think first he’d try very, very hard to set the proposed conflict for some public tavern on Tuesday next, and then never show.

But if I were to choose, I think I’d bet on Greg Wise’s Willoughby. The new Wickham seems awfully young and…well…young. The 1995 Wickham is–well, I don’t know, he just seems kind of short compared to the other cads. 🙂

But Willoughby is very good at acting good when he’s not. Does he even know he’s a villain? I suspect he and that white horse are errant knights (very errant) in his imagination!

BTW, I originally wanted to put up pics too of William Elliot (Samuel West) of Persuasion and Frank Churchill (Ewan McGregor, a.k.a. Obi-Wan) of Emma, but I couldn’t find any good pics! And in any case, I think the three cads featured here could beat those two any day. (Though if we’d had five, we could have seen five run away all at once!) 🙂

Hmm. If we’re letting the other two guys into the contest, I have to put my money on Frank Churchill. That light saber gives him a HUGE advantage! And Frank Churchill is, at most, an equivocal cad. He certainly thinks that he’s the hero. And he does see off those pesky gypsies quite briskly.

Of course, the others would still all run away. So it wouldn’t be much of a fight.

By the way, where do all these scads of cads come from? Do they cadge a place as cadets, taught at an Academy by a cadre of former cads to calibrate their caddishness with careful cadence? Or what?

I see this differently.

Willoughby is too conflicted a villain–given the right circumstances (money) he might have done the right thing by Marianne. And though he seems the strongest physically, he might not play dirty.

The 1995 Wickham is irredeemable and would play dirty (or try to weasel out of the fight–I can definitely see that). But anyone who looks at him can tell he’s going to fight dirty so they’d be ready.

So my money’s actually on the 2005 Wickham. He looks so young and guileless, no one would suspect him of the knife in his boot, or the poison on his ring.

Hiya! I’m popping in as a sneaky preview….
I think Willoughby is more of a tragic figure than a cad – he’s weak and selfish, but not evil. As much as I loved the 2005 P&P, that Wickham (he seems whiny) can’t hold a candle to the 1995 Wickham, that smiling, sniveley cad! (I’d put Persuasion’s Elliot in a strong second place, though)
Diane

I’d have to vote for the 1995 Wickham. He is guiless with that self-deprecating smile that seems to say ‘Really ma’m, I can’t seem to help myself!’