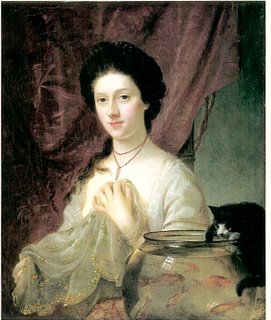 The last couple of weeks, I’ve posted on the lives of ladies-in-waiting at Court. This week, I decided to take a slightly different angle, and explore the history of another segment of female society–courtesans. (Plus, it’s a very hot day here, in the 90s, and I’m feeling very, very lazy. Just reading Megan’s post from yesterday is all the Literature I can take in right now! So I pulled up a short article I wrote for the “Regency Reader” using research from my book LADY MIDNIGHT. I have a lot more info in my notes–if anyone wants to hear more, just email me!). Here’s the article:

“A great courtesan was no mere prostitute. She was highly cultured, witty, charming, elegant, companion to the great men of her day. According to Susan Griffin, the greatest distinction between a prostitute and a courtesan was that courtesans were “personages”–celebrities who were written about in the journals and papers of their day, gossiped about for their fashions and love affairs, arbiters of tastes and trends. The greatest courtesan could use her body and her brains to enjoy the benefits of marriage, such as companionship, property, and financial stability, without the social constraints and loss of independence. It was not all positive, of course. There was little companionship with other women, and when romance soured there could be dire financial repercussions, and even physical revenge (not to mention the threat of disease). But it was often the best of a very narrow set of options.

In English polite society of the 18th and early 19th centuries, arranged marriage was the norm–husbands and even wives had great freedom in seeking their affections elsewhere, provided there were proper heirs and the partners were discreet. “One exists with one’s husband–one LIVES with one’s lover,” says the Marquise de Vandenesse in Balzac’s “Une fille d’Eve.” Thus the courtesan played a very important role in this period–not “received” in polite society, but with her own important world, the demi-monde, with its own society, etiquette, and protocol. She was paid for her personality and style, her ability to attract attention and celebrity. To show her off was a sign of prestige. To stay at the top of her game, she had to be witty, smart, independent, and charismatic, for mere prettiness was common, and soon faded.

The most famous courtesan of her day was Harriette Wilson, one of five sisters who became well-known members of the demi-rep. She was not beautiful, but she was very witty and fashionable. She and her sisters showed off in their own opera box (200 gineas a year!) and in their fancy carriages in Hyde Park. For men, to be introduced to her was the height of social success. But her stylish clothes and household were very expensive, and she fell into a debt and a bad relationship with a swindler named Rochfort (beware of men named after stinky cheeses). By the end of her career, she was in poverty in Paris, and undertook to write her Memoirs to raise some needed cash.

The Memoirs were published in twelve parts between January and April 1825, and were an immediate sensation. At the end of each installment was an advertisement giving the names of people mentioned in the next part, giving them time to buy themselves out if they hadn’t already. Harriette made about 10,000 pounds, but most of it was soon squandered by Stink Cheese Man, and she died in complete poverty on the Continent in 1845.”

Here are a few books I found helpful (and very interesting!);
Harriette Wilson’s Memoirs (my version was edited by Leslie Blanche and published in 2003)
Paula Byrne’s “Perdita” (about Prinny’s first love, actress Mary Robinson)
James Davidson’s “Courtesans and Fishcakes” (way out of “our” era, it’s about ancient Greece, but great)
Susan Griffin’s “The Book of the Courtesans”
Katie Hickman’s “Courtesans: Money, Sex and Fame in the 19th Century”
Valerie Grosvenor Myer’s “Harriette Wilson: Lady of Pleasure”
Nickie Roberts’ “Whores in History”
Margaret Rosenthal’s “The Honest Courtesan: The Life of Veronica Franco” (another one out of our period, but a terrific read, and the basis for the fab movie “Dangerous Beauty”)
Francis Wilson’s “The Courtesan’s Revenge: Harriette Wilson, the Woman Who Blackmailed the King”

I asked in my last article if you would be a good lady-in-waiting–now for something much more fun. đź™‚ Would you have been a good courtesan???