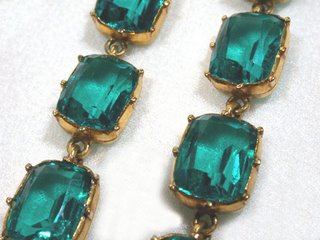 Please note our sidebar now contains all sorts of great links: Riskies’ author websites and blogs, interviews, other writers’ and readers’ blogs, review sites and delicious Regency sites in which one can lose oneself and not wish to be found again.

Thanks to everyone who has given us links from their blogs and websites. We are delighted to finally return the favor!

P.S. Kathleen Bolton and Therese Walsh at Writer Unboxed have posted the article they co-wrote with Elena on “Lessons from the Lord of the Rings”. Read it for lots of geeky analysis of what writers can learn from the choices made in adapting the trilogy for film, along with only a teensy bit of gushing over Sean, Viggo, Orlando, etc…

P.P.S. The image above is of part of a Georgian emerald paste parure at www.georgianjewelry.com. In case you have $8550 just lying around…

Elena Greene grew up reading anything she could lay her hands on, including her mother's Georgette Heyer novels. She also enjoyed writing but decided to pursue a more practical career in software engineering. Fate intervened when she was sent on a three year international assignment to England, where she was inspired to start writing romances set in the Regency. Her books have won the National Readers' Choice Award, the Desert Rose Golden Quill and the Colorado Romance Writers' Award of Excellence. Her Super Regency, LADY DEARING'S MASQUERADE, won RT Book Club's award for Best Regency Romance of 2005 and made the Kindle Top 100 list in 2011. When not writing, Elena enjoys swimming, cooking, meditation, playing the piano, volunteer work and craft projects. She lives in upstate New York with her two daughters and more yarn, wire and beads than she would like to admit.
View all posts by Elena Greene →
This entry was posted in Reading, Research, Writing and tagged Links. Bookmark the permalink.
0 0 votes
Article Rating
Subscribe
Login

I always wondered what a parure looked like…Thanks, Elena!

I just realized I messed up the link to Georgian jewelry. Fixed now.

What is interesting is that that item sold between the time I posted and this morning!

They should give you a commission!