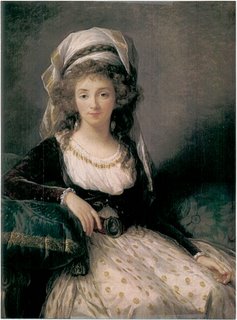 On Saturday, I partook of your charming American custom of “Mother’s Day” by attending tea at a lovely little tea shop with my hostess, her mother, and various other ladies. (My own dear, departed mother would have loved this holiday, I think–she was always in need of more face paint and bottles of scent!). It was not the same as the tea I served in my house, which my friends always declared to be superlative, but it was adequate. They had an extensive selection of fine teas (which surprised me, I must say. I deplore this “Lipton” business!), some nice little sandwiches, and a few iced cakes. In honor of this occasion, I will pass on some of my own tea wisdom, mostly gained from my own mother (who adored a lapsang souchong).

Tea was introduced to Europe during Elizabethan times, but as people then had no sense of what was good for them, it did not reach England until 1657-60. Even the barbaric Russians had it before us, and it was a Venetian named Gian Battista Ramusio who was the first European to write about the drink. (Very surprising, if you know the Venetians at all). It was at first a hard sell, until that most deplorable of monarchs (lovely taste, though) Charles II took up the habit of drinking tea all day long. It was among the least objectionable of his many habits, I fear. It was also very popular here in your own country until that unfortunate occurence called the Boston Tea Party in 1773.

Afternoon tea was not a fixed tradition in my own time (though I enjoy cakes and a refreshing sip at four o’clock as much as anyone!). Slightly later than that, or so I read now on this Intra-Net compooter, the Duchess of Bedford started ordering a tray of bread-and-butter in the afternoons, as she could not wait for the fashionable dining hour before getting a bit peckish. It worked out well for her, and she began inviting friends to join her. The bread-and-butter was soon supplemented by pastries, sandwiches, and scones. “High tea” is a different thing altogther, a full meal served around six for the lower classes, consisting of meats, fish, cheese, bread and butter, cakes (and tea!).

Here are a few of my favorite recipes, which I experimented with while my hostess was away at her “work.” Her food cooling apparatus is always quite low on the staples of life, so I made do with what little I could find.

Peel and slice cucumber. Sprinkle the slices with vinegar and let sit for half an hour, drain and pat dry. Make the sandwich with 1 or 2 layers of cucumber slices, on thin bread spread with butter. Slice neatly into quarters (remove crusts!) and serve.

Devonshire Clotted Cream (warning! This is not a true clotted cream. I devised this with the use of that wondrous blender)

Rose Butter (a most elegant spread for toast, sandwiches, scones)

Line the bottom of a covered dish with a thick layer of petals. Wrap butter with waxed paper and place in dish. Cover with more petals. Put lid on dish and let sit in cool space overnight.

I’d love to go to tea at your place, my Lady! đź™‚ Yes, I’m from the colonies, and the tea that I mostly drink if I drink it at all is Diet Snapple Iced Tea. đź™‚ Sorry about that.

I tend to have hot tea when I’m sick, and I usually always have Earl Grey. But back in high school, my very ex-friend and me drank it a lot. Ah, you see, there is this French bald Captain with a British Accent who always had it, so we always had to have it too. Especially when she came over to my house. LOL

And we’re always low on the staples of life. I mean, the last time I had chocolate was for Easter!! đź™‚

Lois, who would love to see the Rose butter herself. đź™‚

Lady C, do you eat the rose petals??? It sounds delicious anyway.
Janet (a great fan of a nice cup of tea!)

Mmm, that clotted cream recipe looks yummy. Not at all fattening, I’m sure.

Janet, maybe one could use the Rose butter in other ways. In deference to Lady Cordelia’s sensibilities I leave that as an exercise to the imagination. đź™‚