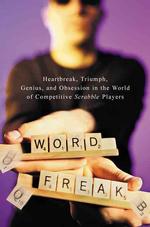 All writers have an extra-special fascination with words; they’re our toolbox, the hammers that drive in the nails. My word fascination started when I was about nine years old, and my also word-loving parents brought the game Perquackey into the house. The game is basically an anagram game, with the point being to make words out of letter cubes. Within about a month, I was beating my parents. Since then, no-one has ever beaten me at the game, and it’s also given me a life-long obsession with anagrams. When I’m particularly stressed or worried, I start doing anagrams in my head, and I’ve developed certain rules for my anagramming to make it interesting.

So when my book club read Word Freak: Heartbreak, Triumph, Genius, and Obsession in the World of Competitive Scrabble Players a few years ago, I was in alt. Finally, I was reading about people even MORE obsessive than I was.

And its author, Stefan Fatsis, revealed a new type of word obsession, I was even more excited. He talks about names and words that have each and every vowel once and only once: Julia Roberts, for example (sidenote: My best friend, whom I call the Picky Vegetarian, has one of these names. Do you know how excited I was when I figured that out? She almost became my ex-best friend, I went on and on about it so much). Since then, I’ve added that obsession to my repertoire, and am excited to find words like “sequoia,” “Metalious” (as in Grace, author of Peyton Place), and “auctioned,” “cautioned” and “education,” which have the bonus of being anagrams of each other.

It makes sense, then, that I would have signed up for the daily email of Worthless Word of the Day. The email yesterday had this gem that was right up my alley:

this is one of those words that contains the 5 vowels (aeiou) in alphabetical order without repetition; some that are more(?) common: facetious, abstemious, arterious, arsenious,adventitous, abstentious, bacterious, and tragedious — the shortest word of this type seems to be the obs. term aerious (7 letters), meaning “airy” (if you’d like to include ‘y’,you can add -ly to these; e.g., facetiously) hence, gravedinously, I suppose.

Oh, words just make me shiver. Some of my favorite words are interstitial, penultimate, roil, internecine and solipsistic. Do you have any favorite words? Or word/language obsessions? What are they? Which authors seem to have an especially developed word obsession?

Thanks for feeding my obsession,

Hmm… I ought to be more word-obsessed, being a writer, but I am more fascinated by characters. In my own work I have to meticulously check for overused words. Every time I reread a scene there seem to be more! I tend not to notice overused words in books I read. Not unless the heroine’s eyes are likened to tourmalines 9 times in the course of one book.

But I am glad to have writerly friends who remind me of how amazing words can be.

ahhhh, penultimate. I do love penultimate. Just before last. Except when people try to use it in the sense of “acme” or “height of success.”

(If a chocolate sundae is the ultimate dessert, then the banana split is NOT the penultimate. That usage makes me crazy. And I have a collegue who uses it this way All The Time. Snort.)

My favorite silly word? Antepenultimate. As in, third from the last. So silly.

I was just reading a box set’s liner notes (Isley Bros., not that it matters) and they misused “penultimate” that way.

When I’m particularly stressed or worried, I start doing anagrams in my head

OMG. I do that as well. I even do it to car licence plates when I’m on road.

It’s funny because I generally can’t spell, but when in Scrabble mode, I become the Queen of Spelling. It’s really strange.

Yeah, I do it all the time–license plates, street signs, names. How bummed was I when I figured out my first name anagrammed to “mange?”

Always nice to find someone with a similar obsession.