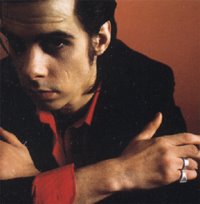 I like my art over the top. My favorite movies, actors, books, music, paintings and couture all share the common element of being pushed further than it might seem possible. Recently I found something I thought epitomized what pushed something in my opinion from “good” to “special.”

Nick Cave is most famous for being a musician, but he is also a writer, most recently penning the script for The Proposition starring Guy Pearce. I bought a book of his writings recently–song lyrics as well as fragments of short stories and an essay or two–and found something he wrote about the German band 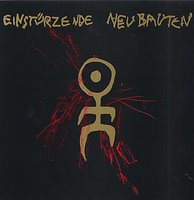 “They are simply a ‘great’ band–and I use the word in the classical sense. To me, the essence of their greatness does not lie in their unorthodox attitude toward making music–rather it is based on a fundamentally orthodox premise. What makes Einsturzende Neubauten great in my eyes is the same thing that makes Johnny Cash–or the Velvet Underground, John Lee Hooker, Suicide, Elvis, Dylan, Leadbelly, The Stooges–great. They are all innovators but what sets Hank Williams apart from the bulk of his contemporaries is the same thing that sets Einsturzende Neubauten apart from the huge, faceless morass that modern New Wave music has become. Through their own hard work, by steadfast lack of compromise, through the pain of true self-expression, through a genuine love of their medium, they have attained a sound which is first authentic, and which is utterly their own. But not for the sole purpose of being different. They are a group which has developed its own special language for one reason–to give voice to their souls.”

My goal, when I write, is to give voice to my soul, even though that might sound pretentious coming from someone who writes fairly light romance; the means here, the motivation, is more important than the end. I might never feel as if I have truly developed my own ‘special language,’ as Cave says; but I can strive for that goal. No matter what genre an author writes in, in what style, I think the reader can tell when a soul has been given voice. Your favorite soul vocalists are no doubt different than mine (and I’m not talking Aretha). But what they share is an authentic sound.

What do you think makes a great artist?

Someone whose work–every note, nuance, word–speaks directly to you and sends shivers down your spine. I can’t think of a writer who does this consistently, but a singer who did/does it is Maria Callas–even when things weren’t right technically her voice punched you in the gut (in a good sort of way).
Janet

I think it’d be hard for any artist to do this consistently, I just like it when the artists truly go for it, like you describe Callas as doing. And as EN does for Nick Cave.

Okay, you all are going to roll your eyes, but this is what struck me so forcefully about Gerard Butler’s performance in the Phantom of the Opera. I only vaguely knew who he was before watching the movie on HBO.

One really had the sense that he was “giving voice to his soul.” The emotions were raw and real. I’ve watched the movie several times (stop laughing)and I’ve come to realize how imperfect his singing voice was technically, but how perfect it was for conveying the voice of his soul. He “went for it” in that performance, and lots of women like me were totally blown away.

I’d love to achieve that kind of intensity in my writing. I realize I need to “go for it” on every page, not hold back.

No, Diane, no laughing–your reaction is exactly what I meant by posting that quote.

Clive Owen (now, you all stop laughing) makes me feel as if he is totally going for it. I love that intensity.

And in books, Anne Stuart does it, as does Laura Kinsale, Judith Ivory, Mary Balogh. Not every book, not every time, but you get the feeling they are pushing themselves into an uncomfortable region. I want to do that, too.

I am currently rereading Laura Kinsale’s FLOWERS FROM THE STORM to map it to Hero’s Journey as an exercise with my critique buddies, and I continue to be blown away by the emotional intensity she puts into each and every scene.