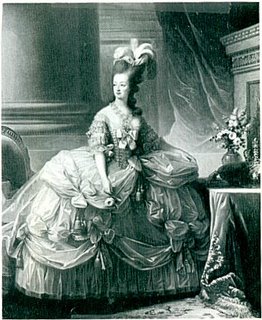 As I’ve probably posted here before, I love movies. I’m by no means a Cinema Expert, like a friend of mine who was a Film Studies major. I don’t much like going to the movies with him because afterwards he always wants to talk about camera angles and filters and other techie stuff I don’t understand. I just want to talk about the characters. And the dialogue. And the costumes. All much too amateur for him. đź™‚

Anyway, I do enjoy movies. So, I’ve been following the news out of Cannes this week. I love Cannes, too, for being so goofball and overblown and, well, so French. Who else boos movies? Not the Canadians, I bet. Toronto is probably far more civilized and not nearly as much fun. I’d like to know what all those actresses are thinking when it comes to their gowns, though. Kirsten Dunst, who I like because she’s usually so quirky and cute, gets herself up to look like Fraulein Maria at the abbey for her big premiere??? Monica Belluci in a Christmas tree skirt trimmed with feather dusters??? This is France, people! FRANCE! (Sofia Coppola sure had some great shoes, though).

But I digress. Fashion will always do that to me. I’m here to talk about movies. I think. One movie in particular–Marie Antoinette, the one reportedly just booed at Cannes by moviegoing members of the “petit bourgeois” (according to one French critic). Now, I haven’t seen this film–it doesn’t open here until October. I’ve only seen a trailer, and I don’t know why it was booed (though I’d dearly like to find out). I will definitely see it, for the elaborate costumes, Versailles, the reported neo-punk soundtrack, and because I’m always a sucker for overblown, pre-Revolutionary shenanigans. But I have some reservations, mostly about the casting. As I said, I do like Kirsten Dunst. But does “quirky” equal “Austrian princess in powdered wigs”? Just not sure. I also don’t know who I would cast instead, if it was MY movie. Maybe Anne Hathaway? Or Emmy Rossum, if she wasn’t so tall?

Anyway, here is your task, if you choose to accept it. Let’s imagine we’re making a film about, say, the life of Byron (forget the one from the BBC a couple years ago–ours will be better!). Who would you cast in the lead parts? As Byron? (I would vote for Johnny Depp, I think. Or Keanu Reeves, if he had the acting skills to equal his looks, darn it). Caro Lamb? (Now there would be a part for Kirsten Dunst!). The Shelleys? Annabelle Milbanke? Lady Melbourne?

Serious and/or goofy answers all happily accepted! As are suggestions for Marie Antoinette. Or any other movie you choose to make. YOU are the director now! I may even give away a free book to the most, er, creative ideas…

18 Responses to You Be the Director!