Oh, happy days! Sharpe has come to BBC America, Saturday nights at 9 pm, right after one of my favorite shows, Cash in the Attic.

Richard Sharpe, for those of you who may not know, is a fictional soldier in the Napoleonic War, created by Bernard Cornwell in a wonderful series of books, now spanning his early years with Wellington (then Wellesley) in India to beyond Waterloo. Sharpe is a marvelous character and Cornwell does a masterful job of giving us such rich detail about the war, so that you actually feel as if you are there, experiencing it with Sharpe. 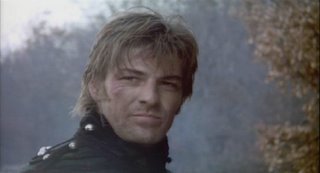 The BBC Sharpe is played by Sean Bean, a very sigh-worthy choice.

Here is what Sean Bean’s Sharpe website http://www.shipofdreams.net/seanbean/sharpe/index.htm
says about the BBC series:

“The films are based on the Napoleonic campaign novels, and follow Sharpe and his “Chosen Men” (riflemen who are trusted crack shots). Sharpe has been promoted from the ranks, very unusual in its day, so he has the resentment of the “gentlemen” officers, and also that of the men, who assume he is no better than them. He is promoted after saving Wellington’s life, and is often sent on dangerous missions, along with the Chosen Men, due to his skills and bravery.

In the first film, Sharpe’s Rifles, we are introduced to the Riflemen who will become the Chosen Men, and Sharpe has to forge both respect and friendship with their soon-to-be Sergeant, Patrick Harper. The later films show how cohesive a fighting force these few men become, they think and act as one. The last film to be made was Sharpe’s Waterloo, depicting the great battle.”

I was first introduced to Sharpe through the Chivers Audiobook versions. William Gaminara narrated, and his deep, sexy voice truly enhanced the experience. I can still him say, “Sharpe swore.”

Sean Bean is not the Sharpe I visualized while listening to the audiobooks. In fact, almost all the cast of the BBC version are not the people Cornwall gave to my imagination. Furthermore, I think of the BBC shows as “Sharpe Lite.” The shows meld elements of several of the books into one story, but cannot give the richness of detail that is in the books. Another point–these were not high budget productions, so rather than a cast of thousands, you get a cast of….dozens. 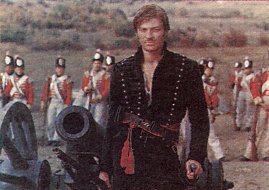 Cornwell also is no romance novelist. His Sharpe is actually quite stupid in love, which is quite frustrating, but even unsatisfying romance elements were not enough to keep me from loving the books, the character, the life of the Napoleonic soldier.

And the Sharpe films, for all their not being the Sharpe of my imagination, are still wonderful. If you don’t get BBC America, you can also rent the Sharpe films from Netflix or purchase them online.

I Tivo’d this Saturday, so plan to watch it soon. Can’t wait!

I taped it Saturday! Haven’t watched it yet. Been writing and cooking and eating.

I have Sharpe’s Rifles, but I’m looking forward to the rest of the series, of which I’ve seen only parts. I have read a few of the books, too; the rest are on that ever-growing TBR list.

Something I wonder about. In historical romance, there are so many fantastic heroes who have returned to England from the war, but no stories set in the Peninsula.

I have heard it said that romance readers don’t want stories set outside the British isles. Yet Sharpe is so popular. I know of a few other writers working on Peninsular war stories. I even have one in my idea file, though it’s not the story I want to write most at this moment.

If there are even a few writers wanting to write such stories, doesn’t that mean there are readers for them out there, too?

I watched it on Saturday and it was just as fun as I remembered! Can’t wait for the new installments!

Elena, I, for one, am hungry for Regency stories set outside of England. I even get jazzed when a story is set in Bath or Brighton! Not that I don’t love the UK, but it is refreshing when a story deviates from the same old London drawing rooms. Of course, I may not be typical reader…

Carla Kelly’s “The Wedding Journey” took place on the Peninsula, and her “One Good Turn” had strong connections to the war as well, with the heroine a victim of the carnage at Albuhera, I think.
I have half of an idea for a story set in the Peninsula….

I am definately one of those romance readers who would love a Pennisula based Regency!! I loved both of those Carla Kelly books and are on my keeper shelf. Thanks goodness for the UBS!!

So, if any of you are penning one or thinking about penning one…GO FOR IT!

I don’t get BBC America but I am going to get my hands on these books. They sound facinating!

Am I the lone dissenter?

I first saw Sean Bean (btw, do you pronounce it Shawn Bawn or Seen Bean?) in Lord of the Rings where I liked him a lot. I’ve liked him in other things, too. But Sharpe, with those impeccably capped teeth and impeccably layered haircut and mumbling toughly (sorry) out of the side of his mouth, is a bit too idealized for me. And far too clean. Barely warrants a good bath with me scrubbing his back.

And that horrible soundtrack with the electric guitar and the tooting trumpets to remind us (a) we’re in Spain and (b) in a military setting. The battle sequences reminded me of Monty Python scenarios.

But I may watch next week–after all, there’s always the chance he’ll take that uniform off…

Janet, that’s why I call it “Sharpe Lite” and why I think Sean Bean, as “scrub-worthy” as he may be(g), is not the Sharpe of Cornwell’s books. That Sharpe is tall and dark-haired and just “looks” different to me.

I know you are thinking I have Gerard Butler in mind for Sharpe (tall, dark and handsome), but I don’t! My image of Sharpe pre-dates my love affair with GB.

While I’m at it, Harper is all wrong in the series. Harper was not a handsome man and was bigger than Sharpe, a huge imposing man.

But I still think the series is fun, because it is set in Naponleonic war – English against French, showing rifles and uniforms and stuff like that.

I like the Rod Steiger movie of Waterloo for the same reason – it shows the battle! – but it is a boooorrriing movie.

Vanity Fair, the BBC version of Byron, Gyneth Paltrow’s Emma – I like them all because they are “our” time period!

I enjoy the Sharpe movies, too! Though you’re right, Diane, Sean Bean isn’t really the Sharpe of the books. I still like them because they’re set in the Regency period, and there just isn’t enough of that in the world. 🙂

Snort! What don’t you have Gerard Butler in mind for, Diane…
Janet

I love the Sharpe TV series! I haven’t read the books, I confess, so Cornwell’s original Sharpe doesn’t mar for me Sean Bean’s portrayal in the slightest. Ignorance, as they say, is bliss…quite a lot of bliss, in this case.

BTW, Diane, the Carla Kelly book had Badajoz as the past battle. (As soon as I learned that, I knew it was going to be a traumatic book. And it was. Sieges have always throughout history been particularly brutal, from what I’ve read, and Badajoz was no exception.)

In fact, one of the Sharpe novels–sorry, can’t remember which one!–is set around the siege of Badajoz, and made it sound truly, truly horrific. In Elizabeth Longford’s biography of Wellington, she says that after the siege five thousand men of Wellington’s army lay dead in the ditch around the city, and the survivors took their revenge on the populace for days afterwards. (Of course, I know you already know all that. But I thought everyone who didn’t know should also know, and also that they should know that I know, and that I know that you know.)

I like the Sharpe novels very much. The movies aren’t as good as they would be with a much bigger budget–there is really no substitute for large numbers of men. And certain things are hard to fake. For instance, in the Sharpe movies they indicate a cannonball striking by having an explosion of smoke where it hits. Needless to say, this is not at all how cannon fire would actually look, but it’s hard to fake a big iron ball blowing people to bits. (And it would also be rather too gruesome for TV.)

But in spite of that, I like the movies too, and have them all on tape. (Ah, those innocent days before DVDs!)

Todd, I can only say one thing—-What do ya know? I knew you knew and knew we knew too.

I don’t think you need a big budget/large crowd to do a battle scene convincingly. I thought the Battle of Waterloo in the BBC’s Vanity Fair (made a couple of years before the R. Witherspoon one) was done brilliantly, all close ups and sound effects, and obviously not with a cast of thousands.
All in the execution…
Janet

Sharpe is Back! – Risky Regencies

[…] dished on the Sharpe series in an old Risky Regency blog and my thoughts are pretty much the same then as now. Here they are, edited for […]