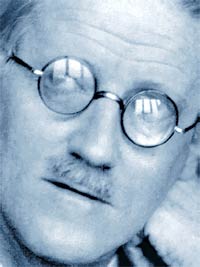 First off, may I just be so bold as to say “great minds think alike?” Amanda has a post on her blog about Bloomsday, also, although the smarty-pants actually finished the darn thing.

Me, I made it to the second page.

Elena had a post awhile back about giving up on books–I think most of us agreed that we didn’t used to, but time was too short, and there were too many books to read, to waste time on a book that wasn’t grabbing you. I think Joyce’s Ulysses is just too smart for me (I really admire, however, the premise behind Bloomsday: Ulysses recounts a modern-day traveler’s odyssey through Dublin on June 16, so Bloomsday celebrants relive Ulysses’s progress. Here in New York City, Symphony Space hosts a 12+-hour event to celebrate. So happy Bloomsday, everyone!)

But back to where I was attempting to go with this, albeit in a most Framptonian circuitous manner. I gave up on a book recently, one much less erudite (with less crudity) than Joyce’s because it was too slow. Was it me, or the book? The book was published in 2002, which means the author wrote it sometime in 2000 or so. I think that in that time, readers have come to want a different style in their romances. Instead of long, descriptive narrative, now most top-of-the-charts romances have tons of dialogue. Instead of love stories that take at least six months to begin and culminate, we’ve got stories that can take place over the course of a few days to a month. Is our attention span that much shorter?

Personally, I like the dialogue-heavy books. And I have a theory about how this sea-change happened: Julia Quinn. Julia Quinn writes amazing dialogue, light, witty banter that reveals loads about the character speaking, and she doesn’t spend a lot of time on description. Her books are a breath of fresh air.

Are the newer romances an improvement over the slower ones? Do you value dialogue over narrative? Which authors would you like to see stretch out their prose? What do you think of my theory?

Ha! At the risk of being painfully skewered by Quinn fans, I don’t think that this is just a Quinn thing. Jennifer Crusie has some fantastic dialogue. In fact, I consider her to be the Queen of Dialogue. So also does Susan B. Phillips. I’ve tried reading Quinn several times but her books are all dialogue and give me a headache.

You’re right, Sandy! I think I was thinking in a historical romance context. But you’re right, anyway. My head is fuzzy. Too much non-Joyce.

Actually, I should say I was thinking ONLY of historical romance, since I’m not nearly as familiar with contemporary, although I do love both JC and SEP.

But I think you may be right about people having shorter attention spans. Everything these days is NOW, NOW, NOW! Whatever happened to Anticipation (ok, now I’m singing that old song and seeing bottle of Heinz ketchup *sigh*).

I think you are on to something Megan, more and more lately I’ve found myself skimming through long descriptive passages to get to the dialogue. And back in the day I’d NEVER have done that. Or gotten impatient with description.

But with some authors, like Loretta Chase and Julia Ross, the eloquence of the descriptive prose makes the work richer and I don’t skip a word. Or Eloisa James, who I think does a good job of blending the dialogue with the descriptive.

JQ has spawned quite a few imitators, but they aren’t all as good as she is at it.

And coincidentally, I’m a cataloging librarian. And what should have crossed my desk today but the journal Two Worlds Monthly, which published ULYSSES in serial form four years before it was published in book form in the US. Talk about serendipity…

Though I’ve enjoyed the couple of JQ books I’ve read, I prefer more richness. Just flipping through one of hers, I’m remembering, for instance, that settings are usually “the ballroom” or “an elegant drawing room”.

Though I have read books where narrative and navel-gazing go on too far for me, I do want more than cute banter. Nothing against JQ and her fans, tastes vary and there’s nothing wrong with that. But my personal favorite reading experiences comes from authors like Julia Ross and Laura Kinsale, where all the elements suck me in: setting descriptions, body language, internal dialogue.
It’s what I’d like to write, so I hope others want to read it, too.

First of all, yes I have read Ulysses (big achievement in my life, I’m sure, LOL), but it took me years and years. I started it in high school and read the last page last year. I’m not telling exactly how long that it, but it is quite a while. 🙂 I love the idea of Bloomsday, though, because it seems so quirky and odd and goofy, while also being sort of intellectual. I’m big on quirky.

And I totally agree with Elena. I love the whole package in a book–well-drawn setting, realistic dialogue, characters with an internal life. Books that are dialogue-heavy are fine when I need something lighter to read (this is when I turn to JQ), but often I start thinking “Jeez, shut up already!” Then again, when description goes on and on I get impatient. I’m just picky, I guess. 🙂

“Ulysses” is one of a distinguished group of books: those that I read about half of, then stalled out, but always mean to return and finish someday. Sometimes I even do. Happy Belated Bloomsday!

I like a balance of dialogue and description. (Well, OK, who doesn’t?) When I was a kid I tended to skim over long passages of description–or even, if the truth be known, skip them entirely–but I like to think that I’ve matured a bit as a reader since then. 🙂

I did read this obscure novel recently–what was it called, “The Michelangelo Code?” “The Raphael Code?” Something like that–in which, very puzzlingly, big chunks of stuff was in narration that could easily, and more successfully, have been done in dialogue. I guess it takes all kinds.

My first reaction is that just a few years seems a very brief time for a big change to take place. That said, I don’t read enough historical romances to have noticed this change, if it did happen!

I’ve always favored books with lots of dialogue, and not much description. Narration (action scenes, etc) is fine by me, but I’ve always found description very slow going. (It’s also my weakest point in my own writing, and what I’ve had to work on the most.)

But dialogue is just a joy for me to read. Perhaps that has something to do with my liking for seeing plays??? 🙂

BTW, back in the 1970’s and 1980’s, some of Joan Smith’s Regencies were almost pure dialogue. I mean, much more than you would see anywhere nowadays. Whole chapters with nothing but dialogue, and rarely even a dialogue tag or quick mention of action to break the pace. All facial expression, tone of voice, etc, was conveyed through dialogue. Very different from what you see nowadays. (I used to read her stuff and say, hey, SHE doesn’t use any stupid five senses! Why do I have to!) 🙂 (Okay, that’s an exaggeration.)