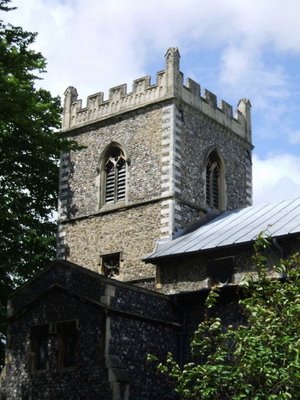 CARA PROJECT #1: A light-hearted Regency romance that’s a bit of a Cinderella story. My heroine Ruth (yes, she’s a poor parson’s daughter!) is clever and witty and quite underappreciated. She’s also stuck in the middle of the most lonesome part of Norfolk (full of pretty flint churches, like the Norfolk church pictured here). As she’s a proper young lady, she can’t escape except through marriage:

She could not travel without a husband, and she was not likely to find a husband while living in a nowhere part of England known only as “take the smaller road north from Little Ellingham, pass the village of Ipsham, and stop before you reach a large herd of sheep.”

There were few men in this corner of the world, and most of them owned more canes than teeth. And even if eligible gentlemen ever appeared–if they were lost, for instance–she knew they still wouldn’t want to marry her.

She had sense enough to know that men wanted more than just sense in a wife. They wanted a pretty face and a docile spirit, sparkling conversation and at least some semblance of a bosom.

This project is currently being considered by an editor at a publisher that will remain nameless, lest I jinx myself. (Knock wood, fingers crossed, et cetera.) 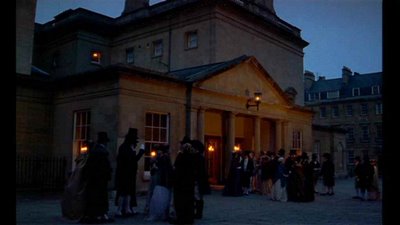 Another Regency, this novel borders on farce, and is set in Bath, beautiful Bath. (My heroine will of course visit the Upper Rooms, pictured here — the photo’s from the movie of “Persuasion.”) My youthful heroine, Essie, has far more enthusiasm than prudence:

“I shall be so good, you will not even know me! I promise not to gossip, or get into scrapes, or complain about anything. That is, I shall certainly try,” she amended, recalling that she was also not to make promises she could not keep.

If the aforementioned publisher buys Project 1, then they will hopefully want Project 2 as well — which will be a lot of fun to write. (It’s only just begun, as the song says…)

CARA PROJECT #3: I have a young adult novel — partly a romance — that I am currently shopping about. This is about the adventures of a high school student who starts dating a college guy — and not just your average college guy, but an engineering student at a nearby technical college.

You could hardly call me cute. Stick-figure skinny is more like it. You ever heard of those things called breasts? Yeah, me too. Unfortunately, my knowledge is entirely theoretical. It’s not like I’ve ever actually owned a pair.

( You may notice that this heroine has a similar problem to Ruth in Project #1! Ah, the concerns that span the ages…)

CARA PROJECT #4: I have begun a new young adult novel, this one with a paranormal twist. I can’t say any more — my muse has sworn me to secrecy…

Well, that’s (most of) what I’m up to, barring a few science fiction short stories, and a play I want to write. (What was that? Did someone say I’m writing in too many genres? No, surely not.) đź™‚

Well, here’s a question for those of you who’ve actually read this far (or just skipped to the end): what young adult novels (if any) did you love when you were a teen? (Or which do you love now, if you are a teen, or if you’re still reading YA, as I am?)

This entry was posted in Risky Book Talk and tagged Cara King. Bookmark the permalink.

14 Responses to What Cara’s Been Doing